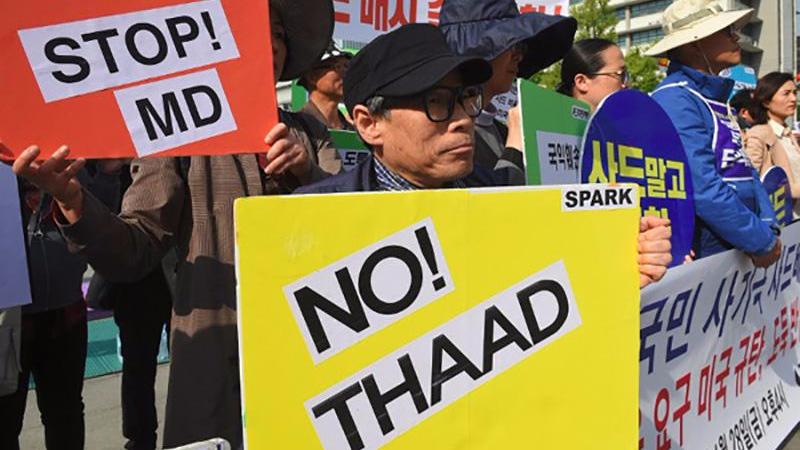 ROK protesters hold placards during a rally against the deployment of the US Terminal High Altitude Area Defense (THAAD) system near the US embassy in Seoul on April 28, 2017. (JUNG Yeon-Je / AFP)

SEOUL - The Democratic People's Republic of Korea (DPRK) suggested on Monday it will continue its nuclear weapons tests, saying it will bolster its nuclear force "to the maximum" in a "consecutive and successive way at any moment" in the face of what it calls US aggression and hysteria.

The DPRK's statement came as the CIA director is making an unannounced visit to ROK, the US Embassy in Seoul confirmed Monday. An embassy official said Mike Pompeo and his wife were in Seoul on Monday, but wouldn't say for how long. He spoke on condition of anonymity because he was not authorized to speak to the media.

ROK media reports said the CIA chief arrived in ROK over the weekend for meetings with the head of ROK's National Intelligence Service and high-level officials in the presidential office. The U.S. official, however, wouldn't confirm any meetings beyond ones with officials at U.S. Forces in Korea and the U.S. Embassy. U.S. President Donald Trump has said a "major, major conflict" with DPRK is possible over its nuclear and ballistic missile programmes, while China urged restraint on the Korean peninsula last week.

In a show of force, the United States has sent the nuclear-powered USS Carl Vinson aircraft carrier group to waters off the Korean peninsula to join drills with ROK to counter a series of threats of destruction from DPRK.

The Japanese destroyer Izumo, a helicopter carrier, departed from Yokosuka port south of Tokyo in the morning.

Japanese media reports said it will meet up with and escort a US supply ship, a first-time mission under new security legislation that allows Japan's military a greater role overseas. They said the US ship is expected to refuel other American warships, including the USS Carl Vinson carrier strike group.

Japan's Defense Ministry only said that the Izumo would participate in an international naval event in Singapore on May 15.

"Now that the U.S. is kicking up the overall racket for sanctions and pressure against the DPRK, pursuant to its new DPRK policy called 'maximum pressure and engagement', the DPRK will speed up at the maximum pace the measure for bolstering its nuclear deterrence," a spokesman for DPRK's foreign ministry said in a statement carried by its official KCNA news agency. 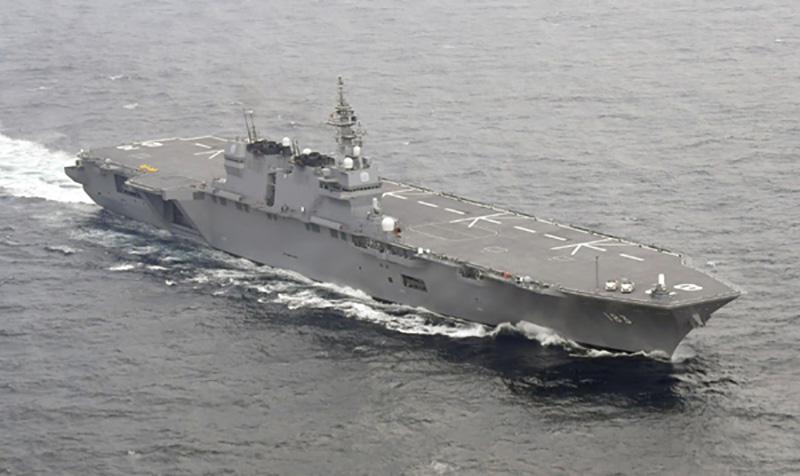 Japan's helicopter carrier Izumo sails in the waters off the Boso Peninsula, east of Tokyo, as it starts to escort a US supply ship after departing Yokosuka port, south of Tokyo, May 1, 2017. (Ren Onuma / Kyodo News via AP)

DPRK has carried out five nuclear tests and a series of missile tests in defiance of U.N. Security Council and unilateral resolutions. It has been conducting such tests at an unprecedented rate and is believed to have made progress in developing intermediate-range and submarine-launched missiles.

It test-launched a missile on Saturday which Washington and Seoul said was unsuccessful, but which nevertheless drew widespread international condemnation

ROK said the United States had reaffirmed it would shoulder the cost of deploying the Terminal High Altitude Area Defense (THAAD) anti-missile system to counter the DPRK threat, days after Trump said Seoul should pay for the US$1 billion battery.

Protests against the deployment of the U.S. missile defense system continued Monday. About 150 residents and peace activists blocked the entrance of police buses to a golf course in the southeastern part of the country, where part of the THAAD elements were already installed.

From about 7:30 a.m. local time, a higher-than-usual number of police buses tried to enter the golf course. About 30 buses were carrying some 1,200 policemen, according to photos and documents released by the residents and the activists who have stood sentry right beside the entrance road to the THAAD site.

Sim Sang-jung of the progressive Justice Party, one of the five major presidential candidates, visited the Soseong-ri village in Seongju county on Sunday to meet and talk with the residents.

Sim has strongly urged for the reversal of the THAAD deployment.

At about 1:00 p.m. Monday, the residents decided to let the police buses pass the entrance road as it would be a normal replacement of policemen.

In Seoul, three Won Buddhist monks launched an indefinite hunger strike in the Gwanghwamun square just one day after part of the THAAD elements were deployed on April 26. Their strike would last until the U.S. anti-missile system is completely pulled of out ROK.

Moon Jae-in of the biggest Minjoo Party, a months-long frontrunner in recent presidential polls, reiterated his position that the final decision on THAAD must be made by the next government.

The country's presidential election is scheduled for May 9 as former President Park Geun-hye was impeached in March over corruption allegations.