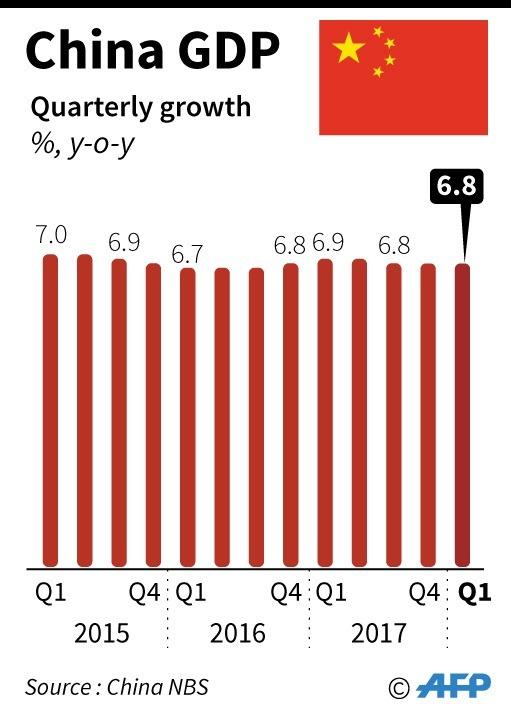 BEIJING - The Chinese economy saw a solid start to the year with a 6.8-percent growth in the first quarter of 2018 from a year earlier, official data showed on Tuesday, slightly above expectations and unchanged from the previous quarter.

The data points to continued resilience in the world's second-largest economy.

China's Gross Domestic Product (GDP) reached 19.88 trillion yuan (about US$3.2 trillion) in the first three months of 2018, up 6.8 percent year on year at comparable prices, unchanged from the growth rate in the previous quarter, according to the National Bureau of Statistics (NBS).

"The economy is off to a good start," NBS spokesperson Xing Zhihong told a press conference, noting sound momentum in development, steady progress in upgrading, and improved quality and efficiency of the economy.

The GDP growth rate has stayed within the range of 6.7 percent to 6.9 percent for 11 quarters, with the unemployment rate and inflation remaining stable, he said.

The country's foreign trade has become more balanced since the start of this year, with import growth outpacing exports and the trade surplus narrowing, according to Xing.

Increased efforts to reform and open up boosted market confidence, with the manufacturing activity expanding for the 20th straight month in March and the consumer confidence index at a relatively high level, Xing said.

With seasonality excluded, the positive trend remained unchanged, he said.

"Looking ahead, the favorable conditions and factors to support high-quality development are increasing, and the economy will continue to maintain stable development with a positive outlook," he said.

In March alone, growth stood at 6 percent, according to NBS."China's industrial production generally held steady," the NBS said in a statement on its website.

NBS spokesperson Xing Zhihong attributed the slowdown to the impact of the Spring Festival holiday period.

Production in high-tech industries and the equipment manufacturing sector expanding by 11.9 percent and 8.8 percent, respectively.

Industrial output, officially called industrial value added, is used to measure the activity of designated large enterprises with annual turnover of at least 20 million yuan (about US$3 million).

Output of new energy vehicles saw a surge of 139.4 percent year on year during the period, while industrial robot production jumped by 29.6 percent, NBS data showed.

The mining sector grew by 0.9 percent year on year, lagging behind the 7-percent growth achieved by the manufacturing sector.

The growth is 0.4 percentage points lower than that of the first two months of this year.

In breakdown, FAI in agriculture was up 24.2 percent year on year, followed by 10 percent for the service sector, and 2 percent for industry.

Investment growth picked up in the eastern regions of the country.

Investment in real estate, a crucial driver of the economy, accelerated to 10.4 percent in the first quarter -- the fastest pace in three years. That compared with a 9.9 percent rise in the first two months of this year and a 9.1 percent expansion in the same period in 2017.

March retail sales rose 10.1 percent from a year earlier, the strongest pace in four months, with consumers buying more of almost everything from cosmetics and clothing to furniture and home appliances.

ALSO READ: China means business when it comes to opening up