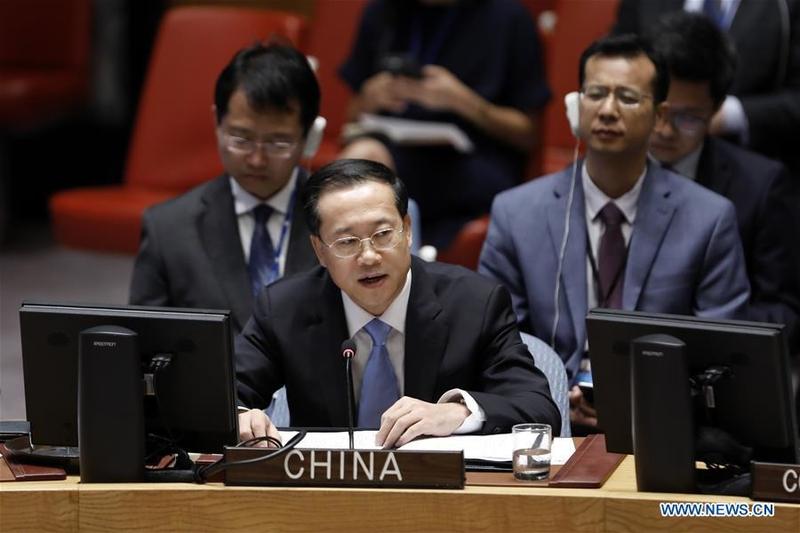 UNITED NATIONS — A Chinese envoy said Tuesday that China attaches great importance to the humanitarian situation in Syria and urges the international community to find a solution to the Syrian issue.

Noting that the Idlib problem is attributed to the terrorist forces who have controlled the region, the Chinese ambassador said, "We should harmonize the criteria in our fight against all terrorist organizations listed by the Council."

"The local terrorist groups not only violate the rights of civilians and humanitarian workers, but also frequently attack Russian military bases and the Syrian government-controlled areas, threatening the security and stability of Syria and the region," he said.

"Without eliminating the threat of terrorist organizations in Idlib, the Syrian people will not have peace, nor will the humanitarian problems faced by the people in Idlib be fully resolved," the Chinese envoy noted.

"China supports Russia and Turkey in continuing to implement the memorandum and the efforts to seek comprehensive and long-term solutions through dialogue and consultations," Ma said. "China also supports the UN and other relevant actors in their humanitarian relief operations for the displaced civilians and their efforts to improve the humanitarian situation in the northwest."

Russia and Turkey signed a memorandum of understanding in September 2018, reiterating their determination to combat terrorism in all its forms and manifestations with a view to maintaining stability in northwest Syria.

"We have seen that since the beginning of this year, there has been a massive influx into the Al Hol camp of civilians from the northeastern part fleeing conflict," said the Chinese envoy, noting that the population of the camp has soared to 73,000, and "the composition is very complicated."

The Chinese ambassador stressed that humanitarian efforts "must be scaled up" for the people in the camp based on the demographic feature of the population there, and proper arrangement should be made for their settlement.

"For the Rukban camp, there have been different ideas from the international community for solutions," said Ma, noting that "dialogue and communication should be enhanced in order to arrive at agreed solution as soon as possible."

China will continue to contribute to alleviating the humanitarian situation in Syria. To the best of its ability, the international community must continue to increase humanitarian relief to Syria and fulfill its aid commitments

"China supports the Syrian government in actively taking measures to ensure the necessary living conditions for those who live in the camps and to end displacement in areas where security situation is relatively stable," said the envoy.

The Chinese ambassador urged the international community to support the Syrian government in de-mining, rebuilding infrastructure, restoring healthcare, education and other social services, launching industrial projects, promoting development and improving people's livelihood so that "more and more people will step out of the shadow of war and gradually lead a stable and orderly life."

"To fundamentally alleviate humanitarian situation in Syria, we must persist in advancing the political solution," said the Chinese ambassador. "The international community should firmly support the UN in playing its role as the main channel of mediation and push the Syrian parties to seek solutions that accommodate the concerns of all parties based on a Syrian-owned and Syrian-led principle and Council resolution 2254."

Ma urged the Syrian parties to "bear in mind the future of the country and the wellbeing of the people" by continuing to narrow their differences through dialogue and consultations in search of a political solution.

"Since the outbreak of the Syrian crisis, China has provided emergency food aid in multiple batches to Syria and donated medical equipment through the International Red Cross. We have provided water, food, temporary shelter, and medical services to the displaced people and returnees," he said.

"China will continue to contribute to alleviating the humanitarian situation in Syria. To the best of its ability, the international community must continue to increase humanitarian relief to Syria and fulfill its aid commitments," said the envoy.

Idlib, the last major rebel stronghold in Syria, is controlled by the Hayat Tahrir al-Sham (HTS), the umbrella group of the al-Qaida-linked Nusra Front.

Since mid-April, there has been an intensification of hostilities in Idlib, which is one of the four "de-escalation" areas agreed by the Astana guarantors -- Russia, Iran and Turkey -- in 2017.