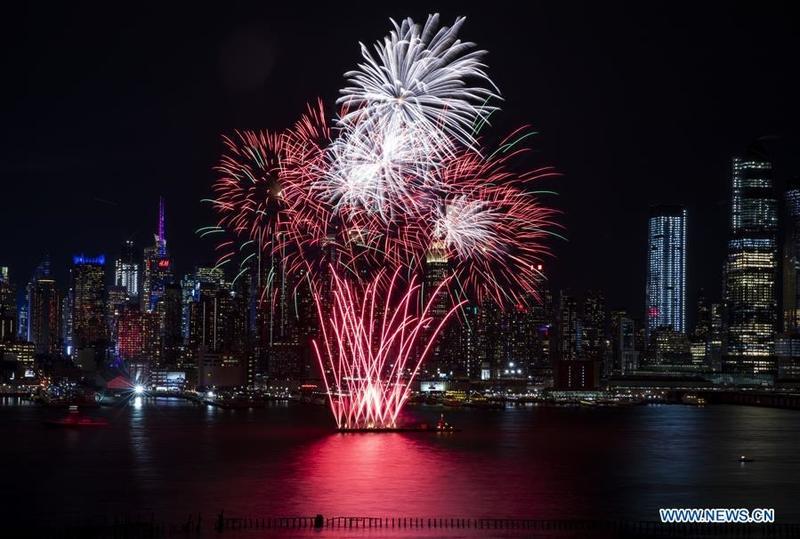 Fireworks are displayed above the Hudson River in New York, the United States, on Feb 11, 2019, to celebrate the Chinese Lunar New Year. (WANG YING / XINHUA))

NEW YORK - Cooperation remains the only right option for China and the United States, which can overcome difficulties in bilateral ties for greater mutual benefits, a senior Chinese diplomat and a veteran US expert on international relations said Monday.

Huang Ping, the Chinese consul general in New York, and Robert Hormats, former undersecretary of state of the Obama administration, shared this belief in their remarks at an event marking the 40th anniversary of the establishment of China-US diplomatic ties.

The two sides should always have "the desire to resolve problems" and "a common purpose to find agreement," said Robert Hormats, former undersecretary of state of the Obama administration

Over the past 40 years, the China-US relationship has achieved historic progress in a wide range of sectors, as cooperation keeps expanding across the board, said Huang at a grand evening reception hosted by his consulate-general.

Noting China-US relations have come to a "critical stage" where unlimited opportunities and tremendous challenges co-exist, Huang spoke out against some people's view that the age of cooperation between the world's two largest economies has passed, while competition will emerge as the new theme.

"Frankly speaking, these opinions do not show the whole picture of China-US relations. They mislead us in why we decided to engage in 1979, and have adversely affected people's positive outlook of the growth of this relationship," he elaborated.

The consul general, who arrived in New York last November, said that he has visited several major cities in his consular district during the past few months, including Boston and Philadelphia, and has sensed both peoples' strong will for communication and witnessed their great achievements in cooperation.

He urged the people of both countries to tell more good stories of cooperation between China and the United States, and strive for new breakthroughs in the promotion of a sound and healthy development for bilateral relations.

On the same occasion, Hormats told Xinhua that the two countries should always find ways of working together, because "we are too important to each other and too important to the world to allow our relationship to deteriorate into confrontation."

The two sides should always have "the desire to resolve problems" and "a common purpose to find agreement," said the former diplomat, who also served as former Secretary of State Henry Kissinger's economic advisor in the 1970s and witnessed the whole development of China-US ties.

The reception culminated with a spectacular fireworks show over the Hudson River, which was also dedicated to the celebration of the Chinese Lunar New Year, which fell on Feb 5.

Some 300 guests to the reception, along with thousands of spectators on both sides of the Hudson, enjoyed the 10-minute fireworks display, which has become a signature event for Chinese New Year celebrations in New York City in recent years.