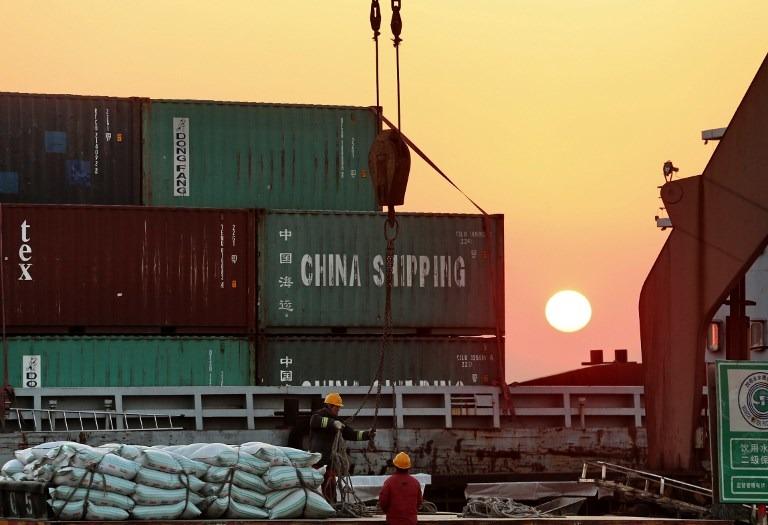 This photo taken on March 9, 2018 shows workers loading ships at a port in Nantong in China's eastern Jiangsu province. (AFP)

BEIJING - Washington is dragging Beijing into a possible massive trade war as it decided on Thursday to unilaterally impose massive tariffs against imports from China, the latest move that has posed a threat to a rule-based global trading system.

Amid strong warnings from business groups, US President Donald Trump signed a memorandum that could impose tariffs on up to US$60 billion of Chinese products, fueling fears that the world's two largest economies could be sliding towards a trade war.

In the memorandum, based on a so-called Section 301 investigation into alleged Chinese intellectual property and technology transfer practices, Trump has directed US Trade Representative Robert Lighthizer to publish a list of proposed Chinese goods that could be subject to tariffs in 15 days. For the US Treasury Department, it has 60 days to make recommendations on restrictions on Chinese investments.

Also, Washington is pressing China to reduce its US$375-billion trade surplus with the United States by US$100 billion.

The punitive actions, which came on the heels of the US government's steel and aluminum tariffs that also mainly targeted China, has been met with Beijing's tough tone and possible counter-measures.

It has heightened concerns that widespread trade battles could severely undermine the multilateral trading system and destabilize the global economy that has just recovered from a financial crisis starting a decade ago.

China announced Friday a plan for reciprocal tariffs on imported US products worth about US$3 billion to balance losses caused by the US metal restrictions against China.

The measures, or the suspension of tariff concessions, will target 128 US products, including pork, wine, and seamless steel tubes.

China will take legal action under the World Trade Organization (WTO) framework and work with other WTO members to safeguard the stability and authority of the multilateral trade rules, the country's Ministry of Commerce (MOC) said, reiterating China's stance of not wanting or fearing any trade wars.

In the name of safeguarding national security and protecting domestic jobs, Washington's arbitrary move has unleashed plenty of criticism within both countries and beyond.

The US administration should "pause on the brink of a precipice" and not put bilateral trade relations in dangerous place, the MOC urged, saying that China still embraces constructive talks in the spirit of a win-win outcome.

"If a trade war were initiated by the United States, China would fight to the end to defend its own legitimate interests with all necessary measures," the Chinese Embassy in the United States stressed.

In the eyes of trade experts and business leaders, the restrictive measures are futile to address the "unfair trade" the Trump administration has blustered for months.

Stephen Roach, a senior fellow at Yale University's Jackson Institute for Global Affairs, slammed Trump's view that protectionism will lead to a more prosperous and powerful country, saying that was a "fundamental misunderstanding between cause and effect."

Lacking a high domestic savings rate and wanting to consume and grow, America must import surplus savings from abroad while running massive current-account and trade deficits to attract foreign capital, Roach said in an interview with Xinhua.

Trade problems can only be solved by boosting domestic savings instead of imposing tariffs, he explained.

Wallace Cheng, country director for China with Geneva-based think tank International Center for Trade and Sustainable Development (ICTSD), said that targeting Chinese imports are a case of Washington "shooting itself in the foot."

The downward move will harm the US economy as American consumers will have to pay higher prices for goods, warned Fredrik Erixon, director of the Brussels-based think tank, the European Center for International Political Economy.

Erixon was echoed by senior Vice President of Nike Sean O'Hollaren, who said at a reception hosted at the Chinese Consulate General in San Francisco that "the US-China trade is not a zero sum game, and what China gained does not mean the loss of the United States."

Fears of a trade war shook the global stock and currency markets after Trump's announcement, with the benchmark S&P 500 Index slumping the most since early February and the Dow Jones Industrial Average dropping nearly 3 percent on Thursday.