US, S. Korea to hold new round of talks on military cost-sharing 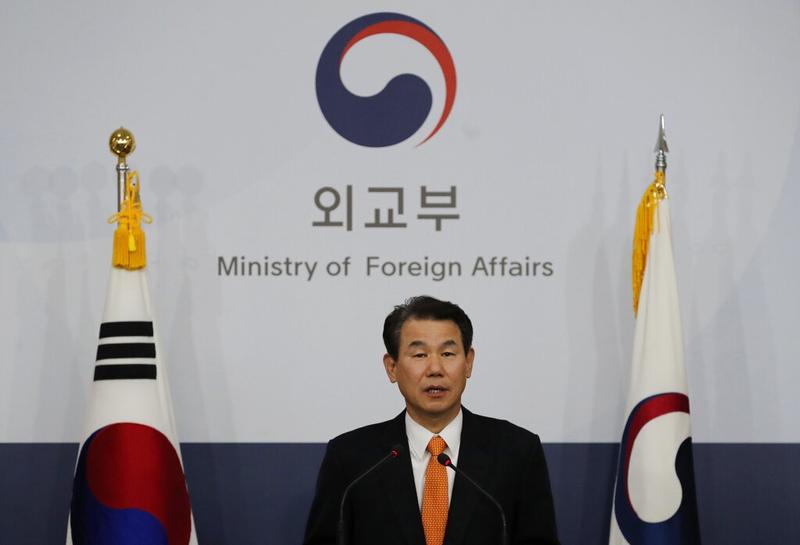 South Korea's chief negotiator Jeong Eun-bo speaks to the media after a meeting with US counterpart James DeHart (not in frame), at the Foreign Ministry in Seoul, South Korea, Nov 19, 2019. (LEE JIN-MAN / AP)

SEOUL - South Korea's chief negotiator left for Washington early Monday to discuss how much of upkeep cost South Korea would share for US Forces Korea (USFK) stationed here, according to Yonhap news agency.

South Korea's chief negotiator noted that whether to strike a deal by the end of this year will depend on how the negotiations go, adding that one more round of negotiations was expected to be held within this year

Jeong Eun-bo, Seoul's chief negotiator for the Special Measures Agreement (SMA), was quoted by Yonhap as saying at the airport that he would make utmost efforts to reach a "mutually acceptable" deal with his US counterpart.

Jeong noted that whether to strike the deal by the end of this year will depend on how the negotiations go, adding that one more round of negotiations was expected to be held within this year.

According to South Korea's foreign ministry, Jeong will visit Washington for two days through Wednesday to hold the fourth round of negotiations for the 11th SMA with his US counterpart James DeHart of the US Department of State.

The SMA is a South Korea-US pact to share defense cost for some 28,500 US troops stationed here.

The third round of talks was held in Seoul about two weeks earlier, but it ended without progress amid the broad difference over the upkeep cost burdened by the South Korean side.

The United States reportedly demanded around US$5 billion from South Korea for next year's upkeep cost for the USFK. South Korea agreed to pay about US$870 million this year.

The 10th SMA, which was reached in March, was set to expire by the end of this year. Since 1991, South Korea has shared various cost for US forces here, including costs for South Korean civilians hired by the USFK, for construction of military facilities and for logistics support.