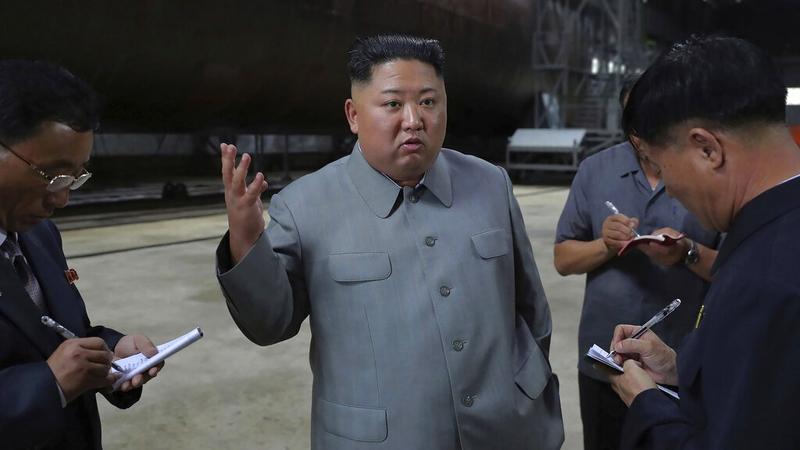 In this undated photo provided on July 23, 2019, by the Democratic People's Republic of Korea's government, DPRK leader Kim Jong-un, center, speaks while inspecting a newly built submarine to be deployed soon, at an unknown location in DPRK. (KOREAN CENTRAL NEWS AGENCY / KOREA NEWS SERVICE VIA AP)

Kim inspected the operational and tactical data and combat weapon systems of the new submarine which was built under "his special attention" and will be operational in the waters off the east coast, KCNA said.

KCNA said the submarine's operational deployment was near.

"The operational capacity of a submarine is an important component in national defense of our country bounded on its east and west by sea," Kim said.

KCNA did not describe the kind of weapons systems the submarine contained or where and when the inspection took place.

The DPRK has a large submarine fleet but only one known experimental submarine capable of carrying a ballistic missile.

Analysts said that based on the apparent size of the new submarine it appears designed to eventually carry missiles.

"We can clearly see that it is a massive submarine – much larger than the existing one that’s been well known since 2014," said Ankit Panda, senior fellow at the US-based Federation of American Scientists.

"What I find significant about the political messaging here is that this is the first time since a February 2018 military parade that he has inspected a military system clearly designed to carry and deliver nuclear weapons."

"I take that as an ominous signal that we should be taking Kim Jong-un’s end-of-year deadline for the implementation of a change in US policy with the utmost seriousness."

A ROK defence ministry spokesman said they were monitoring developments but could not confirm if the submarine was designed to carry missiles.

Kim Dong-yub, a military expert at Kyungnam University's Institute of Far Eastern Studies in Seoul, said Kim likely also wanted to reassure DPRK people of his commitment to national defence at a time when he is focusing more on the economy.

"Announcing his inspection of the new submarine is also to build internal solidarity, to dispel people's concerns about national security, reassure them, and boost military morale," he said. 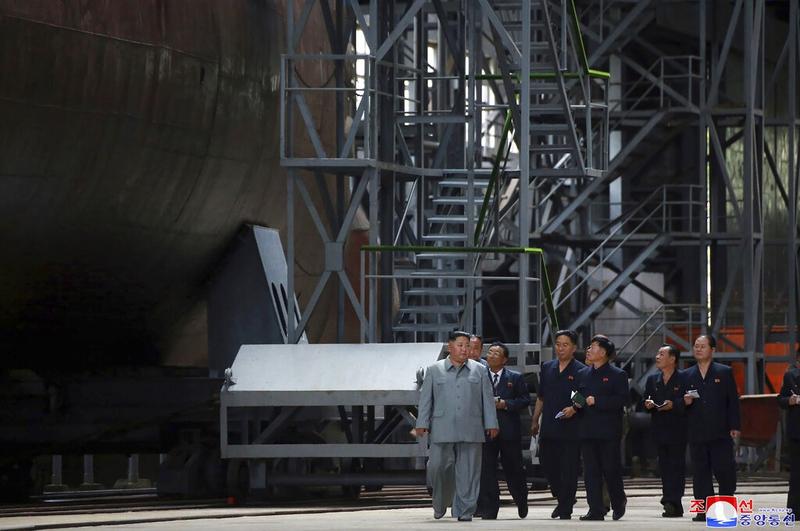 Kim has declared a moratorium on testing ICBM's and nuclear weapons while engaging in denuclearisation talks with the US and the Republic of Korea (ROK).

The DPRK's submarine report comes amid another delay in dialogue between the US and DPRK after Kim and US President Donald Trump agreed at a meeting at the Panmunjom Korean border on June 30 to working-level nuclear talks.

Trump said such talks could come in the following two to three weeks. His national security advisor, John Bolton, arrives in ROK on Tuesday to meet security officials.

A summit between Trump and Kim, in Vietnam in February, broke down after they failed to narrow differences between a US demand for DPRK's denuclearisation and a DPRK demand for sanctions relief.

In April, Kim said he would wait until the end of the year for the US to be more flexible.

The DPRK maintains one of the world’s largest submarine fleets, but many vessels are aging and there are doubts over how many are operational, according to the Washington-based Nuclear Threat Initiative (NTI).

Most of DPRK's fleet consists of small coastal submarines, but in recent years it has made rapid progress inthe SLBM programme, NTI said in a report released late last year.

During the submarine inspection Kim was accompanied by Kim Jong-sik, an official who played a major role in DPRK's missile program.

Another official on the tour was Jang Chang-ha, president of the Academy of the National Defence Science, which the US Treasury has said is in charge of the secretive country’s research and development of its advanced weapons systems,"including missiles and probably nuclear weapons".

H.I. Sutton, a naval analyst who studies submarines, said judging by the initial photos the hull could be based on old Romeo Class submarines, which were originally acquired from China in the 1970s before DPRK began producing them domestically.

The DPRK is believed to have about 20 Romeo submarines in its fleet, the newest of which was built in the mid 1990s, according to NTI.

Sutton told Reuters that the DPRK appeared to have raised the deck on a Romeo-type design, possibly even modifying an existing Romeo to make a submarine larger than previous indigenous designs.

"I'd bet that this is indeed a missile submarine," he said.

"This, to my eye, is the submarine that the US intelligence community has been calling the Sinpo-C, a successor to North Korea’s only known ballistic missile submarine," Panda said.