Pork shortages set to ease by next year 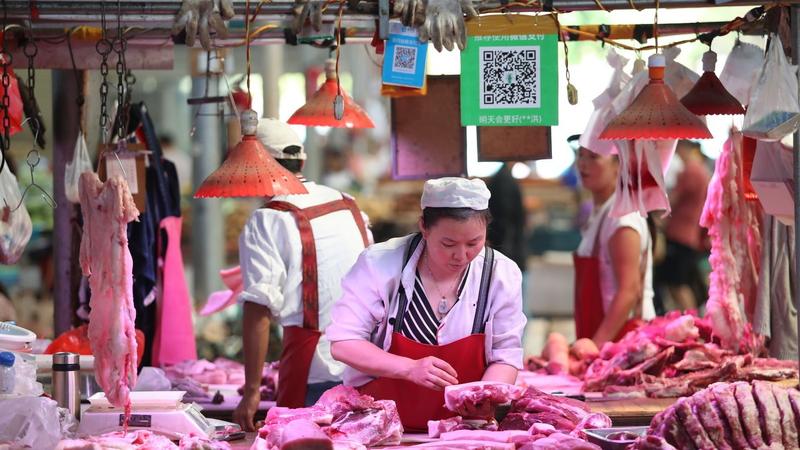 Rising domestic production, growing imports and new measures to prevent African swine fever in pig farms will help China overcome pork shortages during the second half of next year, the Ministry of Commerce said on Monday.

The Department of Market Operation and Consumption Promotion under the ministry said China will continue to release frozen pork reserves into the market to curb rising pork prices and ensure that there are adequate supplies during the New Year's Day holiday on Jan 1, and the seven-day Spring Festival holiday in late January.

In addition to encouraging companies to expand their import channels via platforms such as the China International Import Expo, the ministry will work with other government branches to prioritize to imported pork and chilled meat in customs clearance inspections and release at various ports across China.

The ministry said China's meat imports are expected to exceed 6 million metric tons this year, and pork and its by-products will surpass 3 million tons

The ministry said China's meat imports are expected to exceed 6 million metric tons this year, and pork and its by-products will surpass 3 million tons.

Attracted by the country's big population base and spending power, over 1,000 global pork suppliers have registered as importers with the Ministry of Commerce to date this year, about 30 percent higher than in 2018.

China imported 1.58 million tons of pork from global markets in the first 10 months of 2019, mainly from the European Union, South America and the United States, data from the Ministry of Commerce show.

The African swine fever has resulted in a shortage of more than 10 million tons of pork, or at least 20 percent of China's total pork output this year. China produced a total of 31.81 million tons of pork in the first three quarters this year, down 17.2 percent on a yearly basis, according to the ministry.

The surging pork prices have also boosted the country's Consumer Price Index to 4.5 percent in November, the year's highest.

Li Guoxiang, a researcher at the Rural Development Institute of the Beijing-based Chinese Academy of Social Sciences, said pork shipments ordered by domestic companies after June had arrived at Chinese ports in November and December, and will help to tackle price rises during the holiday seasons in January.

Moreover, the phase one trade deal reached by the Chinese and US governments last Friday will create new options for China to purchase more US pork and other agricultural commodities to meet its domestic requirements, he said.

Under such circumstances, Li believes that pork prices will not cause any further inflation in the first half of next year if the government continues to release pork reserves, enhances matchmaking between sales and production in global markets, and discloses market information in a timely manner.

Earlier this month, the Ministry of Agriculture and Rural Affairs urged local authorities to provide financial support as soon as possible, guide pig farmers to restore production, and honor subsidies offered to pig farmers who have slaughtered pigs to prevent and control the swine fever.

Under the government plan, China will also build another 120 high-quality standardized pig farms within three years, to improve standardized production of pork.