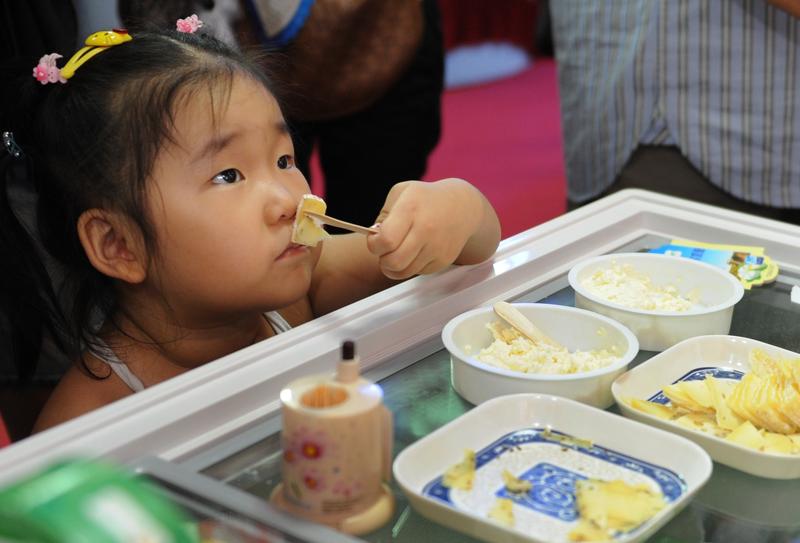 This undated photo shows a child has a taste of cheese products produced by Yili Group at an exhibition in Urumqi, capital of the Xinjiang Uygur autonomous region. (PHOTO / XINHUA)

Cheese is set to become a new growth point of the dairy sector in China, prompted by the increasing popularity of Western food and some innovative combinations such as cheese hotpot and milk tea with cheese on top.

In major first-tier cities, the dairy market is undergoing some structural changes as sales of high-end pure milk continue to expand, and sales of yogurt and cheese surge, industry experts said.

Currently, annual per capita consumption of cheese in China is only 0.1 kilogram, far below 2.4 kg in Japan, 2.8 kg in South Korea, 15 kg in the United States and 18.6 kg in Europe where France, Germany and the Netherlands take the top three spots, according to the China Dairy Industry Association.

"Dairy consumption in smaller cities and rural areas in China is far from the level it could be. Consumption of milk and other dairy products like cheese and butter will keep growing and help to boost total dairy consumption," said Zhang Liebing, an associate professor at China Agricultural University.

The annual per capita consumption of dairy products in China has reached 36 kg now, much higher than the 6 kg recorded two decades ago, but the volume is still less than half that of Asia and less than a third of the world average, the dairy association said. Meanwhile, to produce 1 kg of cheese, it requires about 10 kg of milk. The cost of milk in China is about double that in Europe and the US, and the cost of producing cheese is even higher, making the cheese products available in supermarkets in China relatively expensive.

"The number of Chinese people who like eating cheese will rise, due to the growth in popularity of Western food like pizza, spaghetti, cheesecake and sandwiches in China. The volume of imported cheese has been growing significantly, showing an increasing demand and appetite from consumers," said Song Kungang, honorary chairman of the dairy association.

"Domestic producers should pay more attention to the development of cheese products. Cheese wrapped in small packages and snack foods like cheese sticks are favored by consumers and seen as a future trend," Song said.

"In fact, many Chinese foodstuff firms are starting to use cheese as an ingredient, such as vegetable buns with cheese, seafood cheese fried rice, and deep-fried purple potato balls in cheese. Besides, China has rich resources for special dairy products, and domestic producers can develop cheese based on goat, buffalo and yak milk," he said.

"We would also like to call for a faster revision of the comprehensive cheese production standards in China and the issuance of licensing for cutting imported cheese. This would help to enable imports of more high-quality cheese, and build platforms for the innovation of more cheese products by domestic companies," he said.

In addition, cheese has a high nutritional value and the protein from cheese can be fully digested, meaning that lactose-intolerant Chinese consumers don't need to worry about such problems, Song added.

Major domestic dairy companies have witnessed a faster rate of growth in sales of cheese products than the overall dairy market and that of liquid milk.

By 2023, sales of cheese in China, including processed and unprocessed cheese, are expected to reach US$1.44 billion, which will be 44.7 percent higher than this year's expected sales level, market researcher Euromonitor International said.

In terms of retail value, the US is the biggest cheese market, followed by France and Germany. Last year, sales of cheese in the US reached US$23.41 billion, much higher than the US$10.37 billion recorded in France, Euromonitor International found.

According to the Chinese Milk Quotient report released last year, currently the dairy consumption of nearly 80 percent of Chinese consumers does not meet national dietary recommendations－Chinese adults are advised to consume 300 grams of milk or the same quantity of dairy products every day, according to the Chinese Dietary Guidelines, but most people are not aware of the guidelines and do not consume enough. Besides, more than 70 percent of Chinese consumers only drink milk and yogurt, proteins from which are fairly simple in structure.

On the other hand, industry experts said China lacks advanced technologies to develop and produce high-quality cheese as well as more varieties.

"The production of cheese is the most difficult and complicated dairy process, and it is hard to make products of consistent quality. Major domestic dairy producers need to increase their investments in R&D and cooperate with more scientific research institutes in the development of cheese," said Liu Zhenmin, director of the Bright Dairy Research Institute.