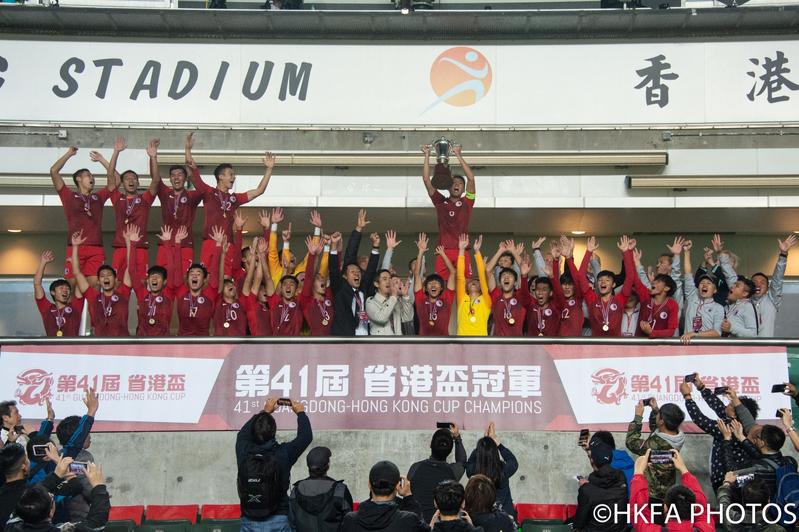 The HKFA team won the 41st edition of the Guangdong-Hong Kong Cup with an aggregate score of 5-2. (PHOTO COURTESY OF HKFA)

The HKFA team came out victorious with an aggregate score of 5-2 when the Guangdong-Hong Kong Cup was decided over two legs on 6 and 9 Jan, making it the second consecutive win under the guidance of coach Kenneth Kwok Kar-lok. The game was seen as preparation for the upcoming AFC U23 Championship qualifiers, with Kwok giving young players the opportunity to gain experience and prove themselves at a highly competitive level. While some might question the significance of the tournament, it is still held in high regard by football fans, particularly in southern China. This was underlined by the motivation and passion displayed by both sides throughout the games.

The selection of the Guangdong FA edged out Hong Kong on 6 Jan in Guangzhou, with a deserved 2-1 win. This result was particularly facilitated by Chinese Super League veteran Lu Lin, who scored the first goal from a penalty and assisted the second with a corner kick. However, Jordan Lam pulled one back for the guests with a brilliant strike that lobbed Guangdong goalkeeper Hou Yu.

While Kwok still followed a rather defensive strategy in the first encounter, he switched to high-pressing “full attack” mode for the return leg in Hong Kong on 9 Jan, clearly signaling that they would go for a win. This strategy paid off soon enough when Matthew Orr put the ball into the net from close range just 22 minutes into the game. Soon after the break, R&F (HK) defender Leung Nok-hang added another one by head. In the 56th minute, referee Tam Ping-wun decided on a penalty for the home side, with Yuen Chun-sing converting from the spot. Yue Tsz-nam, who recently made his A-team debut under Gary White, wrapped up the scoring of the night with a wonder-strike in the 71st minute. In the end, the young HKFA squad celebrated a 4-0 win with more than 4,000 spectators present at Hong Kong Stadium. This also marked the victory with the highest margin for Hong Kong in the 41-year history of the tournament. 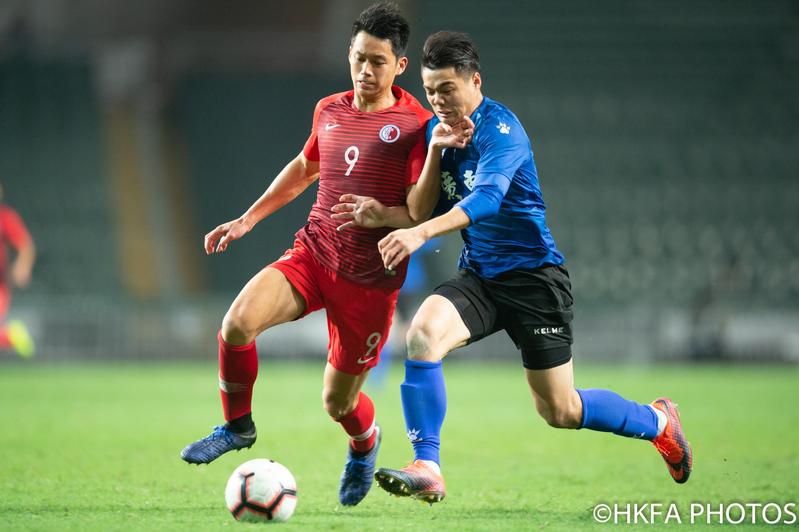 Given the recent achievement of the team under Kenneth Kwok Kar-lok, he has been increasingly tipped as one of the main contenders for the head coach position of the HKFA senior representative team, who have been without manager since the beginning of December 2018, when Gary White left for Japan to take over J2 club Tokyo Verdy.

For now, the focus will return to the Hong Kong Premier League, where the upcoming ninth round will mark “half time” of the 2018/19 season.

R&F are currently second in the table, just one point behind Eastern, and if things go their way this round they might be able to claim the top spot once again. Two of their players, Leung Nok-hang and Yuen Chun-sing, scored in the Guangdong-Hong Kong Cup, which underlines the club’s success in securing some of the best local talents. Nonetheless, coach Yeung Ching-kwong and his men just recently suffered a painful loss, when they were eliminated from the Senior Shield by Tai Po on 25 Dec. This means that R&F need to find another path to silverware this season. Meanwhile, Dreams have not made any changes to their squad and they will be in a tough situation to take away any points from Guangzhou. 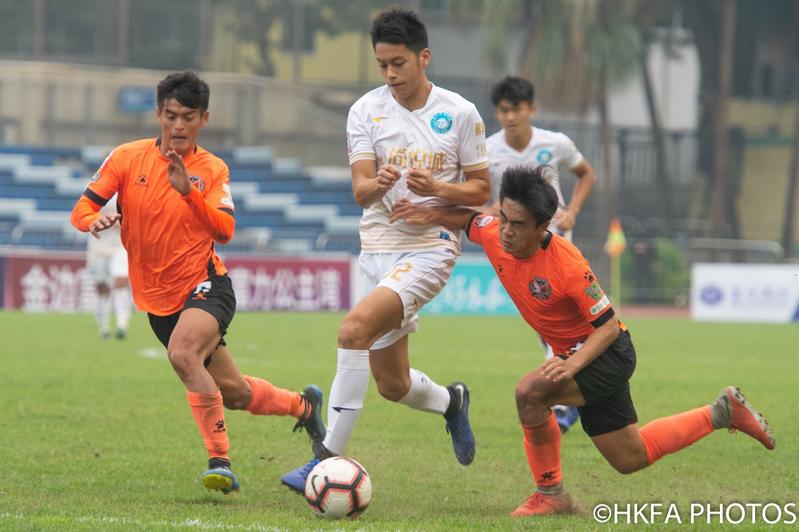 R&F could return to the top of the table if things go their way this weekend. (PHOTO COURTESY OF HKFA)

In what is arguably the “match of the week”, Southern host Kitchee on 12 Jan at the freshly reopened Aberdeen Sports Ground. Southern had a perfect start into the season, however, their run has lost momentum in recent weeks. For now, they are fourth on equal points with Kitchee. In the past, the Aberdeeners have proven themselves as fierce opponents for the Bluewaves and it would not be a surprise if they could cause an upset or at least hold them to a draw. Meanwhile, Kitchee will hope to find their way back to dominance as soon as possible. New signing Matt Smith, who replaces Kim Bongjin, is expected to strengthen the somewhat struggling defense.

Tai Po have had a perfect end to 2018 when they qualified for the final of the Senior Shield on 26 Jan. For now, they have a doable task in the league, when hosting bottom-of-the-table Hoi King this Sunday. The Greens have just signed Pegasus playmaker Joao Emir, though it is yet to see how he will link up with captain Wong Wai and the rest of the team. For Hoi King it will be a difficult task to survive. In their latest outing, they lost 0-6 to Eastern on 2 Jan. Ze Victor and Hui Ka-lok join the Kingsmen on loan from Lee Man. They also signed Korean midfielder Kim Min-ki.

Pegasus are still finding their role in the league this year, and the match against Yuen Long might well decide if they should be considered an upper half or lower half team. The Flying Horsemen just lost 0-2 to Lee Man in the Sapling Cup group stage, albeit without fielding the strongest team. Yuen Long might be further motivated by sparks of glory, as their coach Kenneth Kwok returns to the club from a successful Guangdong-Hong Kong Cup.

The last match of the round will be played on Tuesday night at Hong Kong Stadium, where Eastern aim to beat Lee Man to keep their first spot in the table. The Blues have struggled ever since their Spanish defender Jose Angel had been injured, though they just announced the signing of Portuguese centre-back Lima Pereira. The 24-year-old has previously played in Portugal’s second tier. Meanwhile, the club has loaned out Tsang Chi-hau and Cheung Kin-fung to Pegasus and Yuen Long respectively.