Reviving a dyeing tradition in Yunnan 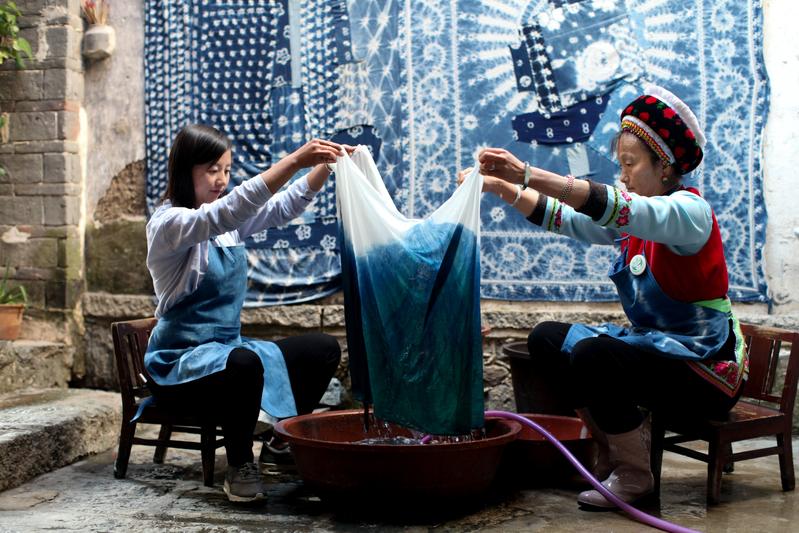 Zhang Hanmin and a local woman are tie-dyeing a piece of cloth with a sky blue color extracted from plants. (PHOTO / CHINA DAILY)

In a century-old courtyard, several tourists are learning how to tie-dye a piece of white cloth.

"Tie-dyeing is more than craftsmanship. It's a lifestyle that we want to pass on to others. It's about the harmony between the Bai people and nature."

As tourism takes hold in the Dali Bai autonomous prefecture, in Yunnan province, more visitors are seeking such experiences.

The workshop is conducted by the Lanxu Eco-Culture Development Center in Zhoucheng village, inhabited by the Bai ethnic group. It aims to promote the culture of the Bai people and showcase their sustainable lifestyles.

The tie-dyes of the Bai ethnic group use hand-weaved white cloth and colors extracted from plants. People use needle and thread to make different folds in a cloth and put it into a dye vat several times until the color becomes darker. Common patterns are geometric shapes and flowers. It was listed as a national intangible cultural heritage in 2006.

"Tie-dyeing is more than craftsmanship. It's a lifestyle that we want to pass on to others. It's about the harmony between the Bai people and nature," says Zhang Hanmin, 35, who founded the center in 2014.

Zhang, who used to work in a non-governmental organization in Beijing, says: "I like doing tie-dye. It's a dialogue with my inner-self and time stands still."

Zhang Hanmin and her husband Zhang Bin are both of the Bai ethnic group from Zhoucheng village who worked in Beijing after graduating from university. 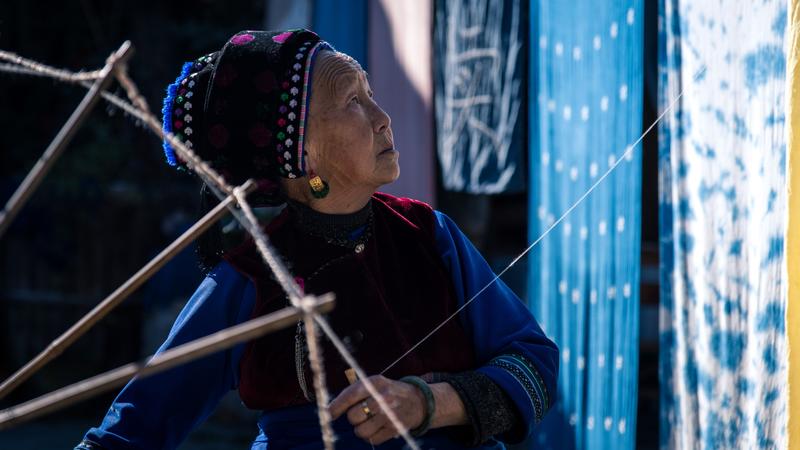 She returned to her village to revive the ancient tie-dye technique. Later, Zhang Bin also returned to support her work at the center. The couple now live in the village with their 6-year-old son.

ALSO READ: Running for the environment

At first, she learned how to tie-dye using plants and draw traditional tie-dye patterns from the local elders.

When a 90-year-old craftsman taught her how to extract a blue color from a plant, he worked for more than an hour without drinking water or resting.

"I'm touched by their attitude and love for nature, and it encourages me to persist when I'm faced with difficulties," she says. 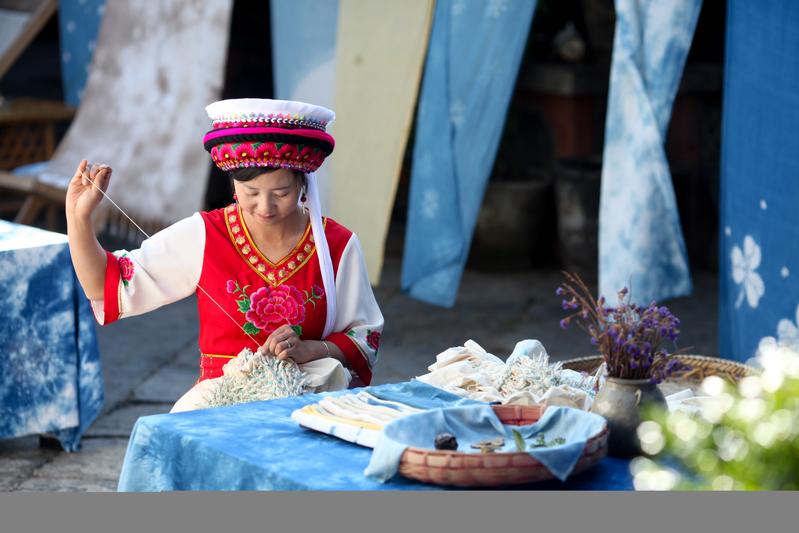 Zhang, 35, comes back to her hometown to revive the ancient tie-dye technique. (PHOTO / CHINA DAILY)

The center's reputation is growing among locals and tourists thanks to word of mouth, and the local government also supports them by inviting them to join events in other cities.

Zhang Hanmin remembers when she was a child, the local women would dry their half-made tie-dyes on the stone road, and how she would help her mother to tie-dye to get pocket money.

"At that time, my mother tie-dyed with her friends around the stove after supper, and I played with other children. These memories are what drive me to revive tie-dye."

Zhang Hanmin has also started a class to promote Bai culture among local children. As part of the class, she takes them to the mountains to experience the natural beauty of their hometown.

"It's like sowing a seed－who knows which of them will become an inheritor or guardian of our culture in the future.

"Just like me. How was I to know that my childhood memories would influence me so much."

Zhang Hanmin says when she returned to her hometown for Spring Festival six years ago, she found that few young Bai people were interested in their traditions. "They preferred machine-made clothes, which were cheaper and came with more patterns."

Now, she finds more locals are returning to Zhoucheng to build a career in tie-dyeing.

She now teaches the technique to others in Dali, and believes that sharing and communication will boost the industry.

"I want to be an influencer rather than a competitor. It's important that tie-dye shines on the world stage. When we all work together to make the market bigger we will make the industry better," she says. 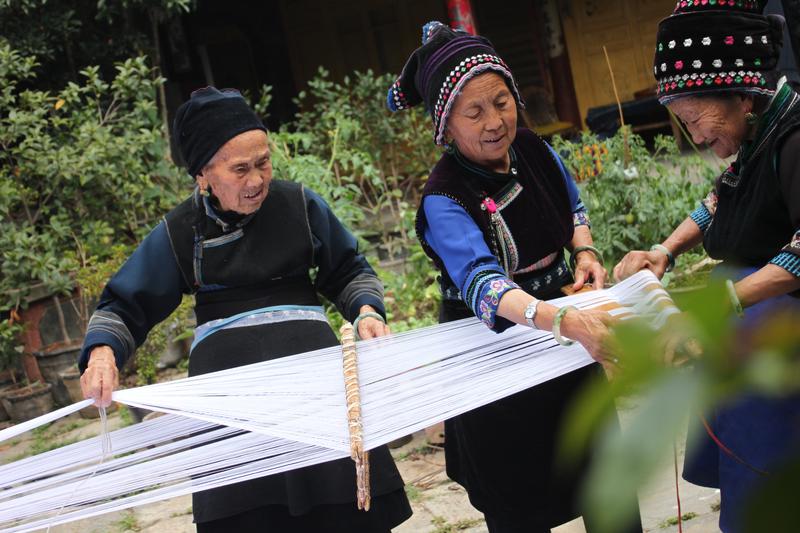 "I'm looking into ways of promoting the Bai culture in a sustainable way. I want our customers to enjoy the process of tie-dyeing so they like it."

Zhang Hanmin combines fashion elements with traditional tie-dye to make products such as scarves and handkerchiefs.

The center currently has 21 staff members, many of whom are local Bai youth.

READ MORE: To Russia, for love

"I hope that young people of Bai will take up the tradition of doing tiedye and enjoy it.

"When young people find that there are such work opportunities that bring a sense of identity, they will be happy to return to make a contribution to their hometown," she says.