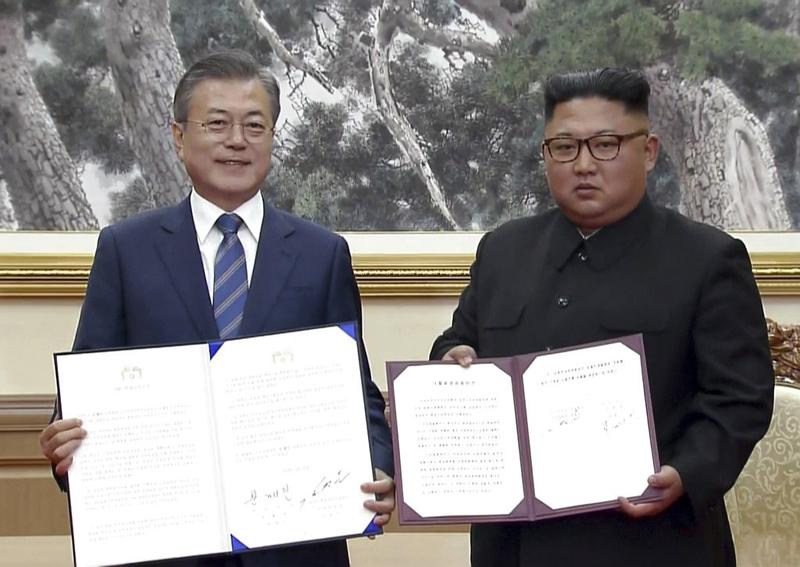 SEOUL - Republic of Korea (ROK) President Moon Jae-in and top leader of the Democratic People's Republic of Korea (DPRK) Kim Jong-un on Wednesday signed an agreement after their third summit meeting in the DPRK's capital Pyongyang, broadcast live at the Seoul press center.

Shortly afterwards, ROK and DPRK defense chiefs signed an agreement on military affairs Wednesday at the Baekhwawon State Guest House in Pyongyang, with the leaders of the two Koreas looking on.

Moon said at a televised press conference in Pyongyang that Kim had agreed with him on ways to denuclearize the Korean Peninsula for the first time.

He said Kim had agreed to allow internatonal inspectors to observe a "permanent dismantlement" of its key missile facilities, and would take additional steps such as closing its main Yongbyon nuclear complex if the United States took reciprocal measures.

DPRK and ROK agreed that the Korean Peninsula should turn into a "land of peace without nuclear weapons and nuclear threats," Moon said following the conclusion of his summit talks with Kim.

Speaking at a joint press conference with Moon, Kim said he will visit the ROK's capital Seoul "in the near future."

Kim and Moon said in a statement Wednesday that the countries planned to jointly bid for the 2032 Summer Olympics.

At a major summit, the two leaders gave no details of which cities might host certain events at the games, or how advanced the plans were. 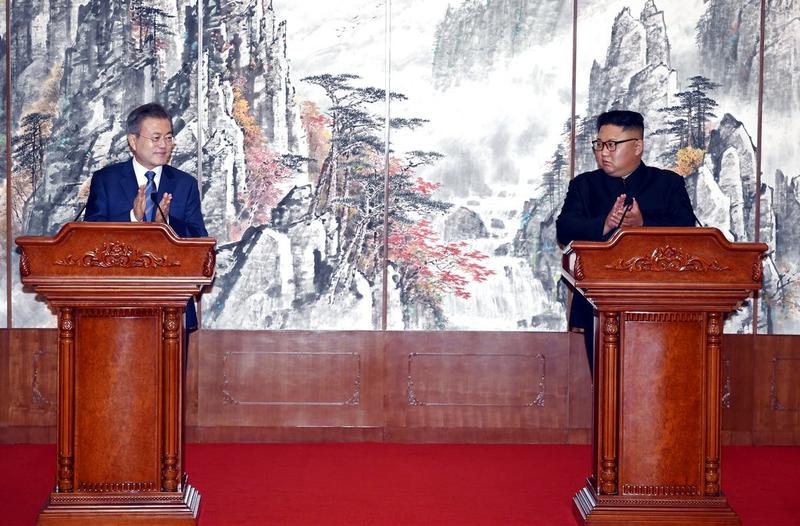 The International Olympic Committee traditionally does not announce host cities until seven years ahead of the games. That would give the Koreas until 2025 to put together a joint bid.

The joint statement Wednesday also said the Koreas would look to cooperate in major sports events such as the 2020 Games, also without elaborating.

The statement caps off the third summit between Kim and Moon, who is under increasing pressure from Washington to find a path forward in its efforts to get Kim to completely — and unilaterally — abandon his nuclear arsenal.

US President Donald Trump welcomed the developments "very exciting". "Kim Jong-un has agreed to allow nuclear inspections, subject to final negotiations, and to permanently dismantle a test site and launch pad in the presence of international experts," Trump said on Twitter, referring to agreements the DPRK leader made in talks with ROK's Moon.

READ MORE: Moon says to have frank talks with Kim to build trust

According a joint statement signed by the countries' defense chiefs, the two Koreas agreed to establish buffer zones along their land and sea borders to reduce military tensions and prevent accidental clashes. They also agreed to withdraw 11 guard posts from the Demilitarized Zone by December and to establish a no-fly zone above the military demarcation line that bisects the two Koreas that will apply to planes, helicopters and drones.

With the main business of the day over, DPRK was expected to hold a huge mass games spectacle in the evening, with Moon as the special guest.
DPRK had put the iconic games, which feature tens of thousands of performers dancing and flipping placards in unison to create giant mosaics and slogans, on a back burner for the past several years, but revived them for this month's celebrations of its 70th founding anniversary. In a performance for the anniversary, a giant photo of Moon and Kim shaking hands at their first summit in April was projected onto one side of the stands in Pyongyang's 150,000-seat May Day Stadium.
Kim has gone all out to make Moon's visit a memorable one.

Kim and Moon kicked off their third meeting of the year on Tuesday in Pyongyang, where cheering crowds greeted the leaders as they travelled through the capital.

Afterwards, Kim said his "historic" summit with US President Donald Trump in June had improved regional stability and raised hopes for further progress.

Moon and Kim resumed their talks on Wednesday at around 10 am (0100 GMT), this time without any other attendees.

Kim pledged to work toward the "complete denuclearization of the Korean peninsula" during his first meeting with Moon in the Demilitarized Zone that separates the two Koreas in April, and at his summit with Trump in June.

But discussions over how to implement the vague commitments have since faltered.