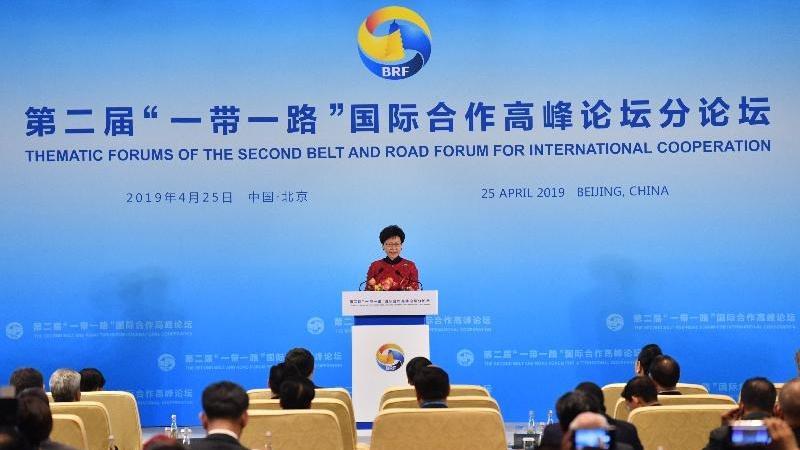 HONG KONG - Hong Kong seeks to be bigger part of the nation-led Belt and Road Initiative based on “what the country needs” and “what Hong Kong excels at”, city Chief Executive Carrie Lam Cheng Yuet-ngor told the second Belt and Road Forum for International Cooperation in Beijing on Thursday.

As a special administrative region of China blessed with ‘one country, two systems’ and well-established international links, Hong Kong aspires to play an active role in this initiative

“Belt and Road is a vision that is driving changes and spurring development across the world. As a special administrative region of China blessed with ‘one country, two systems’ and well-established international links, Hong Kong aspires to play an active role in this initiative,” Lam said.

The Hong Kong leader led a 68-member delegation of top aides to the forum, which attracted heads of state and government from 37 countries and regions, plus UN Secretary-General Antonio Guterres and International Monetary Fund Managing Director Christine Lagarde.

The three-day event has about 5,000 participants from more than 150 countries and 90 international organizations. With the theme “Belt and Road Cooperation: Shaping a Brighter Shared Future”, this year’s forum features 12 subforums, double the number at the first BRI forum, held in 2017.

Lam said the city’s “single most relevant advantage that could best meet the country’s needs” lies in its indisputable status as a world-renowned financial center. Such impeccable strength fits in well with the insatiable appetite for infrastructure investment from the investment-hungry countries and regions involved in the BRI.

Introduced in 2013 and billed as “the project of the century” by President Xi Jinping, the BRI aims to build an interconnected network of expressways, as well as rail and logistics lines linking land and sea ports, special economic zones, industrial corridors and transportation hubs from the coasts of China to Europe.

The massive trade and infrastructure project has an enormous unfilled funding demand. In Asia alone, such demand is estimated by Asian Development Bank to be US$1.7 trillion each year in developing countries between 2016 and 2030.

This is where Hong Kong could help, Lam said. Hong Kong — known for its deep capital market,  its status as one of the largest bond markets in the region, and the biggest offshore renminbi center in the world — stands as a one-stop destination of choice to serve as a premier financial and risk management center for the BRI’s big-ticket projects, she said.

While infrastructure investment lays the foundation for achieving inclusive and sustainable growth, and unleashing the huge potentials from the Belt and Road drive, Lam believed Hong Kong has more to offer.

Hailed as a city having the best of the two worlds, Hong Kong has long been strategically located as a two-way gateway connecting the Chinese mainland and Belt and Road countries. The city not only has what it takes to play a pivotal role in strengthening economic cooperation along the Belt and Road route, but also offers a platform for cultural exchanges between East and West, as well as playing a critical part in enhancing people-to-people bonds, Lam said.

As a well-developed city with rich experience in city management, Hong Kong is also geared up to share its knowledge and expertise with the Belt and Road counterparts in a variety of fields, such as airport management, railway operation, emergency services, and green and sustainable development, Lam said, adding that she has made capacity-building one of Hong Kong's contributions to the Belt and Road's people-to-people connectivity.

This reinforces the theme of regional collaboration and joint development underscored in the Guangdong-Hong Kong-Macao Greater Bay Area development plan. As an ideal example of how economies with different characteristics can work together to achieve a win-win outcome, the Bay Area mega plan is set to offer unswerving support for the country’s vision of reviving its ancient trade routes, Lam said.

ALSO READ: Belt and Road has the world in awe

Echoing Lam’s remarks, Edward Yau Tang-wah, secretary for commerce and economic development, said Hong Kong is well-prepared to work with other economies in the region to make a palpable difference in the joint pursuit of shared win-win economic development.

“What Hong Kong can offer is not just from the city of Hong Kong. We can go beyond being a financial center, but also leverage on the diversified network we have, and make good use of the strength of professional services and embarking further onto I&T development,” Yau said.