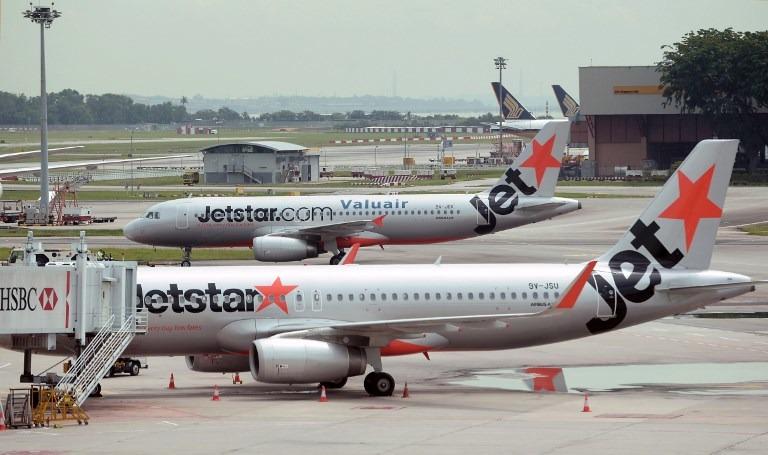 Aircraft of Australian low-cost carrier Jetstar Airways are seen at Changi International Airport in Singapore on May 8, 2014. (ROSLAN RAHMAN / AFP)

SYDNEY - An "irate" passenger who reportedly missed his scheduled flight was arrested at Melbourne Airport on Thursday after attempting to break into a Jetstar Airways plane.

The incident was captured on video by a traveler inside the terminal. The video footage showed the man bashing and pulling frantically on the plane's door, trying to get inside.

This man was trying to get up the stairs, he was physically fighting with the staff, punching and scratching them

According to local media, the man was hours late for his original flight and became aggressive towards Jetstar staff.

They alleged the infuriated man then pushed a crew member and ran through the terminal gate onto the tarmac where he was able to access the stairs leading to the plane.

"We were sitting waiting to get on the flight and people went 'oh my god, what is going on?'" a witness said.

"Someone was running on the tarmac!"

"This man was trying to get up the stairs, he was physically fighting with the staff, punching and scratching them."

The man was eventually restrained by baggage handlers and arrested by the police.

It was believed at least two Jetstar employees suffered injuries.

A spokesperson for the airline said baggage handlers went "above and beyond."

"We praise our crew for safely handling this incident and restraining the passenger until police arrived."

The man has been banned from any future Jetstar or Qantas flights and is set to face charges.