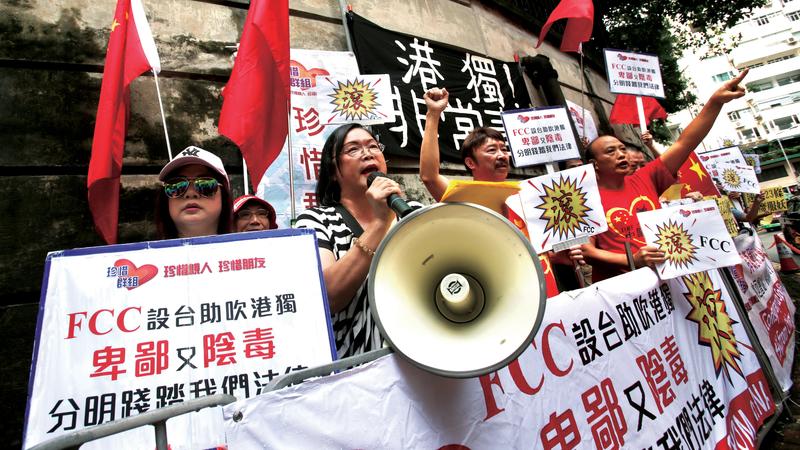 Hong Kong citizens voice their denouncement of the Foreign Correspondents' Club outside its office in Central for hosting a separatist talk by Andy Chan Ho-tin, an open advocate of Hong Kong independence. (PARKER ZHENG / CHINA DAILY)

HONG KONG - Pro-independence activist Andy Chan Ho-tin, convener of the Hong Kong National Party, and the Hong Kong Foreign Correspondents’ Club may have committed “seditious intention” and other offenses under the Crimes Ordinance after the club hosted Chan for a luncheon talk in which he called for the special administrative region to secede from China, legal experts said on Tuesday.

As it not only provided a venue for Chan to push Hong Kong independence, but also broadcast Chan’s speech live on social media, the FCC in fact helped Chan spread the notion to incite the public’s hatred against the central government and the SAR government, Song said

Chan, who called the People’s Republic of China a “colonial master” and openly advocated for Hong Kong’s independence from the country, violated the Basic Law and the national Constitution by his actions, said Song Sio-chong, a professor at the Research Center of Hong Kong and Macao Basic Law, Shenzhen University.

As it not only provided a venue for Chan to push Hong Kong independence, but also broadcast Chan’s speech live on social media, the FCC in fact helped Chan spread the notion to incite the public’s hatred against the central government and the SAR government, Song said. Therefore, the club should carry the same criminal responsibilities under the city’s legislation, he said.

According to Section 3(1) of the Crimes Ordinance, any person intended to depose “Her Majesty’s dominions” and manifests such intention by an overt act, shall be guilty and is liable to imprisonment for life.

The reference to “Her Majesty” in the ordinance, which was enacted before Hong Kong’s return to the motherland, shall be construed as the central government or other competent authorities of the country, when the content involves the relationship between the central government and the HKSAR, according to Annex 3 of Instrument 16 of the Basic Law.

As for seditious intention, according to Section 9 and 10 of the Crimes Ordinance, it refers to intention such as to bring into hatred or to excite disaffection against the central government’s dominions or against the SAR government.

Lawrence Ma Yan-kwok, a barrister and chairman of the Hong Kong Legal Exchange Foundation, echoed Song’s views. He said leaders of the FCC, who made the decision to invite Chan to give a speech, could be prosecuted for seditious intention as well.

Ma noted that the FCC rented its building in Central from the SAR government, and the lease between the two parties stipulates that the venue can’t be used for any illegal activities. Therefore the SAR government should end the tenancy with FCC immediately, Ma said.

In his speech, Chan called for support from the international community on Hong Kong’s independence, the way they supported the independence of Tibet and Xinjiang autonomous regions. This undermined China’s national sovereignty, security and territorial integrity, which violates the Basic Law, Ma said.

Agreeing with Ma, barrister Ronny Tong Ka-wah said Chan’s call for international intervention, such as his call for the United States to impose political sanctions against the SAR government, demonstrated the harm of Chan’s party to Hong Kong society.

Tong said he thought that what Chan said at the FCC could be used as evidence for the Security Bureau to ban HKNP’s operation on national security grounds. Noting that Chan has been given until Sept 4 to explain why such a ban is unnecessary, Tong said his speech on Tuesday made it unlikely he’ll avoid it.