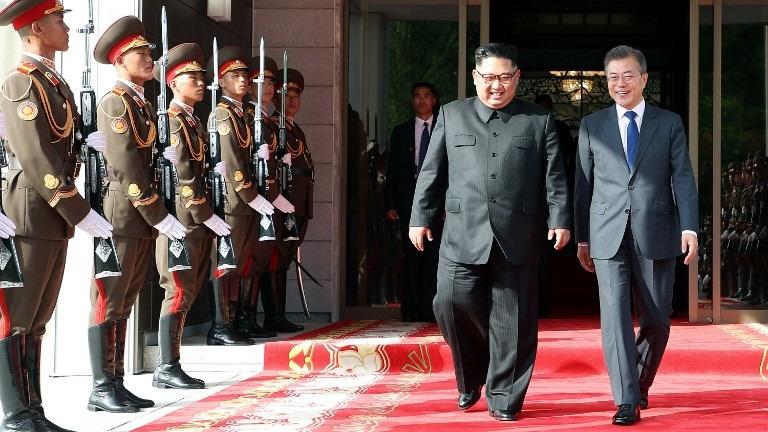 This handout taken on May 26, 2018 and released by the Republic of Korea (ROK)'s presidential Blue House on May 27, 2018 shows ROK's President Moon Jae-in (right) and the Democratic People's Republic of Korea (DPRK)'s leader Kim Jong-un (second right) walking together after the summit at the north side of the truce village of Panmunjom in the Demilitarized Zone. (THE BLUE HOUSE / AFP)

SEOUL – The Republic of Korea (ROK)’s President Moon Jae-in and top leader of the Democratic People's Republic of Korea (DPRK) Kim Jong-un are expected to focus on issues of denuclearizing the Korean Peninsula and defusing inter-Korean military tensions during their upcoming summit, a special security advisor for Moon said Thursday.

"President Moon sees the denuclearized Korean Peninsula as the biggest agenda item (during his upcoming summit with the DPRK leader)," Moon Chung-in, special advisor to Moon for unification, foreign affairs and national security, told a press conference with foreign correspondents in Seoul.

"The first agenda item would be the denuclearization," said the professor emeritus at Yonsei University in Seoul who emphasized he was speaking not for the president, but as an expert.

Moon Jae-in and Kim agreed to hold their third summit in the DPRK's capital city of Pyongyang for three days from Sept 18. They agreed to the peninsula's complete denuclearization after their first summit in April at the border village of Panmunjom.

The special advisor expected President Moon to play a mediator role to narrow differences and expedite dialogues between the DPRK and the United States, saying the ROK leader believed that improved inter-Korean ties would fuel the DPRK-US talks.

It would eventually lead to helping resolve the peninsula's denuclearization issue, the special advisor noted.

During his phone talks with President Moon, US President Donald Trump asked the ROK leader to become a chief negotiator between Pyongyang and Washington.

Moon's special envoys met last week with the DPRK leader in Pyongyang, setting the date for the third Moon-Kim summit. After the meeting with Kim, the special emissaries delivered the DPRK leader's message to the US side.

The special advisor said President Moon is expected to convey President Trump's message to Kim, the DPRK leader, at the upcoming inter-Korean summit, noting that possibility is very high for the denuclearization to succeed this time through dialogues.

Kim repeated his unwavering willingness toward the denuclearization if conditions are met such as the declaration to end the 1950-53 Korean War, which has left the peninsula divided since the war ended with armistice, according to the special advisor.

The expert said there was no fixed way of denuclearization, expressing his hope that both the DPRK and the United States would take bold actions to achieve the common goal of the denuclearized peninsula.

During his meeting with Moon's special emissaries, Kim said he was willing to complete the denuclearization within the tenure of President Trump. The special advisor called it a daring comment and an expression of the DPRK's will to dismantle its nuclear program.

The special advisor said the US side should respond to it by significantly easing sanctions on Pyongyang.

Another issue on the key agenda during the Moon-Kim summit would be ways to implement the Panmunjom Declaration, which the leaders of the two Koreas signed following their first summit, the expert said.

In addition to the denuclearization, the Panmunjom Declaration included eased military tensions between the two Koreas, trust-building and improved relations.

The special advisor said President Moon had a great interest in altering the demilitarized zone (DMZ), which divides the two Koreas, into a peace zone and transforming the inter-Korean sea boundary into a maritime peace zone.

It would help denuclearize the peninsula as eliminating possible military skirmishes in border areas reduces a threat of the DPRK's nuclear program from President Moon's perspective, the expert said.

Military officials from the two sides held working-level talks on military affairs in Panmunjom earlier in the day. They reportedly discussed the withdrawal of a part of guard posts inside the DMZ, ways to disarm the Joint Security Area (JSA) inside the Panmunjom and the joint excavation of the remains of fallen soldiers during the Korean War.

Also on Thursday,  the ROK presidential Blue House said the ROK and the DPRK will hold preparatory talks at the border village of Panmunjom on Friday for the upcoming inter-Korean summit.

A Blue House official, who declined to be identified, told reporters that working-level officials from the two sides are expected to discuss protocol, security and media coverage during the upcoming summit.

Meanwhile, the meeting of the National Security Council (NSC) of the Blue House was chaired by Chung Eui-yong, top national security advisor for President Moon, earlier in the day.