CE: 'One country, two systems' must be upheld 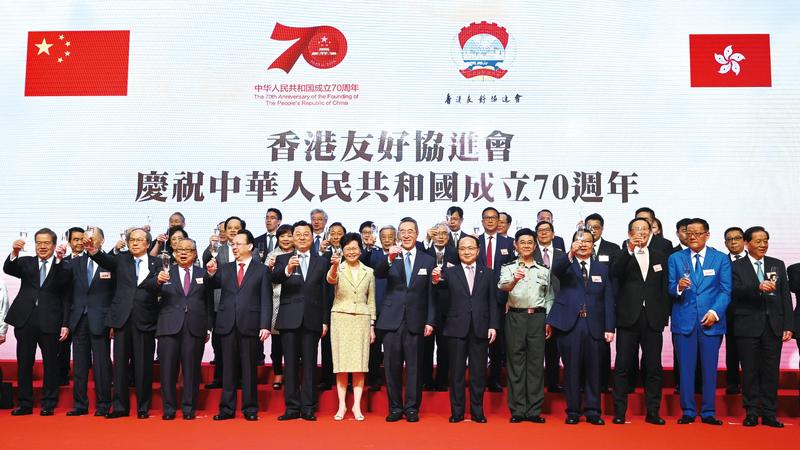 Hong Kong Chief Executive Carrie Lam Cheng Yuet-ngor and other dignitaries attend a reception held by Friends of Hong Kong Association to celebrate the 70th anniversary of the founding of the People’s Republic of China on Wednesday. (PHOTO / CHINA DAILY)

Hong Kong Chief Executive Carrie Lam Cheng Yuet-ngor on Wednesday reaffirmed the importance of the “one country, two systems” principle in a city that has endured over three months of social turmoil.

At a reception celebrating the 70th anniversary of the founding of the People’s Republic of China, the city’s leader said ongoing social unrest calls for more efforts to uphold the principle that guarantees Hong Kong’s unique advantages.

“One country, two systems” is much cherished by the central government and is the best arrangement for Hong Kong to maintain its long-term prosperity and stability

“One country, two systems” is much cherished by the central government and is the best arrangement for Hong Kong to maintain its long-term prosperity and stability, Lam said.

The reception was held by Friends of Hong Kong Association, which is made up by community leaders, political leaders and business elites. Director of the Liaison Office of the Central People’s Government in the Hong Kong Special Administrative Region Wang Zhimin and the Commissioner of the Ministry of Foreign Affairs in the HKSAR Xie Feng also attended the reception.

The central government has made it clear, on many occasions, that it will unswervingly implement “one country, two systems” and ensure it is fully applied in Hong Kong without being bent and distorted, Lam added.

For the past seven decades, Hong Kong’s destiny has been intertwined with that of the nation’s, Lam said.

Hong Kong is more than a witness and contributor — as it has participated and benefited from the nation’s development, she explained.

Since the nation’s opening-up in 1978, numerous entrepreneurs from Hong Kong brought capital, talents and management experience, professional services and international connections to the Chinese mainland.

In return, Hong Kong has capitalized on being the nation’s gateway to the international market while transforming itself into a world-class center for trade, logistic, shipping, finance and professional service.

In the meantime, the nation has made outstanding achievements in areas such as the economy, culture and technology in the past 70 years, while greatly increasing its international influence.

Looking forward, Lam said Hong Kong will continue to play an important role in the nation’s deepening reforms and opening-up, by actively participating in national policies such as the Guangdong-Hong Kong-Macao Greater Bay Area and the Belt and Road initiative.

Hong Kong can develop and diversify its economy while making contributions to the nation’s development, she added.