Fitness industry works up a sweat in internet age

Millions use online platforms to back athletic lifestyles 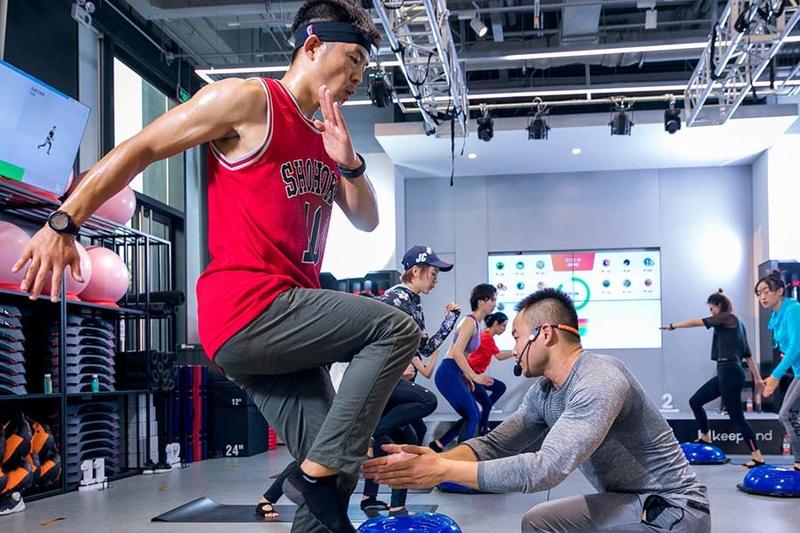 A trainer teaches at a gym in Beijing in October. (PHOTO PROVIDED TO CHINA DAILY)

Liu Ya, a 28-year-old manager at a public relations agency in Beijing, switches on her phone and opens a fitness app.

With just a few taps, she has registered for her weekly barre class, which involves using a handrail that provides support for various types of exercise, incorporates movements derived from ballet, and combines positions and movements drawn from yoga and Pilates.

On a designated day, Liu goes to the fitness room, checks in with her phone, changes into sports gear and awaits the start of the class with 39 others.

More and more people (are) appreciating the beauty of a healthy, slim, or even muscular shape

This is her routine before each weekly workout. After an hour of sweaty activity, she sometimes takes photos of the session to post on WeChat.

"I think the internet has really changed the way people work out," she said. "The fitness apps give us more options. Rather than just going to a gym and training by yourself or hiring a private trainer, they can link online and offline alternatives."

According to a report from market research consultancy Analysys in Beijing, as of April, more than 68 million people in China were using online platforms to support sporty lifestyles - a year-on-year rise of 2.22 percent.

Li Jinyi, vice-president of Keep, said online users' needs will be upgraded and Keepland can keep up with such changes.

"Users may not have that much time to go online and find solutions, or they can't find exactly what they need. But the offline courses can help locate weaknesses or provide future goals, which coaches can guide people to attain," he said.

Fitness brand SpaceCycle was launched in 2015 by Matthew Allison, the former president of EMI Music in Asia, and now has six clubs in Beijing, Shanghai and Taipei, in Taiwan, offering cycling, yoga, barre and dance classes with inspiring background music. 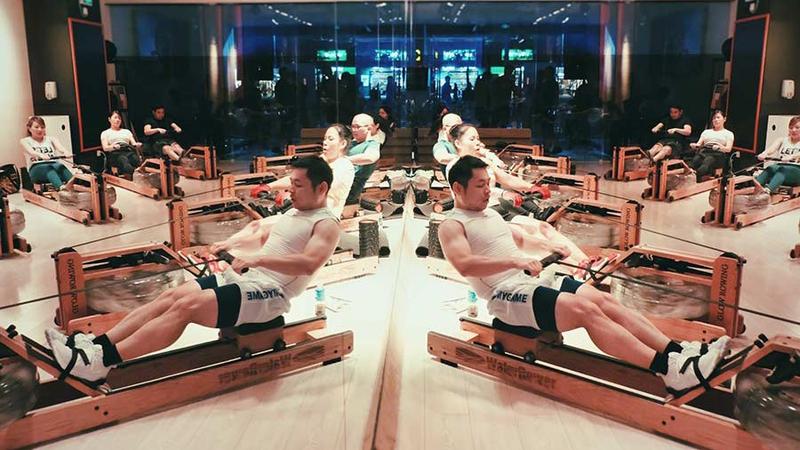 Members of Glow Rowing take a class. Water resistance machines provide users with a simulated rowing experience, and can exercise up to 84 percent of the muscles. (PHOTO PROVIDED TO CHINA DAILY)

Liu, a SpaceCycle member, said she sometimes uses its app for more than just registering for classes.

"You can search for some music and buy fitness gear with just one app. You can also post and browse photos of people working out, and chat with others to get motivation," she said. "I think the fitness apps are trying to mix working out and socializing."

Li said it is important to socialize, as people need encouragement from others to advance, and users can get together and form a community by attending offline salons or other activities at Keepland.

"It's hard to persist by yourself," he said. "But if you have a partner or team members, the interactions and encouragement can support you in finally achieving your goal."

Li said another reason to socialize is to help users improve their athletic performance, as they can communicate with coaches and exchange experiences with classmates after sessions, especially when more people want to work out and choose a suitable training plan.

Keepland has installed a screen that can interact with users by showing the latest content, technology and activities.

"It is also convenient for us to organize better offline activities, salons and discussions, and a variety of communication activities are even organized by users themselves. This is how we can provide more for the users," Li said. 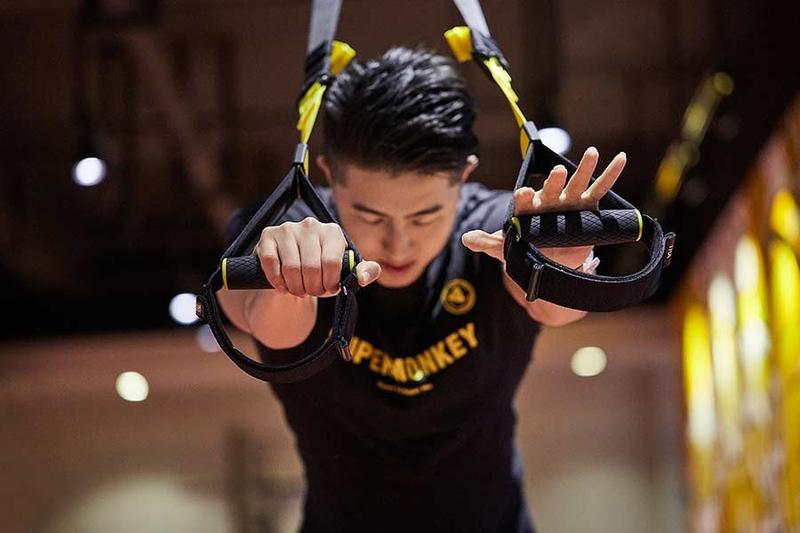 In recent years, the Chinese government has introduced policies to vigorously support the development of the health service and sports fitness industries, and to promote expansion of the fitness industry.

In 2013, the State Council issued a guideline to promote development of the health service industry - extending the nationwide fitness campaign and increasing awareness of physical fitness.

In 2016, the National Fitness Program for 2016-20 was launched by the State Council to promote overall health development, with the target of getting 435 million people to regularly take part in physical exercise by 2020.

According to IBISWorld, a global business intelligence information provider, over the past five years, the fitness industry in China has grown by 11.2 percent to reach revenue of US$7 billion this year. In the same time, the number of businesses has grown by 8.7 percent and the number of employees has risen by 7.6 percent.

With the number of traditional training facilities rising from about 500 in 2001 to more than 37,000 this year, different fitness brands providing personalized group classes on the internet, or related technology, are appearing and have proved popular, especially among the younger generation, according to the China Briefing website. 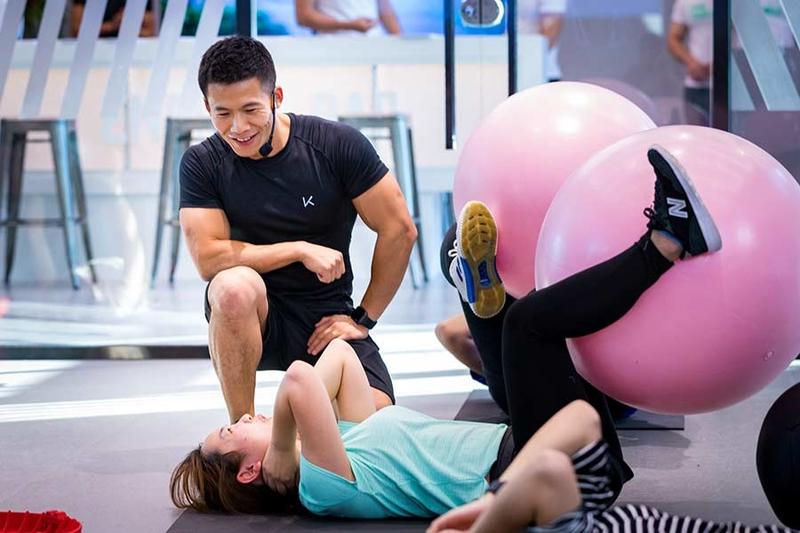 A client is instructed by a professional trainer at a Keepland Power Link class. (PHOTO PROVIDED TO CHINA DAILY)

Li said data collection and continued curriculum development as well as cooperation with other fitness systems has led to nearly 280 courses being provided to meet users' needs. The classes include "Bubble Butt" for hip and leg toning, "Core Master" for abdominal muscles, and dancing classes such as Zumba (a dance form with an aerobics fitness program).

"The fitness needs in China and abroad are quite different due to diverse cultural influences," he said. "For example, we have developed the 'Butt Shaper' lesson, which is more suitable for Chinese, as female practitioners wish to reshape their hips, but want to keep their legs slim at the same time."

Founded in 2014 in Shenzhen, Guangdong province, Supermonkey now has more than 100 fitness rooms in seven cities, including Beijing and Shanghai.

Xia said curriculum innovation reflects changes in the fitness concept in China, as more people now understand that this is essentially a way of life.

Liu said the classes she has registered for with SpaceCycle, which she takes once or twice a week, allow her to meet basic exercise needs and maintain her health.

"People used to think that being skinny was beautiful, especially for women," she said. "But now the concept has been changing, with more and more people appreciating the beauty of a healthy, slim, or even muscular shape."

Meanwhile, customers are paying more attention to the quality of classes, another change brought by the increased awareness of fitness.

Liang Junyao, a 30-year-old graphic designer who takes classes at Supermonkey, said small-sized ones can greatly improve her athletic ability, since coaches can take care of each member and offer advice.

Liang said a traditional gym may be more suitable for those who have already formed fitness habits, have a certain level of knowledge of the subject, and know how to use the facilities, while small-sized classes are ideal for newcomers or those who need inspiration and instruction.

"Many traditional gyms have similar courses, but they always have too many members at a time when the coaches may not have proper qualifications," he said. 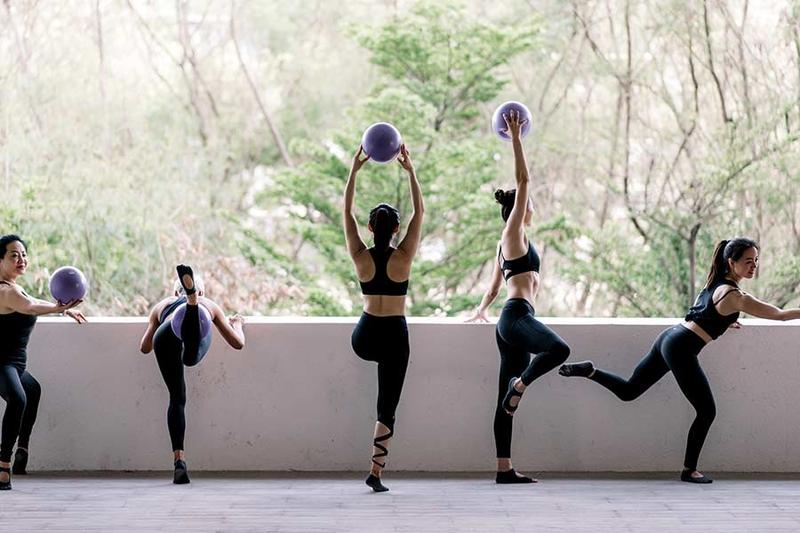 Coaches at Supermonkey prepare for a barre class, which uses movements from ballet, as well as yoga and pilates positions. (PHOTO PROVIDED TO CHINA DAILY)

Liang has frequently attended a group class studio at Supermonkey, whose instructors all have international qualifications, and some are even regional project leaders for world-class fitness regimens in China.

Li, from Keep, said most of the coaches at Keepland are self-trained, but he will invite some from the industry with the right qualifications to work part-time, especially when there are not enough coaches to match the number of courses.

Keepland recently signed an agreement with the Champion Foundation, which was established by former speed skater Yang Yang in 2008 to help retired athletes. These athletes have provided a steady supply of coaches for the brand.

With consumption upgrades accelerating, more people are paying attention to their quality of life and physical health, and are more willing to pay for "fitness consumption", according to a report on Chinese consumers released by consulting company Accenture in July.

Last year, the value of China's fitness industry was about 150 billion yuan (US$21.43 billion), and its compound annual growth rate in the past six years was 7.7 percent, according to analysis company Zhi Yan.

Targeting clients ages 25 to 35 in first - and second-tier cities, Supermonkey wants to take the retail route to encourage more people to work out, Xia said, with the main consumption method being pay-per-visit.

Each class costs less than 100 yuan at most of the facilities, including Keepland, Supermonkey and Space-Cycle. In addition to paying each time they visit, customers can choose to buy packages for fitness classes.