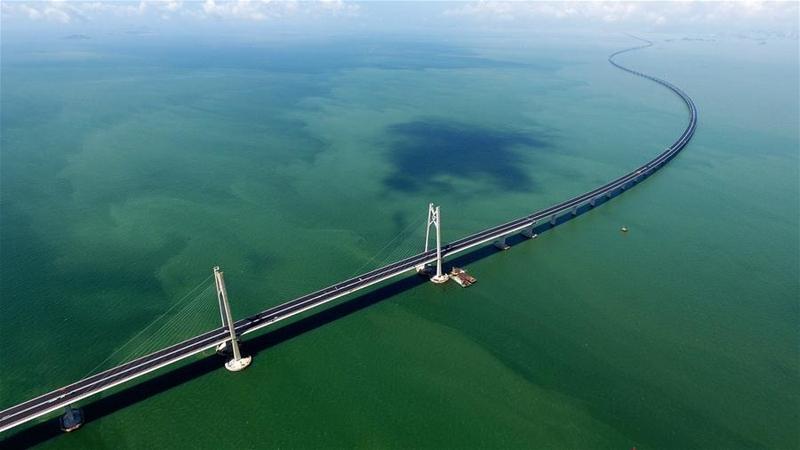 BEIJING – With a master plan unveiled Monday, China has stepped up efforts to develop its southern bay area around the Pearl River Delta into a world-class city cluster that will lead the country's opening-up and innovation in decades to come.

As a highly open and vibrant region in China, the Bay Area accounts for less than 5 percent of the country's total population but contributes around 12 percent of the national GDP.

The outline development plan, with goals covering the period from now to 2022 and extending to 2035, says the Bay Area will also become a globally influential international innovation and technology hub, an important support pillar for the Belt and Road Initiative, a showcase for in-depth cooperation between the mainland and Hong Kong and Macao, and a quality living circle for living, working and traveling.

Analysts believe the Bay Area will play a more active role in further expanding the forefront of the country's opening-up and generating fresh momentum for high-quality development.

With opening-up as one of the key words, the plan highlights a better business environment, higher level of market integration and alignment with international market norms and standards in the Bay Area, in a bid to provide stronger support for the Belt and Road Initiative.

Investment will be facilitated and trade will be liberalized. The flow of people and goods will be easier.

Multinationals will be encouraged to build headquarters there, as well as set up research and development centers, labs and innovation platforms.

The plan clearly maps out the development and division for regions involved and will enable Hong Kong to make full use of its advantages, said Benjamin Hung Pi Cheng, Greater China and North Asia chief executive of the Standard Chartered.

Hong Kong's role as the international financial, shipping and trade center and aviation hub will be strengthened, and its position in offshore renminbi business and international asset management will also be improved.

Macao will develop into a world tourism and entertainment center, a platform to expand commerce and trade cooperation between China and Portuguese speaking countries, and a cultural exchange and cooperation base.

Meanwhile, Guangzhou will reinforce its role as a global commerce and trade center and aim for an international metropolis, and Shenzhen will strive to become a city of innovation with global influence.

"The Greater Bay Area with stronger global competitiveness will play a more important role in China's new round of opening-up," said Chi Fulin, head of the China Institute for Reform and Development.

Technological innovation will serve as a major driving force for the Bay Area as China has started to put more emphasis on economic quality. One of the goals written into the plan is to build a globally competitive modern industrial system.

"The Greater Bay Area has a 10-trillion-yuan market (US$1.48 trillion), 270 industrial clusters and 330 specialized markets, which offer huge room for the commercialization of research findings," said Deng Jiangnian, president of the Academy of Greater Bay Area Studies.

While universities in Hong Kong boast strong scientific prowess, Shenzhen is the vanguard of high-tech sectors, and the cities of Dongguan and Zhongshan are leading manufacturing bases, which will lead to highly-complementary and mutually beneficial regional cooperation.

"With the consolidation of financial, technological innovation and manufacturing resources, the Greater Bay Area will become one of the most competitive bay areas in the world, with foreign enterprises attracted and national competitiveness enhanced," Hung Pi Cheng said.