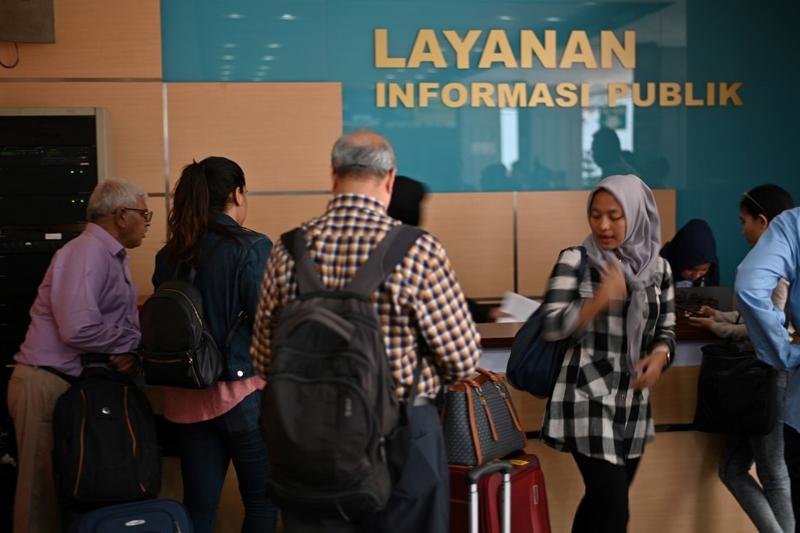 Family members of Lion Air flight 610 victims, which crashed into the sea shortly after takeoff on Oct 29, 2018, killing all 189 on board, register for a meeting with Indonesia's National Transportation Safety Committee in Jakarta on Oct 23, 2019. (BAY ISMOYO / AFP)

Flaws in the design of Boeing Co.’s 737 Max and lack of information on how to deal with malfunctions in one of the jet’s flight-control systems contributed to last year’s crash of Lion Air Flight 610, which killed 189 people, Indonesian investigators found.

In a nine-point presentation to the victims’ families, the National Transportation Safety Committee criticized certification procedures for the jet, saying that a flight-control mechanism was approved based on incorrect assumptions. The so-called Maneuvering Characteristics Augmentation System was also implicated in the crash of an Ethiopian Airlines 737 Max in March that claimed 157 lives.

The findings by Indonesian investigators were presented Wednesday to the victims' families, ahead of the release of the final report on the crash due at 2 pm local time Friday

“Only after the tragedy in Ethiopia, they concluded that it’s Boeing’s fault. Why didn’t they say it in the first place?” said Evi Samsul Komar, whose 24-year-old son died in the Oct 29 Lion Air crash. “Up until now, we never been contacted by Boeing,” he said after the briefing in Jakarta.

Indonesian investigators are due to publish their final report on the crash at 2 pm local time Friday.  The findings could influence regulators worldwide as they assess the fate of what was Boeing’s best-selling plane, which has been grounded globally since March 13, costing the company over US$8 billion. The head of its jetliner division stepped down Tuesday after less than three years in the job.

The 737 Max’s MCAS feature, which automatically pushes the plane’s nose downward if it detects danger of an aerodynamic stall, has long been in focus in investigations into the two crashes. In its slideshow Wednesday, the NTSC said the system was too reliant on a single angle-of-attack sensor, making it vulnerable if that sensor malfunctioned and transmitted erroneous readings.

The government agency said a lack of guidance around MCAS made it harder for crews to respond to automated actions by the system. It also said that a replacement sensor on the doomed Lion Air plane wasn’t properly calibrated during an earlier repair, and that this error hadn’t been detected. A lack of documentation made it more difficult for maintenance and accident crews to take appropriate actions, a slide showed.

“I’m not satisfied with the briefing and the explanation but this is the result,” said Komar, who was accompanied by his wife and broke down in tears while speaking to reporters.

Lion Air and the country’s civil aviation authority recently objected to findings in a draft of the final report because on grounds they received too much of the blame, people familiar with the matter said last month. One of the people said at the time that 25 of 41 lapses were directed toward the airline.

The findings presented Wednesday suggest a problem with the plane’s design rather than a software issue, said Satyendra Pandey, a New Delhi-based independent analyst and former head of strategy at Go Airlines India Ltd.

“Going back to revisit the design itself has tremendous ramifications for Boeing — both in terms of cost and liability,” he said. “It can be assumed that Boeing will contest this and point to software as the flaw.” 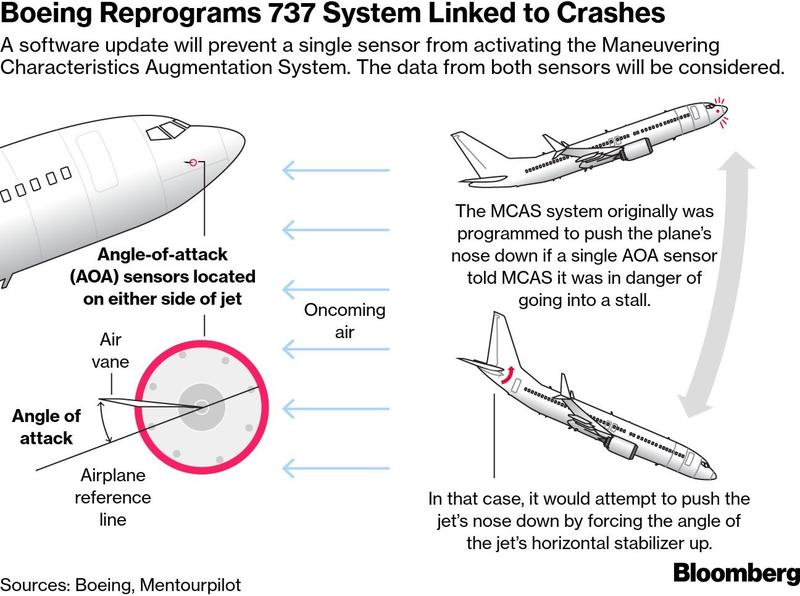 A Boeing representative wrote in an email that it was too premature to comment on the report as it hasn’t been officially released by Indonesian investigators. Lion Air didn’t immediately respond to calls seeking comments.

Recently published messages between two senior Boeing test pilots showed they had misgivings about the MCAS on 737 Max jets during its certification in 2016, with one describing its handling performance as egregious.

The US Federal Aviation Administration, which has faced criticism for approving the feature and giving Boeing too much authority to oversee itself, said Friday that it was concerned by comments in the messages between the two pilots and chastised Boeing for not sharing the information sooner. Boeing said it told regulators it had expanded the role of the flight-control software.

“As we have suspected since the very beginning, the accident was caused by these two institutions, Boeing and FAA,” said Latief Nurbana, whose 24-year-old son died in the Lion Air crash. “FAA shares the blame as the certification process was not conducted thoroughly.”

Problems with the three-month-old Lion Air jet’s sensors had been reported on three previous flights, including one made from Bali the day before the crash. In that instance, an off-duty pilot traveling in the cockpit identified the problem and told the crew how to disable the malfunctioning control system. However, the pilots didn’t report key issues with the flight after they landed.

A different crew was on board the following day. Flight 610 took off from Jakarta at 6:20 am on the Monday Oct 29, heading to the tourist destination of Pangkal Pinang, off Sumatra’s east coast. About 13 minutes later, it plunged into the sea after the pilots - an Indian and Indonesian - were unable to regain control in a battle with the controls to keep the aircraft from repeatedly diving.

This was Indonesia’s deadliest airline crash since 1997 and reignited worries about the country’s aviation safety record. The nation’s airlines, including Lion Air, were banned from flying to the European Union and the US for almost a decade until 2016 because of safety concerns.

Boeing Chief Executive Officer Dennis Muilenburg is due to face questions from lawmakers in Washington in less than two weeks. The company was hit with a lawsuit earlier this month demanding records that will allegedly show if mismanagement is to blame for safety issues leading to the grounding of the 737 Max fleet. Boeing is due to report quarterly results ahead of Wednesday’s market open in New York.