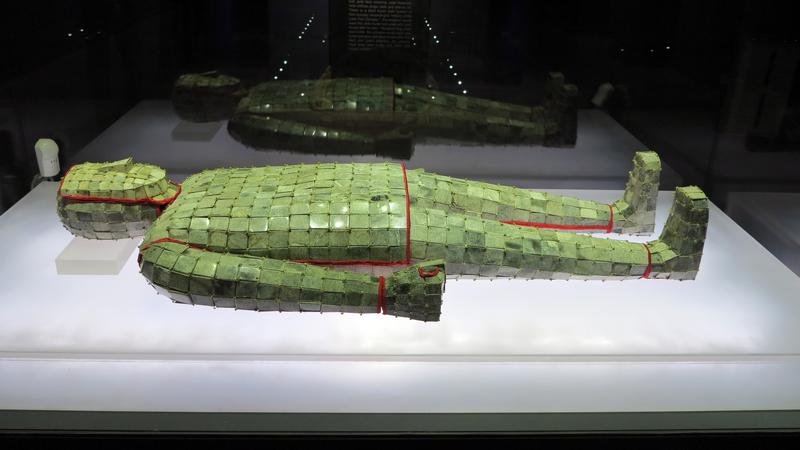 A jade outfit sewn using gold thread is one of the highlights of the exhibition in Riyadh, which was exclusively for emperors and their closest kin. (PHOTO PROVIDED TO CHINA DAILY)

From December 2016 to March 2017, a major cultural relics exhibition, Roads of Arabia: Archaeological Treasures of Saudi Arabia, was held at the National Museum of China in Beijing. Its closing ceremony was attended by President Xi Jinping and Saudi King Salman bin Abdulaziz Al Saud in a mark of its success.

The exhibition, which included 400-odd artifacts from 15 Saudi museums, served as a reminder to the Chinese public that Saudi Arabia can not simply be stereotyped as a land of oil and wealth, but also as a country with a rich history and culture.

Following a nihao (hello) from the Saudi side, it is now the turn of their Chinese counterparts to reply with a "salaam" by sending some of their national treasures to Riyadh to showcase the prominence of ancient Chinese civilizations.

Treasures of China will open at the National Museum of Saudi Arabia on Sept 13, putting 264 exhibits, including 173 cultural relics, from China on display, it was announced at a news conference in Beijing last week.

This will be the largest Chinese cultural relics exhibition ever to be held in the region, and is due to run until Nov 23.

According to Xu He, curator of the exhibition from Art Exhibitions China, an organization in charge of Sino-foreign cultural relics exchange exhibitions, 13 institutions nationwide－including the Palace Museum in Beijing, the Shaanxi History Museum in Xi'an, and the Luoyang Museum in Henan province－sent contributions from their collections for the upcoming exhibition.

"We want to present a comprehensive history of China to Saudi visitors," Xu says. "The artifacts will be displayed in time order.

"The different facets of the Chinese dynasties over the centuries are shown through people's lifestyles, artistic achievements and their communication with foreign countries," she says. "The continuity and inclusiveness of Chinese civilization will be reflected through this."

Many of the most globally recognized Chinese cultural relics have been chosen for this exhibition, like the oldest artifact in China's catalog－a pot dating back to 3000 BC which is decorated with images of human faces and fish. It was unearthed in Banpo, a Neolithic relic site in Shaanxi province.

The world-famous Terracotta Warriors, which will also be on show, are known for being the life-size figurine soldiers that guard the mausoleum of Qinshihuang, the first Chinese "emperor" from the 3rd century BC, in today's Xi'an.

Staff in Beijing pose with a 5,000-year-old pot and a Terracotta Warrior, both from Shaanxi province. (PHOTO BY ZOU HONG / CHINA DAILY)

A two-meter-high figurine of an admiral was chosen for the exhibition to allow people to catch a glimpse of "Qinshihuang's secret army". Admiral figurines are very precious, since only a handful of them were dug up during the excavation work at the mausoleum.

It might be the case that this warrior was selected for his friendly gesture, as he looks like he's about to shake hands. He will also be escorted by three soldiers and a horse-drawn chariot from the mausoleum for this trip to Riyadh.

"This (display) will be the most number of Terracotta Warriors that we have ever agreed to send abroad for a comprehensive exhibition," Xu adds.

Another highlight will be a jade outfit sewn with gold threads. Burial suits like these were used exclusively for emperors and their closest kin during the Han Dynasty (206 BC to AD 220). It was unearthed from a Han vassal king's tomb in today's Xuzhou, Jiangsu province.

The curator was careful to select items that specifically reflect Chinese national totems like the easily-recognizable C-shaped jade dragon and items bearing images of dragons and phoenixes, and items that connect with Arabic culture.

"The ancient Silk Road was crucial conduit for cultural communication between the Islamic world and China," Xu says. "This is why we have so many cultural relics in China that reflect the influence of Islamic culture."

Staff in Beijing pose with a 5,000-year-old pot and a Terracotta Warrior, both from Shaanxi province. (PHOTO BY ZOU HONG / CHINA DAILY)

Many of the exhibits from the Tang Dynasty (618-907) used figurines on camels and figurines of Western Asian people; ceramics inscribed with Arabic words, and Islamic tombstones from Zayton (today's Quanzhou, Fujian province)－a pivotal trade port on Maritime Silk Road in the Song (960-1279) and Yuan (1271-1368) dynasties.

Speaking about the upcoming event, Fahad Majed Alshareef, the Saudi cultural attache in China, says: "Saudi people have great expectations for the exhibition because it is a rare chance for us to see the brilliance of traditional Chinese culture first hand."

"The connection between China and Saudi Arabia is another example that shows how different civilizations and religions continue to maintain dialogue and learn from each other."

He also adds that China's Belt and Road Initiative can link more closely with the Saudi Vision 2030 plan through projects like this. The Saudi plan aims to reduce the country's dependence on oil and diversify the Saudi economy by developing public service sectors－including culture and tourism.

In January 2016, during President Xi's visit to Saudi Arabia, the State Administration of Cultural Heritage signed a memorandum of understanding with the Saudi Commission for Tourism and National Heritage to promote comprehensive bilateral cooperation in the cultural heritage sector.

The upcoming exhibition in Saudi Arabia will showcase ancient Chinese civilization and the history of the Silk Road through 173 cultural relics. (PHOTO PROVIDED TO CHINA DAILY)

The exchange of exhibitions by the two capital cities of the respective countries is only a part of this joint framework, according to Xie Bing, director of the SACH foreign communications department.

Meanwhile, from March to April this year, archaeologists from the National Center of Underwater Cultural Heritage conducted a joint research project with Saudi experts on al-Serrian, the ruins of an ancient port city near Mecca, which boomed between the 9th and 13th centuries.

"Achievements in the underwater excavation work have gone far beyond our expectations," Xie says. "Many crucial pieces of evidence about the Maritime Silk Road were unearthed during the archaeological survey."

Chinese porcelain pieces from the Song and Yuan dynasties were found at the ruins.

The upcoming exhibition in Saudi Arabia will showcase ancient Chinese civilization and the history of the Silk Road through 173 cultural relics. (PHOTO PROVIDED TO CHINA DAILY)

Some of the newest findings from al-Serrian will also be displayed at the exhibition in Riyadh alongside artifacts supplied by Chinese museums for comparison.

For example, a bronze counterweight from al-Serrian will be juxtaposed with an counterpart from the Nanhai One, the sunken wreck of a Song Dynasty merchant ship discovered in the South China Sea.

Xie also says that the project in al-Serrian will mark the start of a five-year archaeological cooperation program between the two countries, and more projects－both undersea and land-bound－are due to follow.

He also says that cooperation on cultural heritage will expand to cover more fields, such as staff training, development of protection technologies, fighting the