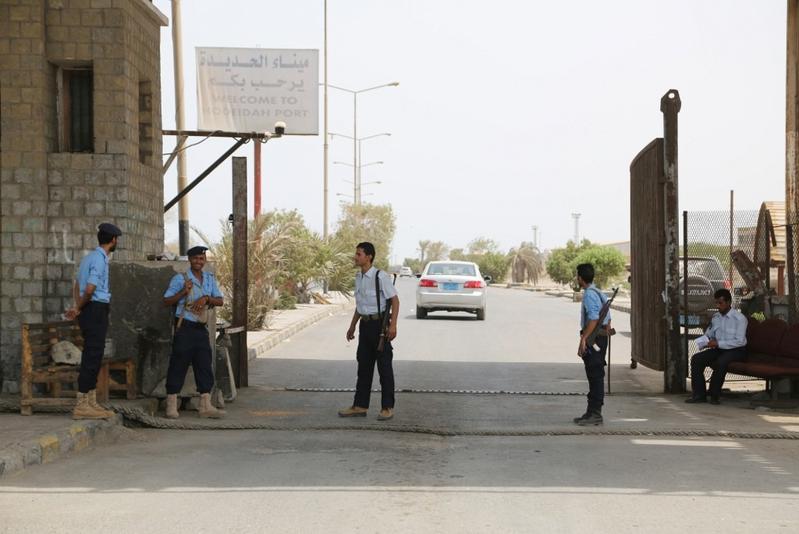 Yemeni coast guards stand at the entrance of Saleef port in the western Red Sea Hodeida province after their redeployment following the withdrawal of Huthi rebel fighters, on May 13, 2019. (PHOTO / AFP)

The Houthis began withdrawing from three ports on Saturday, including Hodeidah port - a lifeline for millions of Yemenis threatened by starvation because of the four-year war, as it is the main entry point for food imports and humanitarian aid.

a senior official from the UAE

A military coalition led by neighboring Saudi Arabia, which receives weapons from the West, intervened in Yemen in March 2015 after the Iran-aligned Houthis ousted President Abd Rabbu Mansour Hadi's government from the capital Sanaa. The war is seen as proxy war between Saudi Arabia and Iran.

The Houthis and coalition forces both reported renewed clashes in Hodeidah on Wednesday, a day after the Houthis claimed responsibility for a drone attack that Saudi Arabia said had hit two of its oil pumping stations.

The Saudi-led coalition will "retaliate hard" for any Houthi attacks on coalition targets but remains committed to a Hodeidah peace deal, said a senior official from the United Arab Emirates, which is part of the coalition.

Lieutenant General Michael Lollesgaard, who heads a UN monitoring mission in Hodeidah, said that while there had been an increase in violations of the ceasefire on Wednesday, "it is not an alarming number ... I think the number that we have now is pretty much what we saw in some of the days before Ramadan."

The Yemen government and the Houthis met in the Swedish capital Stockholm in December and agreed to a ceasefire and troop withdrawal deal for Hodeidah. Under phase one of the deal, the Houthis withdrew from the ports of Hodeidah, Saleef and Ras Isa.

This is due to be met by a retreat of Saudi-led coalition forces from the eastern outskirts of Hodeidah, facilitating humanitarian access to grain stores at the Red Sea Mills.

However, Lollesgaard said on Wednesday that a phase one withdrawal by government and coalition forces would not take place until the warring parties have worked out details for a broader phase two redeployment around Hodeidah and agreed on local forces to secure the area.

"We need to finalise phase two and the question of the local security forces before we start the full implementation of phase one," Lollesgaard told reporters at the United Nations in New York via video.

"We will never get a perfect plan for phase two ... both parties need to compromise," he said. "The same goes for the local security forces (deal). We could be done in two weeks, but it can also take months if there is no willingness."

The UN Security Council was briefed on the situation in Yemen earlier on Wednesday.

Acting US Ambassador to the United Nations Jonathan Cohen called on all parties to negotiate in good faith to reach a deal on local security forces, exercise restraint and enable the UN efforts on the ground, particularly by granting entry to the country for UN monitors.

"Obstruction of the UN process cannot be tolerated. For months apparent breakthroughs have happened just in time for Security Council briefings, then progress stalls," he said. "Council members must consider how to hold parties responsible if they don't implement the Stockholm agreement."

Lollesgaard said there were 15-18 UN monitors on the ground in Hodeidah, but that another 30 monitors were still waiting for the Houthis to grant them a visa.

Tens of thousands of people have been killed during the conflict in Yemen, many of them civilians, and aid agencies say the humanitarian crisis is the worst in the world.