How prepared is EU for no-deal Brexit? 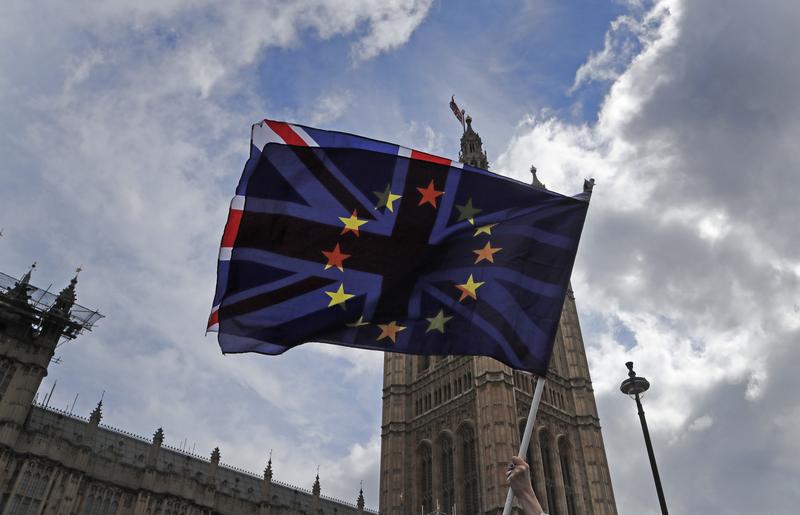 BRUSSELS — European leaders have warned that a no-deal Brexit, while not their wish, is now "very likely", as Britain is still frenziedly seeking an orderly exit days before April 12, the end of the first Brexit extension, and some EU officials have insisted that they are ready for no-deal. Is that true? And what's EU's Brexit preparedness?

Satellite navigation systems are also being protected, as the European Commission has been in the process of moving back-up systems for its Galileo Global Satellite Navigation System from British territories to EU member states

The European Commission, the EU's executive, has published 90 Brexit preparedness notices, ranging from aviation safety to customs rules, which advise European citizens, business, and organizations on how to prepare for the withdrawal of the UK, including specific information about a no-deal scenario.

The Commission has also approved over 40 legislative initiatives or legal acts that are either already in force, under negotiation with other EU institutions, or in the process of being implemented.

What happens to EU businesses that trade with the UK?

Without a deal, trade between Britain and the European Union will revert to World Trade Organization (WTO) rules, impacting European businesses trade with the country as customs procedures are reintroduced.

The European Commission is advising businesses in Europe that the movement of goods to the UK will require export declarations, and that movements of excise goods may require additional electronic administrative documents.

According to the Commission, goods entering the EU from the UK will be subject to Value Added Tax (VAT) charges by member states, while goods exported to the UK will be exempt from VAT. The Commission has also warned that rules for the declaration and payment of VAT will change, including for supplies of services, as will the rules for cross-border VAT refunds.

Within the EU, import and export licences issued by the UK will no longer be valid, as well as any other authorizations for customs simplifications or procedures.

To help EU businesses prepared for Brexit, the European Commission has provided a customs guide for EU businesses. 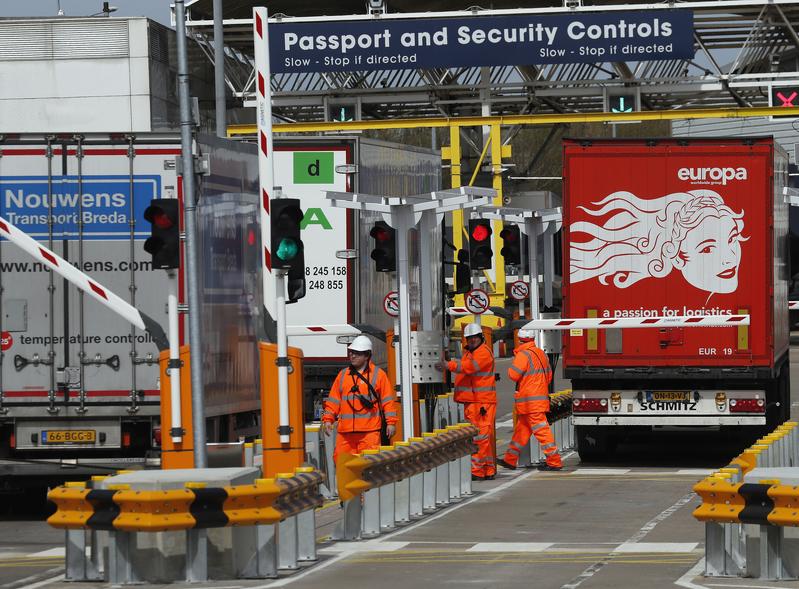 Eurotunnel staff check trucks at the newly built checkpoint in Folkestone, England, April 5, 2019. The new checkpoints will enable trucks to be checked and custom documents scanned with the aim of speeding up the custom process after Brexit. (FRANK AUGSTEIN / AP)

Will transport be affected between EU and UK?

Legislation has entered into force, following approval by the Council of the European Union and the European Parliament, for temporary measures to allow air, road, and rail transport to continue with only minor disruptions in the case of a "no deal" scenario.

The measures are contingent on the UK maintaining certain safety are regulatory standards, and limited in duration: air rules will be applicable until March 30, 2020, road traffic and freight regulations until Dec 31, 2019, and rules for rail transport and freight until nine months after the rules entering into force.

The North Sea-Mediterranean Core Network Corridor, one of nine core corridors in the Trans-European Transport (TEN-T) Network, and which runs from Edinburgh, Scotland, to Marseille, France, has been realigned following the Council of the European Union and European Parliament approval in order to include new maritime routes between Ireland and Northern France.

Satellite navigation systems are also being protected, as the European Commission has been in the process of moving back-up systems for its Galileo Global Satellite Navigation System from British territories to EU member states. According to the European Commission, Galileo sensor sites in the British territories of the Ascension and Falkland Islands are being removed.

The system, which the Commission reports to have served positioning and timing services to some 600 million users since 2016, should have the capacity to continue operating smoothly without the two stations, which under security protocols cannot be held "in the territory of third countries". 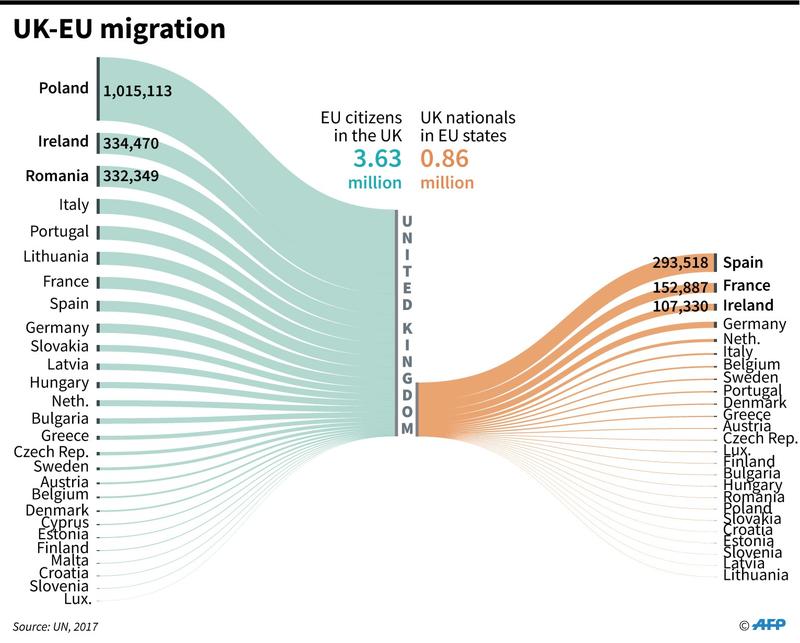 This AFP graphic shows EU citizens in the UK and UK nationals in EU states.

Will visas be necessary for travel between the EU and the UK?

Even in the case of a no-deal, British citizens should not be required to obtain visas for short visits to the EU of up to 90 days in any 180-day period, following the European Parliament's backing on last Thursday of legislation proposing a reciprocal visa waiver.

The waiver will be applicable in all EU member states, except for the Republic of Ireland, which has its own bilateral agreements for visa-free travel with the UK, and will also apply in Schengen associated countries (Iceland, Liechtenstein, Norway and Switzerland).

The legislation insists on reciprocity, however, and will only be applicable if London introduces similar visa-free travel rules for EU citizens in the UK. To enter into force in the case of a no-deal, the legislation will need to be formally accepted by the Council of the European Union and published in the Official Journal of the EU before April 12.

What happens to British nationals living in the EU?

As part of the preparations for a no-deal Brexit, EU member states are developing legislation in order to allow British citizens legally residing in the EU to continue residing legally. According to the European Commission, these preparations are ongoing, and each member state is preparing national legislation and procedures.

The French government, for example, has passed a national ordinance which will proposes a maximum 12-month grace period in which British citizens can continue living in France without a residence permit. This will allow British citizens up to a year to receive necessary permits, according to their situations, but also under the condition of reciprocity for French citizens in the UK. 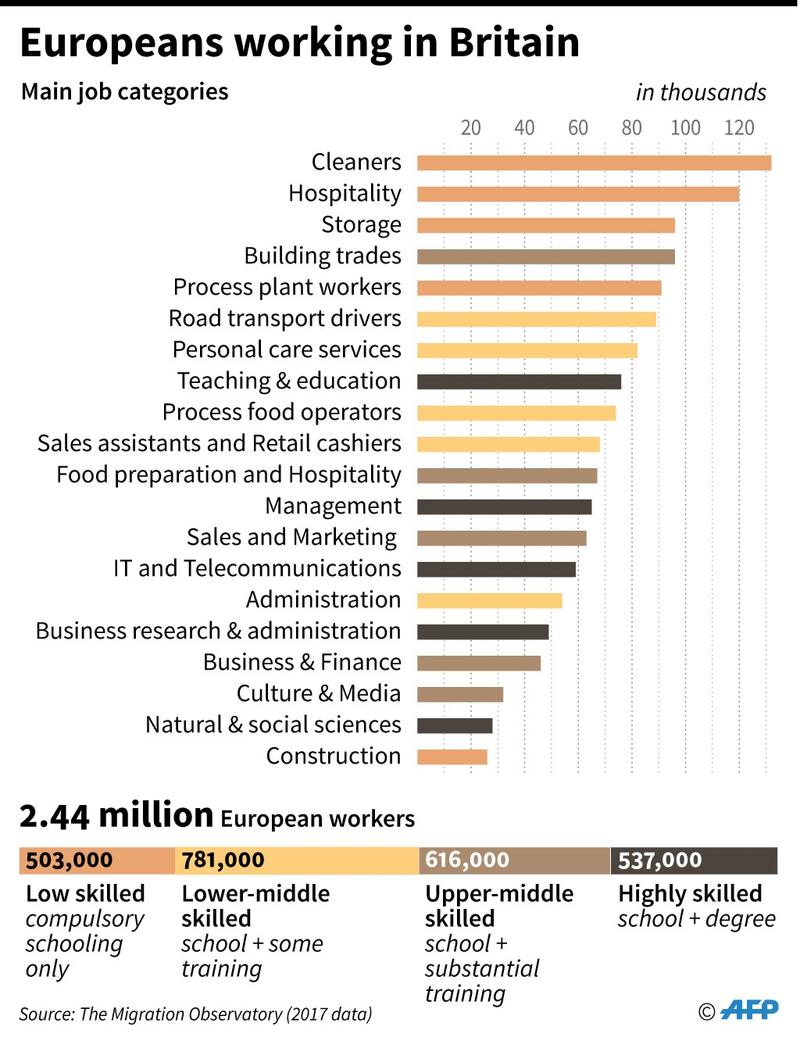 What other preparedness measures are being taken?

A wide range of other initiatives and measures are being taken by Brussels in order to limit the disruption of a disorderly no-deal Brexit. These include continued funding and support for the PEACE program in Northern Ireland, continuations of the ERASMUS+ study exchange program for EU and British students currently in the program, compensation for impacted industries such as fishing, and continued eligibility for UK beneficiaries of EU funding so long as the United Kingdom honors its financial obligations. What remains to be seen is what the EU has not been able to anticipate.