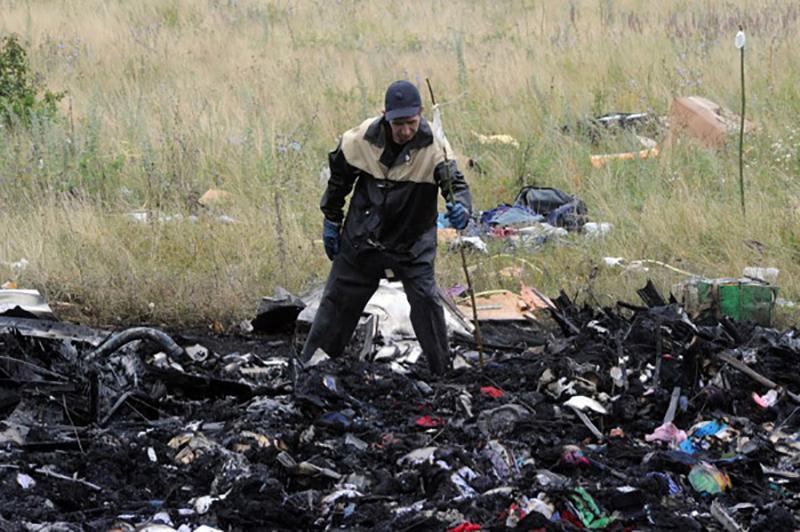 A rescue worker uses sticks to mark the location where bodies of victims have been found at the site of the crash of a Malaysian airliner carrying 298 people from Amsterdam to Kuala Lumpur in Grabove, in rebel-held east Ukraine, on July 18, 2014. (Dominique Faget / AFP)

CANBERRA – Australian parents who lost their three children in the MH17 disaster have become the first in Australia to settle with Malaysia Airlines over the crash of the flight in Ukraine, local media reported on Tuesday.

Three children of Anthony and Marite Maslin from Perth in Western Australia were travelling with their grandfather from Amsterdam to Kuala Lumpur when the plane crashed in eastern Ukraine on July 17, 2014, killing all 298 people on board.

"We can confirm that we have reached an amicable and confidential settlement with the Maslin family and therefore the suit has been withdrawn," the statement, obtained by News Corp, said.

"We will not however disclose any further details on this suit or about the details of the settlement in respect to the privacy of the family."

People arrange candles to offer prayers for the victims of the Malaysia Airlines Flight 17, at a shopping mall in Petaling Jaya, near Kuala Lumpur, Malaysia, July 18, 2014. (Joshua Paul / AP)

The Maslins told their lawyers that they suffered nervous shock and developed depressive and psychiatric illnesses that required counseling as a result of learning about the tragedy from news reports.

According to Zulkifli, there were still at least 10 Australian lawsuits in connection with the as a result of the MH17 crash which are yet to be settled. The airline had settled with a "substantial number of next of kin" from other nations, mostly from the Netherlands, where the plane originated, added Zulkifli.