US walks out of military cost-sharing talks with ROK 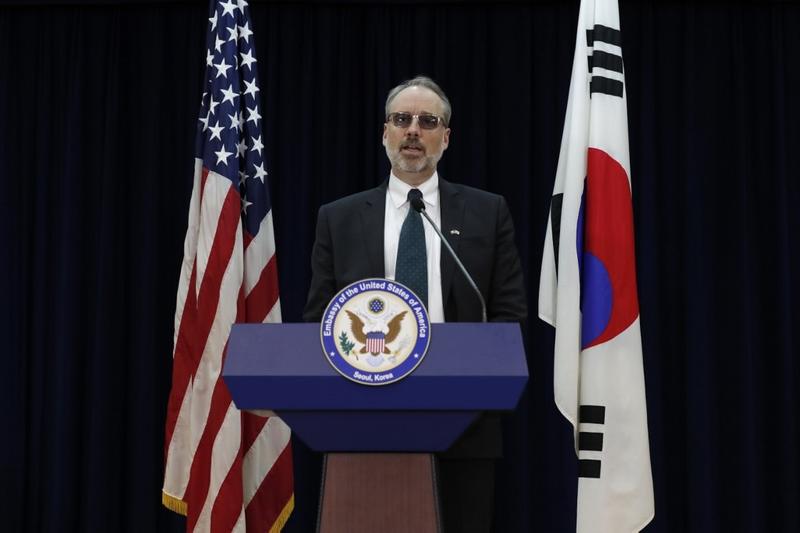 James DeHart, US Department of State’s senior advisor for security negotiations and agreements bureau of political-military affairs, speaks after a meeting with his ROK counterpart on the Special Measures Agreement (SMA) at the public affairs section of the US Embassy in Seoul on Nov 19, 2019. (PHOTO / AFP)

The US walked out of military cost-sharing talks with the Republic of Korea (ROK), after the key American ally balked at President Donald Trump’s demands for a five-fold funding increase.

The chief US negotiator, James DeHart, said that the American side cut short talks planned for Tuesday in Seoul because the Korean side “were not responsive to our request for fair and equitable burden-sharing.” The ROK foreign ministry said it had expected to discuss “an acceptable range for both counterparts” based on past cost-sharing discussions.

Jeong Eun-bo, who led the ROK delegation, separately told reporters that talks ended when his American counterparts “left their seats first,” adding the two sides had “quite a big difference in principle”

Jeong Eun-bo, who led the ROK delegation, separately told reporters that talks ended when his American counterparts “left their seats first,” adding the two sides had “quite a big difference in principle.” The current cost-sharing agreement reached earlier this year expires at the end of 2019.

The breakdown raises new questions about one of the US's closest military alliances and a key piece of the Pentagon’s strategy for countering the Democratic People’s Republic of Korea (DPRK). Trump sent a high-powered mission led by Defense Secretary Mark Esper to Seoul last week to try to convince Moon Jae-in’s government to pay more for hosting US troops.

Trump has demanded the ROK pay about US$5 billion for hosting US troops, well above the current one-year deal where Seoul pays about US$1 billion. The price tag originated with the White House, according to people familiar with the matter, and administration officials justify it by saying it reflects the costs the ROK would incur if it takes operational control of combined US-ROK forces in the case of a conflict.

Trump has repeatedly expressed frustration with the open-ended troop deployment, saying that after his first meeting with Kim Jong-un, the leader of the Democratic People’s Republic of Korea (DPRK) last year, he would “like to bring them back home, but that’s not part of the equation right now.” At the same time, he has accepted a long-standing Kim demand and suspended major joint military exercises that the two sides have relied on to maintain readiness.

ALSO READ: S. Korea, US hold talks on cost-sharing for US Forces Korea 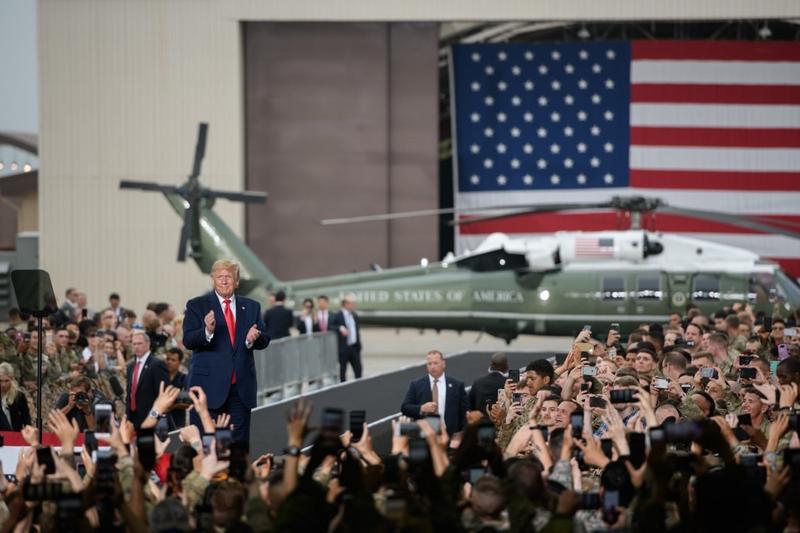 US President Donald Trump speaks as he meets US troops and their families stationed in South Korea in Osan Air Base, south of Seoul on June 30, 2019. (ED JONES / POOL / AFP)

The request for more money hasn’t sat well in the ROK, where many in Moon’s progressive camp and opposition conservatives have come out against demands seen as excessive

February - US, ROK reach one-year deal that calls for Seoul to contribute about US$1 billion to host some 28,500 US service members

The request for more money hasn’t sat well in the ROK, where many in Moon’s progressive camp and opposition conservatives have come out against demands seen as excessive. Moon, facing a sagging support rate, may not want to make any major concessions that further dent his popularity ahead of an election for parliament next year.

“I’m not going to prognosticate or speculate on what we may or may not do,” Esper said when asked during a briefing Tuesday in Manila about whether the US would consider reducing troop levels on the Korean Peninsula. “The State Department has the lead in these discussions, and I’m sure they are in capable hands. We just take this one step at a time.”

The US has about 28,500 service members in the ROK who help protect the country from the likes of the DPRK, one of the world’s most militarized states.

“We cut short our participation in the talks today in order to give the Korean side some time to reconsider and I hope to put forward new proposals that would enable both sides to work towards a mutually acceptable agreement in the spirit of our great alliance,” said DeHart, a senior State Department adviser for security negotiations and agreements.