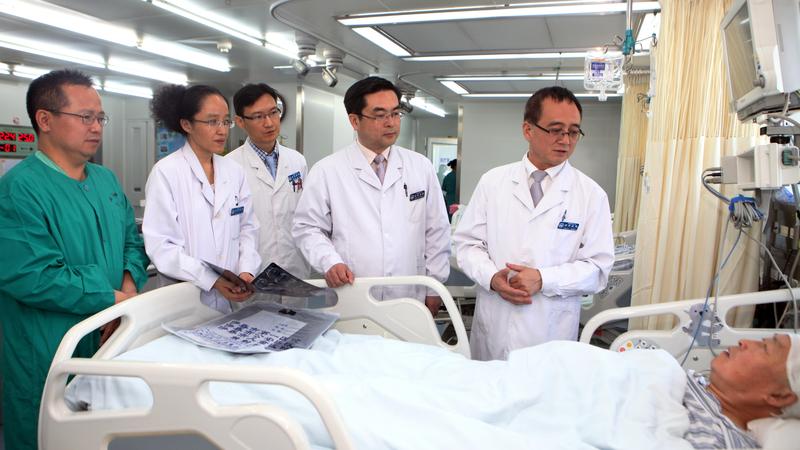 Li Yongjie (first right), director of the Beijing Institute of Functional Neurosurgery at Xuanwu Hospital, assesses a patient with colleagues during a ward round. (PHOTO PROVIDED TO CHINA DAILY)

Li Yongjie can still vividly recall the details of the first brain operation he conducted to treat Parkinson's disease after he returned from the United States 20 years ago.

"It was the first microelectrode-guided stereotactic surgery ever conducted in China. Although there was an assisting team, no one actually knew how to do it except me," said Li, director of the Beijing Institute of Functional Neurosurgery at Xuanwu Hospital, who is a pioneer in the field.

Stereotactic surgery was developed from the stereotactic method in the 1940s. The patient's head is held in a frame so a thin electrode can be precisely directed to the target area in the brain through a small hole bored in the top of the skull.

A human brain has 60 to 70 billion cells. If each cell were a star, the brain would be as infinite as the universe ... I would like to take more adventures in it

Li Yongjie, director of the Beijing Institute of Functional Neurosurgery at Xuanwu Hospital

Hoping the advanced technique would take root in China, Li was clear about the significance of the first operation. He didn't sleep well for several nights before the surgery, and went over the procedures again and again in his head.

On July 12, 1998, he completed the operation in eight hours, mostly by himself. "I blended and injected the anesthetics, installed the fixing frame on the patient's head, scanned the brain with magnetic resonance equipment, calculated the position of the target spot, and comforted the patient during the operation," he recalled.

The surgery was successful. More patients came to him. By the end of that year, Li and his team had worked out a set of standard procedures and performed dozens of operations each month, each taking just two hours.

"I brought back the operational skills as a seed, and it has grown into a thriving tree," Li said.

The institute now treats more than 30 neurological dysfunctions, including epilepsy, dystonia (repetitive muscle contractions) and chronic pain, making it one of the world's most comprehensive medical institutions in the sector.

Li attributes his achievements to China's reform and opening-up policy, which allowed him to be adventurous and have a say on his own destiny.

Born in 1961 in Datong, in the northern province of Shanxi, Li grew up during the "cultural revolution" (1966-76). His father, labeled a "rich peasant" - a member of the "exploiting class" who had to be "remolded" - urged him to study hard during those chaotic days.

"I was timid and reticent; I had to grow up early, and it was lonely," Li said.

China resumed the gaokao, the annual college entrance exam, in 1977. Li was happy to see the nation starting to embrace "the spring of science", which valued education and knowledge.

Good grades gave him confidence. He came top in a provincial physics competition in high school. In 1979, he enrolled at the prestigious Peking University to study medical science. 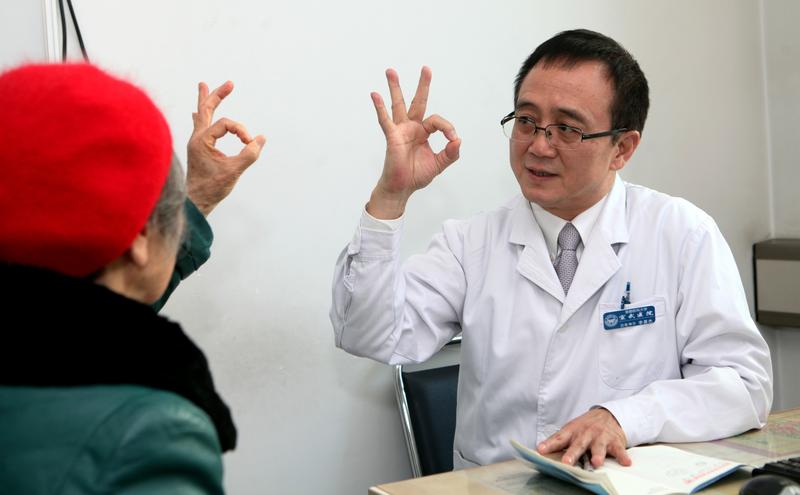 The neurosurgeon checks a senior’s digital flexibility in the outpatients’ department. (PHOTO PROVIDED TO CHINA DAILY)

"It wasn't really my choice. My mother wanted me to be a doctor," said Li, who took more than five years to agree that it was a worthwhile career. From then on, he was more aware of his inner voice at each decisive moment.

In 1994, Li, with a second degree, from Shanxi Medical University, gave up a steady job as a surgeon in Taiyuan, the provincial capital.

He then sold his allocated apartment - a much coveted asset under the housing distribution system - to pursue advanced studies at Johns Hopkins Hospital in Baltimore in the United States.

"When I was a graduate student, two teachers from the United States aroused my curiosity about the outside world. They were eloquent and open-minded, and the knowledge and techniques they brought to us were new and advanced," he recalled.

After China emerged from its long closure and began its reform and opening-up in 1978, many talented young Chinese went abroad to study to expand their horizons and better themselves.

At its peak in the 1980s and '90s, the TOEFL (Test of English as a Foreign Language) exam drew more than 100,000 students every year, because a pass was required for admission to universities and colleges in the US.

At Johns Hopkins Hospital, Li first witnessed the marvel of stereotactic surgery when it was used to treat a woman with Parkinson's disease.

Just seconds after the surgery, her right hand stopped trembling for the first time in 10 years. She turned her hand over and over, and tears welled in her eyes.

"I determined then to master the technique," Li said. 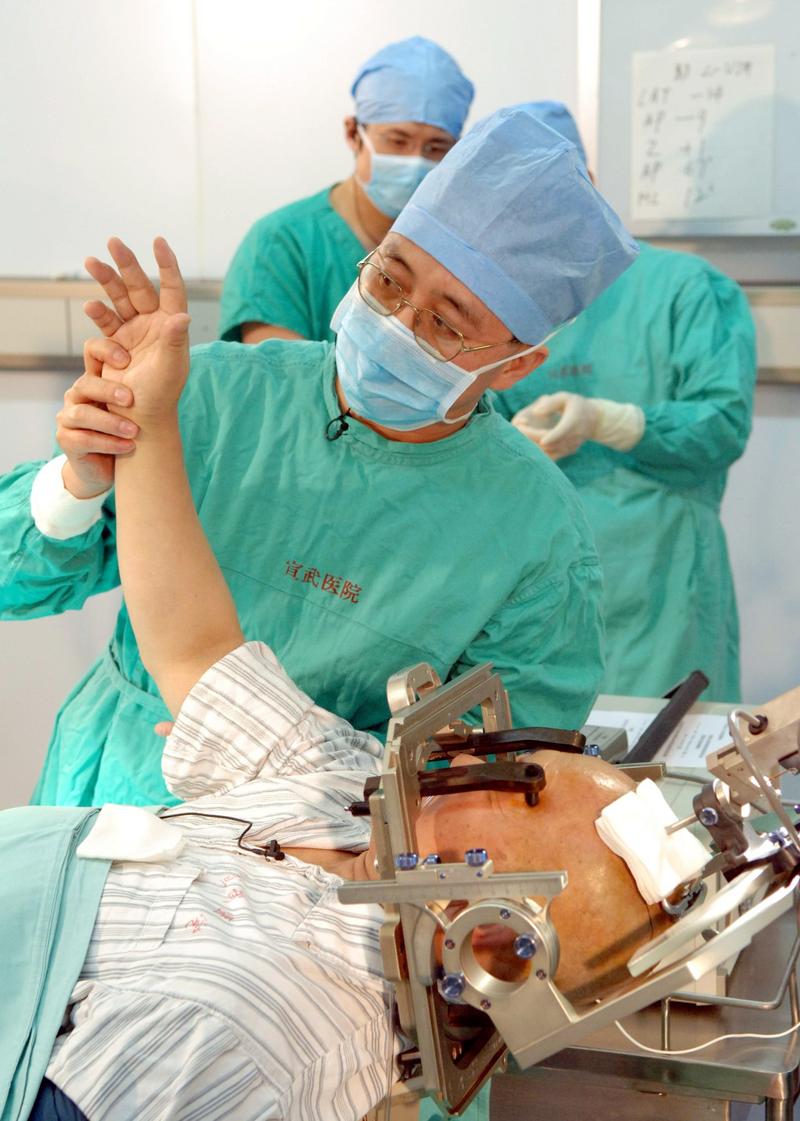 Li talks with a man who has Parkinson’s disease during surgery. (PHOTO PROVIDED TO CHINA DAILY)

In 1996, he joined the medical center at Loma Linda University in California, a leader in the stereotactic field. After more than two years, he finished his apprenticeship and also received his green card.

But rather than continue his successful life in the US, Li made an unusual decision - to return to China.

Work and living conditions in China lagged far behind developed countries in the 1990s.

More than 70 percent of Li's classmates from Peking University had gone abroad, but only two returned.

"I had no hesitation, as I preferred challenges. In the United States, I could foresee my life after retirement," Li said. "I would have regretted missing all the changes in China, which was developing at such a great speed."

Under Li's direction, Xuanwu Hospital opened the Beijing Institute of Functional Neurosurgery in 1998. The institute has now treated more than 100,000 patients and performed more than 20,000 operations.

Li is always considering new technologies. Stereotactic surgery has been mostly replaced by deep brain stimulation, a new method to treat movement and neuropsychiatric disorders by sending electrical pulses to targets in the brain through implanted electrodes.

For 10 successive years, the institute has ranked first in the world in the number of implanted neurostimulators

"Whenever we treat a new disease, I do all the research work and carry out the operations at the initial stage. But after the surgical program is established and effective, I pass it over to my colleagues and students," he said.

He always shares his knowledge and experience. The institute has held 16 training sessions, attended by thousands of doctors from all over the country.

"Li takes the lessons every time, and many of the trainees have gone on to become pillars of their provincial-or city-level hospitals," said Lu Xiaoli, one of Li's colleagues.

Now he wants to accelerate this progress. In the preface to his book Functional Neurosurgery, which was published this year, he estimated that more than 5 million neurological patients in China could benefit from proper and timely surgery.

"Such huge potential demand for medical services cannot be ignored, and neither can the historic opportunity to propel the discipline be missed," he wrote.

Li is now researching noninvasive surgery, and is even considering the utilization of artificial intelligence.

"A human brain has 60 to 70 billion cells. If each cell were a star, the brain would be as infinite as the universe," he said.

"I would like to take more adventures in it."

Xia Ke contributed to this story.