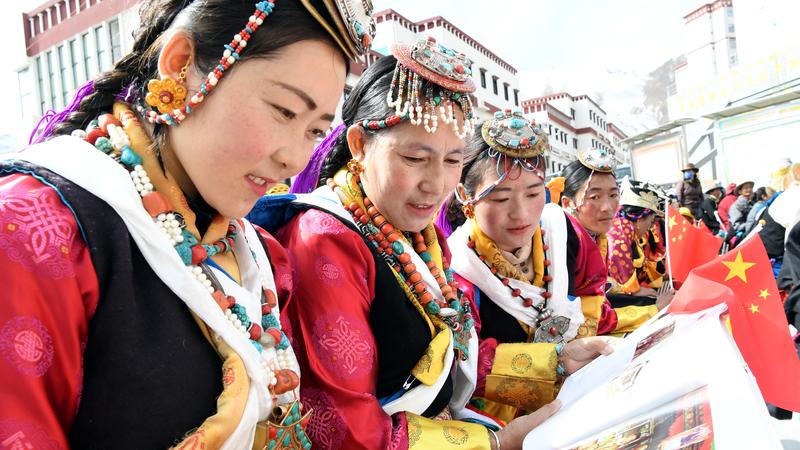 Tibet residents peruse a book of group portraits of 100 of the autonomous region's families going back four generations. The book was unveiled on Wednesday in Lhasa. (LOBSANG / FOR CHINA DAILY)

Apart from social and economic development, the human rights situation in the Tibet autonomous region has also been significantly improved since democratic reform took place in the region in 1959, a senior official from Tibet said on Wednesday.

Sixty years ago, serfs and slaves did not even have the right to subsistence, let alone the right to pursue their development, Norbu Dondrup, vice-chairman of the region, said at a news conference in Beijing.

A white paper, Democratic Reform in Tibet－Sixty Years On, was also released on Wednesday by the State Council Information Office.

Before 1959, Tibet had been a society of feudal serfdom under theocratic rule for centuries. Millions of serfs and slaves were subject to cruel exploitation and oppression. By abolishing serfdom, Tibet was able to establish a new social system that liberated the people and made them the masters of the nation and society, ensuring their rights in all matters, the document said.

Norbu Dondrup said the 14th Dalai Lama's attack on the human rights situation in today's Tibet has ulterior motives. "As for some countries criticizing our human rights, they either don't know the real situation or believe the rumors from the Dalai clique," he said.

Even as they were aware that feudal serfdom under theocracy was coming to an end, the 14th Dalai Lama and the reactionaries in Tibet's upper class－officials, aristocrats and high-ranked lamas in monasteries－had no desire for reform, the white paper said.

Instead, they tried to maintain the system for fear that reform would deprive them of their political and religious privileges, together with their huge economic benefits, it said.

On March 10, 1959, some members of the ruling class staged an armed rebellion in an attempt to perpetuate theocratic feudal serfdom. The rebellion triggered the start of democratic reform. After the rebellion had been foiled, the 14th Dalai Lama soon fled to India.

"The so-called government-in-exile set up by the Dalai clique is illegal and invalid. It is not recognized by any country in the world," Norbu Dondrup said, adding that Tibet has always been an inseparable part of China.

Tibetan people can now enjoy good healthcare services, which were exclusively provided to the upper class before democratic reform. Their average life expectancy has increased to 68.2 years from 35.5 in 1959, Ren Jingdong, deputy director of the regional development and reform commission, said at the news conference.