For Palestinians, US Embassy move a show of pro-Israel bias 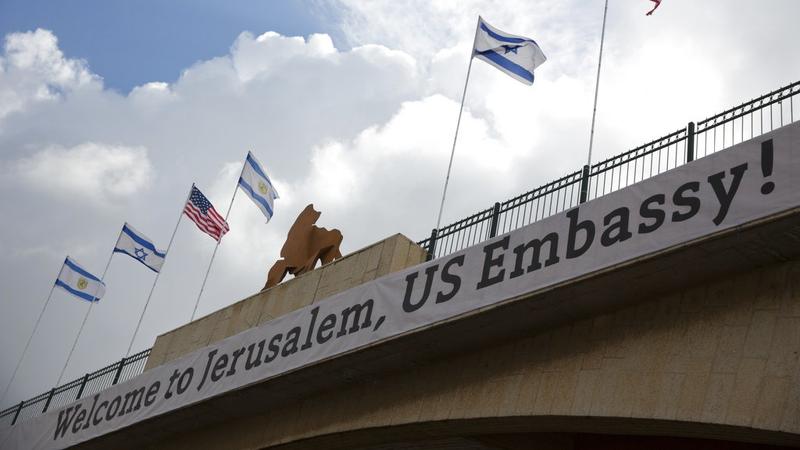 A sign on a bridge leading to the US Embassy compound ahead the official opening in Jerusalem, May 13, 2018. May 14, 2018's opening of the US Embassy in contested Jerusalem, cheered by Israelis as a historic validation, is seen by Palestinians as an in-your-face affirmation of pro-Israel bias by President Donald Trump and a new blow to frail statehood dreams. (ARIEL SCHALIT / AP)

JERUSALEM — Monday's opening of the US Embassy in contested Jerusalem, cheered by Israelis as a historic validation, is seen by Palestinians as an in-your-face affirmation of pro-Israel bias by President Donald Trump and a new blow to dreams of statehood.

The festive inauguration helps harden Palestinian President Mahmoud Abbas' rejection of Washington as a future mediator in the conflict with Israel, likely ushering in a prolonged period of diplomatic vacuum in which other powers are unwilling or unable to step up as brokers.

Such paralysis and loss of hope have been major drivers of Palestinian unrest.

Underscoring the conflict's volatility, thousands of Gaza residents plan to march Monday toward Israel's border and possibly breach it in an attempt to break a decade-old blockade of their territory. Israel has vowed to stop any breach by force, raising the possibility of major bloodshed at a time when Trump's daughter Ivanka and son-in-law Jared Kushner preside over the embassy ceremony just 70 kilometers  away.

READ MORE: Israel prepares for opening of US embassy in Jerusalem

From Tel Aviv to Jerusalem

Tel Aviv is the customary base for foreign embassies in Israel, with the US and other countries having avoided Jerusalem because of its contested status. Over the years, a few countries set up embassies in Jerusalem and then left it again. From 2006 until this week, the city didn't host a single foreign embassy.

Israel captured east Jerusalem, along with the West Bank and Gaza Strip, in the 1967 Mideast war. It annexed the eastern sector to its previously declared capital in the western part of the city, a move not recognized at the time by the US and most other nations.

The fate of the city has been a central issue in years of intermittent US-brokered negotiations. Israeli Prime Minister Benjamin Netanyahu, taking a harder line than two predecessors, has said he won't give up any part of Jerusalem, home to 883,000 people, 38 percent of them Palestinians. Abbas wants east Jerusalem to be the capital of a Palestinian state that would include the other war-won territories. 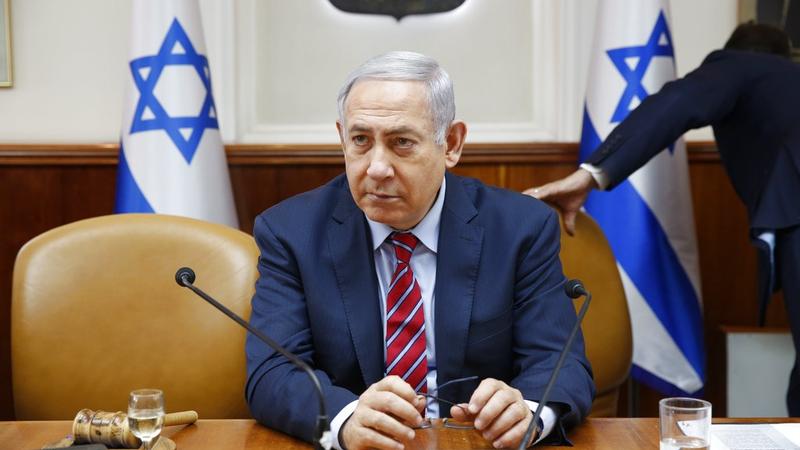 In December, Trump recognized Jerusalem as Israel's capital, saying he was simply acknowledging reality, while omitting any mention of Palestinian claims to the city. Trump said at the time he is not taking a position on the boundaries of Israeli sovereignty that are to be determined in negotiations. But just a month later Trump told Netanyahu he had taken Jerusalem "off the table" and that "we don't have to talk about it anymore."Abbas, who for years had banked on the US to persuade Israel to cede land for a Palestinian state, felt betrayed and halted contacts with the Trump administration.

No to Kushner's deal

Abbas recently laid out conditions for coming back to the table that — based on Trump's past statements — seem unlikely to be met. Abbas says the US must explicitly support a two-state solution, recognize east Jerusalem in principle as a Palestinian capital and allow other powers to join as mediators.

In the meantime, Abbas vows to reject any US proposal for an Israeli-Palestinian agreement, arguing that there's nothing to talk about because of the US policy shift on Jerusalem and its failure to rein in Israeli settlement expansion on lands sought for a Palestinian state.

"We will not accept the deal," Abbas told a PLO convention two weeks ago, referring to the plan reportedly being prepared by Trump's Kushner-led Mideast team.

It's unclear when or if the US plan will be released. No details of the proposal have been confirmed, though Palestinian officials, citing information from Saudi intermediaries, suspect it's an offer for a Gaza-based mini-state with parts of the West Bank and a small foothold in Jerusalem.

Abbas, a staunch opponent of violence, hasn't offered an alternative to statehood through negotiations with Israel or found a world power willing to challenge Washington. 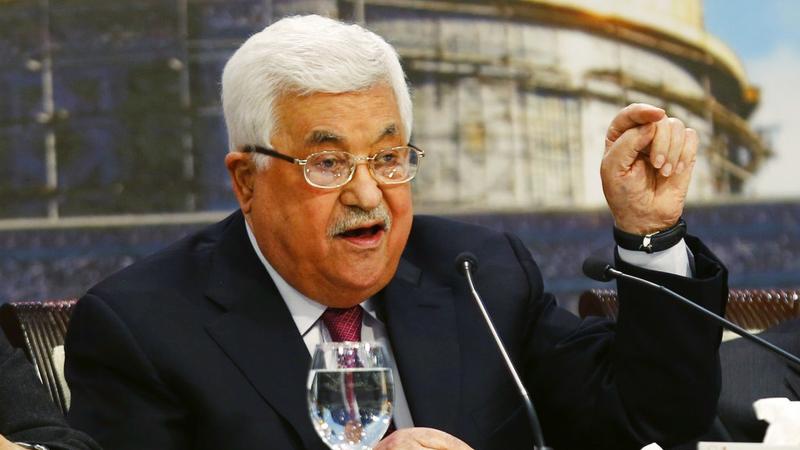 Palestinian President Mahmoud Abbas speaks during a meeting of the Palestinian National Council at his headquarters in the West Bank city of Ramallah, April 30, 2018. (MAJDI MOHAMMED / AP)

European foreign ministers, while opposed to the US policy shift, have urged Abbas to give Washington's peace plan a chance. Even European criticism of the US Embassy move will likely be diluted, with Hungary, the Czech Republic and Romania reportedly having blocked a joint EU statement on the issue.

Monday is bound to be one of the worst days in office for Abbas since the Islamic militant Hamas seized Gaza in a 2007 takeover. The 83-year-old appears politically weak and out of ideas, at a time when Hamas is seen as taking charge by leading mass protests against Israel.

Abbas is also increasingly at odds with his own public, especially the younger generation, where support for establishing a Palestinian state alongside Israel — the solution backed by the international community — is steadily declining because of growing disillusionment.

Only 35 percent of those between the ages of 18 and 22 still favor a two-state solution, compared to almost 60 percent in the 40-49 bracket, said pollster Khalil Shikaki, whose surveys have an error margin of 3 percentage points. Among the young, almost one-third support the idea of equal rights for Arabs and Jews in a single state, while 58 percent — the highest result in any age group — demand a return to an armed uprising.

Moving the US Embassy to Jerusalem has enjoyed bi-partisan support in Congress, as expressed in the 1995 bill requiring its relocation, though until now presidents used a waiver every six months allowing them to put off the move on security grounds. 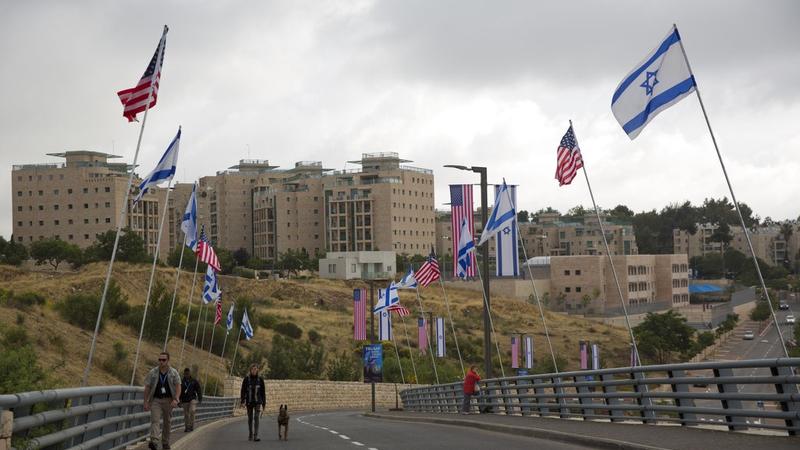 Security officers walk on a road leading to the US Embassy compound ahead the official opening in Jerusalem, May 13, 2018. (ARIEL SCHALIT / AP)

It would be politically difficult for any Trump successor to move the embassy back to Tel Aviv, though the next administration could theoretically still try to broker talks on the future of Jerusalem, said Nathan Thrall of the International Crisis Group think tank.

Yet the partition option may no longer exist a few years from now as settlements expand. Some 600,000 Israelis already live on war-won lands, including several tens of thousands in the West Bank's heartland, east of the Israeli separation barrier.

Veteran Palestinian negotiator Nabil Shaath thinks there's still hope, citing long-term trends he believes favor the Palestinians, including growing disagreements between the Trump administration and traditional US allies, and demographic pressure on Israel as the numbers of Arabs and Jews in the Holy Land approach parity.

He hopes for a change of direction by Washington, particularly if Republicans suffer a setback in November's midterm elections. "Rejecting Trump's policy and afterward rejecting Trump himself would open the door for change," Shaath told reporters as he led a field trip to the embassy site last week.

As their bus drove past the compound, the journalists took photos of workers planting flowers in the area and paired Israeli and American flags fluttering from electricity poles.