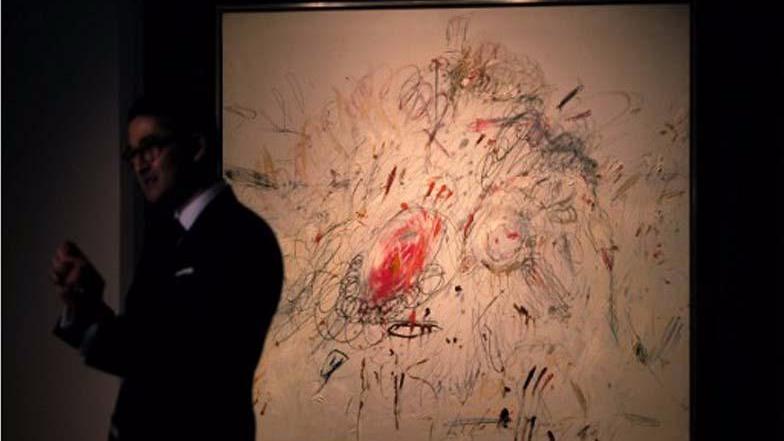 NEW YORK - Works by Francis Bacon and Cy Twombly, each sold for more than US$50 million at Christie's on Wednesday, helped drive a US$448 million sale of contemporary art that met expectations in an uncertain market.

The auction marked the second solid result this week for Christie's, which on Monday sold US$289 million in Impressionist and modern art, helping reassure a jittery market following recent seasons where owners were reluctant to open their vaults and consign top-tier works.

Of the 71 lots on offer virtually all found buyers, with only three going unsold. The sale's total nipped at the high pre-sale estimate of US$463 million.

Officials called the result robust, and provided evidence of "the great results you get for exceptional masterpieces," as Christie's global president Jussi Pylkkanen, who also served as auctioneer, put it.

Pylkkanen reiterated the contention from officials at both Christie's and rival Sotheby's that works fresh to the market and of the highest quality achieved the strongest prices, adding another factor - "demand is effectively outstripping supply."

Bidding at the sale, which was marked by strong American bidding and buying, was solid, if measured, short of the free-wheeling spending that marked sales from roughly 2011 to 2015, which saw spiking prices and nearly continuous record breaking.

The sale's top lot was Cy Twombly's Leda and the Swan, which sold for US$52.9 million, including commission of just over 12 percent, against an estimate of US$35 million to US$55 million.

Francis Bacon's Three Studies for a Portrait of George Dyer, a 1963 triptych, fetched US$51.8 million, at the very lowest end of its US$50 million to US$70 million estimate.

"It was what the market wanted to pay," Pylkkanen said.

Other highlights included Jean-Michel Basquiat's La Hara, which handily beat the high estimate of US$28 million to sell for just under US$35 million.

Works by pop artists Andy Warhol - one of his iconic Campbell's soup cans - and Roy Lichtenstein, each estimated to fetch US$25 million to US$35 million, achieved US$27.5 million and US$28.2 million, respectively.

Another Warhol, Last Supper, soared to US$18.7 million, more than double the US$8 million high estimate.

The auctions wrap up on Thursday with Sotheby's contemporary sale, featuring Jean-Michel Basquiat's untitled work from 1982, last auctioned in 1984 for a mere US$19,000 but now expected to reap more than US$60 million, setting it up to break the artist's US$57.3 million record set just a year ago.