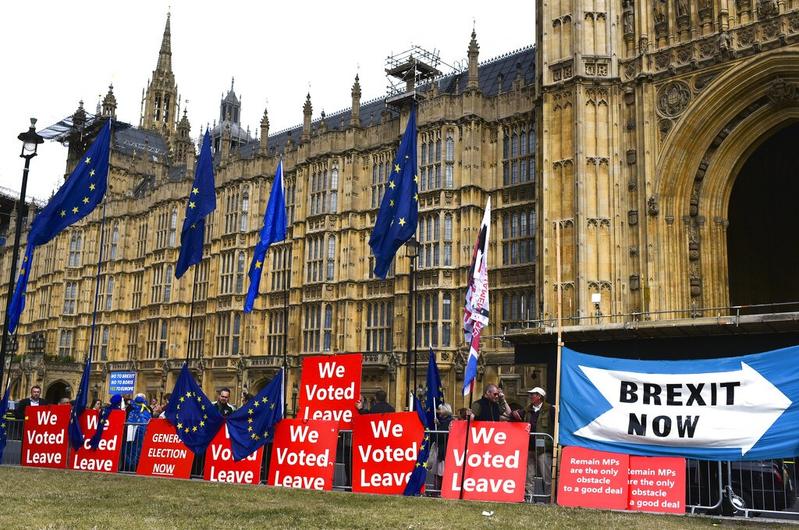 Pro Brexit placards and EU flags are pictured outside the Houses of Parliament, in London, Sept 5, 2019. (ALBERTO PEZZALI / AP)

LONDON — British Prime Minister Boris Johnson said on Friday he was not willing to contemplate resigning.

"I'll go to Brussels, I'll get a deal and we'll make sure we come out on October 31, that's what we've got to do," Johnson said.

When asked if he would resign if he could not deliver that, he said: "That is not a hypothesis I'm willing to contemplate."

I'll go to Brussels, I'll get a deal and we'll make sure we come out on October 31, that's what we've got to do.

After a turbulent week in British politics, opposition parties were grappling Friday with a big decision: whether to back Boris Johnson's call for an election, or try to put more pressure on the embattled prime minister first.

Jeremy Corbyn, who heads the main opposition Labour Party, was holding talks with other party leaders about a vote scheduled for next week in Parliament on calling an October election.

Johnson has lost one such vote but plans to try again Monday, saying an election is the only way to break the country's deadlock over Brexit.

But the opposition wants to be sure that Johnson — who says he would "rather be dead in a ditch" than delay Brexit — can't take Britain out of the European Union on Oct 31 without a divorce agreement. 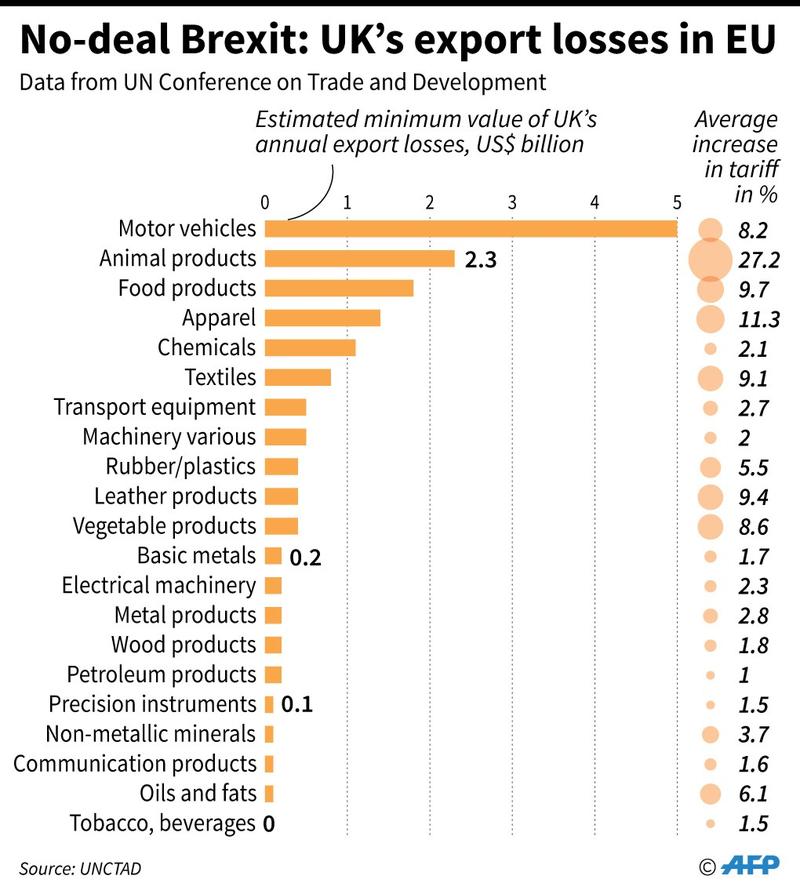 Chart showing the estimated minimum value of UK export losses in European Union markets and average tariff increases in case of a no-deal Brexit, according to the UN Conference on Trade and Development. (GRAPHIC / AFP)

Parliament is in the midst of passing an opposition-backed law that would compel the Conservative government to seek a Brexit postponement if no deal is agreed by late October. The bill is likely to become law Monday, and many pro-EU lawmakers want to hold off on triggering an election until it is set in stone, fearing Johnson will try to wriggle out of the commitment.

Labour foreign affairs spokeswoman Emily Thornberry said Johnson was "as slippery as can be" and could not be trusted.

Johnson's spokeswoman said British lawmakers should consider whether they will face up to a national election after they passed legislation to force the prime minister to seek a Brexit postponement and frustrate his plans for an Oct 31 departure.

"Members of Parliament should consider over the weekend whether they are prepared to face up to the consequences of their actions from this week in passing a bill that wrecks our negotiations," the spokeswoman said.

"They must take responsibility for their actions and face the general public in an election."

Johnson's push to leave the EU by Halloween, with or without a divorce deal to smooth the way, is facing stiff opposition, both in Parliament and in the courts.

On Friday, Britain's High Court rejected a claim that Johnson is acting unlawfully in suspending Parliament for several weeks ahead of the country's scheduled departure from the EU.

Johnson enraged his opponents by announcing he would send lawmakers home at some point next week until Oct 14, just over two weeks before Britain is due to leave the EU. Critics accused him of subverting democracy and carrying out a "coup."

Transparency campaigner Gina Miller took the government to court, arguing the suspension was an "unlawful abuse of power."

A panel of three High Court judges ruled against her, but said the case can be appealed to the Supreme Court, which has set a hearing for Sept 17.

Outside court, Miller said she was disappointed with the ruling but "pleased that the judges have given us permission to appeal to the Supreme Court."

"To give up now would be a dereliction of our responsibility," she said. "We need to protect our institutions. It is not right that they should be shut down or bullied, especially at this momentous time in our history."