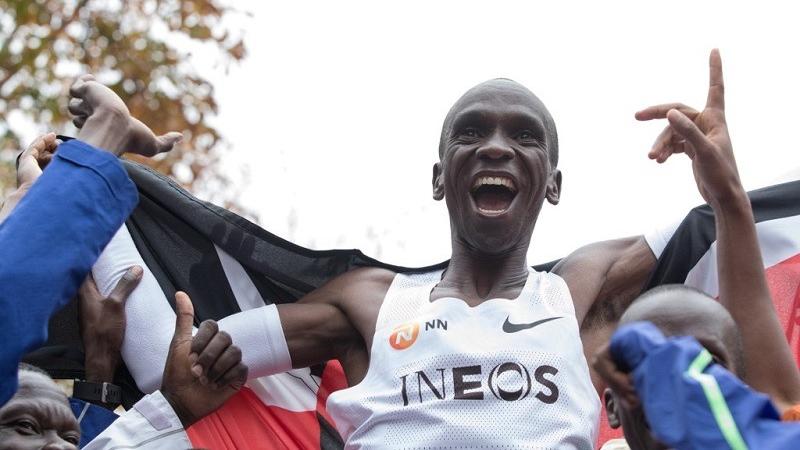 Kenya's Eliud Kipchoge (white jersey) celebrates after crossing the finish line at the end of his attempt to bust the mythical two-hour barrier for the marathon on October 12 2019 in Vienna. Kipchoge holds the men's world record for the distance with a time of 2hr 01min 39sec, which he set in the flat Berlin marathon on Sept 16, 2018. (ALEX HALADA / AFP)

NAIROBI - He is the man of the moment in Kenya and indeed the entire world but true to his character, Olympic champion Eliud Kipchoge, 'snuck' back to his homeland in the early hours Wednesday, side-stepping what would have been a roaring and frenzied welcome.

On Oct 12, the world marathon record holder became the first man to run the distance in under two hours when he stopped the clock in 1:59:40.2 in an event dubbed INEOS 1:59, financed by British billionaire Jim Ratcliffe, owner of the chemical giant INEOS.

"Honored to fly our champion @eliudkipchoge home from Amsterdam. The Pride is so proud of you! #ChampionOnBoard #NoHumanIsLimited," national carrier, Kenya Airways tweeted on Wednesday confirming that the athlete widely acknowledged as the Greatest Of All Time marathoner was indeed back home.

ALSO READ: Kipchoge first under 2 hours for marathon but no record

His arrival was in sharp contrast to his departure for Vienna, Austria where he achieved the feat dubbed as a moon-landing moment for sport last week when INEOS sent a private jet to fly him from his native Eldoret through Nairobi and Alexandria.

Local and international media based in Nairobi were eagerly anticipating a return fit for a king but once again, the four-time London and three-time Berlin marathon winner stuck to his humble nature and slipped back home as quietly as he has always done.

"Kenya's world record holder Eliud Kipchoge sneaked back into the country quietly early Wednesday morning following his history exploits on Saturday in Vienna," the Daily Nation reported on their website under an article titled 'Eliud Kipchoge sneaks back quietly after historic feat.'

Local rival daily, The Standard went with 'Eliud Kipchoge makes quiet entry back home' as their banner stating, "Eliud Kipchoge is back in the country after his astonishing feat in Vienna, Austria, where he completed the marathon in under two hours. Many Kenyans were eagerly waiting for a publicized return but it seems the athlete preferred to keep it low key."

Another Kenyan newspaper, The Star, adopted a measured tone publishing, "World record holder Eliud Kipchoge is back in Eldoret, Kenya, after a good run in Vienna beating the two-hour barrierKenya Airways took to Twitter on Wednesday to express its pride in flying the marathoner to home." 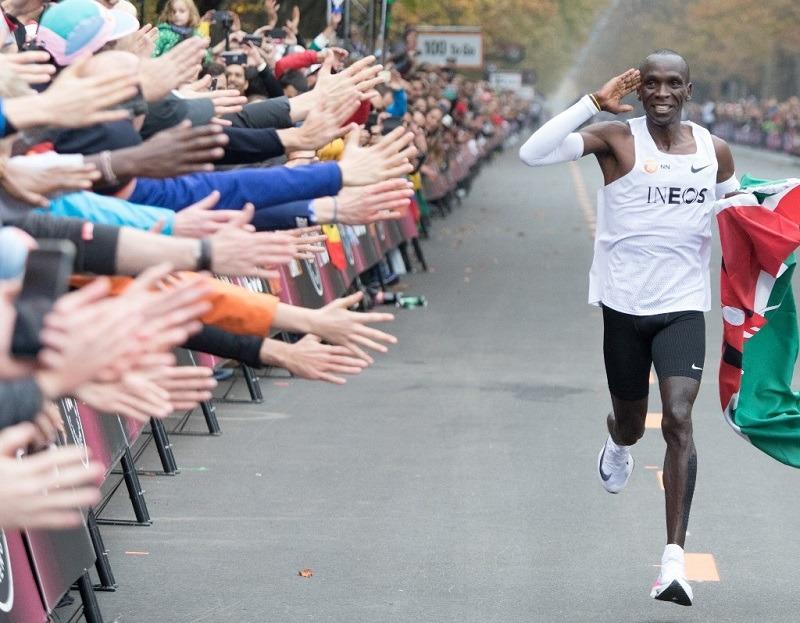 Kenya's Eliud Kipchoge (white jersey) celebrates after crossing the finish line at the end of his attempt to bust the mythical two-hour barrier for the marathon on Oct 12 2019 in Vienna. (ALEX HALADA / AFP)

His arrival, known only to his trusted inner circle, caught the waiting press unawares once again, following similar low key returns from his previous notable marathon conquests in Rio 2016 where he won the Olympic title and Berlin 2019 where he ran the 2:01:39 world record.

Those who know the 34-year-old, transitioned to the marathon after the disappointment of missing a place in the Kenyan men's 5000m and 10000m teams for the London 2012 Olympics are cognizant of the fact that despite his global superstardom, Kipchoge never veers away from his calmness, consistency, patience and discipline.

"Once you cross the line, that is in the past and its time to change focus to what lies ahead," the philosophical athlete explained to this writer when asked why he did not go all out like some of his peers to organize a huge celebration following his record run in Berlin last year.

Kipchoge's astonishing performance in Vienna has jolted the corporate world in Kenya to life, with companies queuing up for a piece of his pie in a country where many sporting institutions are sagging under the weight of poor financing.

Kenya Airways, for example, are mulling on naming the aircraft that brought him home after the marathon superstar while at the peak of the craze, others like a low budget carrier JamboJet and alcohol manufacturer East Africa Breweries were among an assorted list that offered discounted products priced with the magical 159.

Prior to his departure for Austria, telecom operator Safaricom and General Motors East Africa through their Isuzu brand were the only known local companies with working partnerships with the Olympic gold winner.

Safaricom turned the logo of their pioneering mobile money transfer service, M-Pesa to Eliud 159 emoji in conjunction with Twitter as they milked the bewildering online traction the INEOS 159 Challenge created on social media that peaked at 11 billion impressions according to gadgets Africa.

While the two had the right to use his image in promotional material, others jumped into the Kipchoge bandwagon exposing them to legal action from his team for the unauthorized use of his photos.

A local TV station was forced to hammer an out of court settlement with the marathon star after they ran an advert with his image from a corporate client following his Olympics success to leverage on his soaring popularity without seeking clearance from his representatives.

As the dust goes down on INEOS 159, one can expect similar lawsuits as corporate Kenya that is traditionally seen to be averse to involvement in sports reel from a missed a golden opportunity to put their brands to the light.