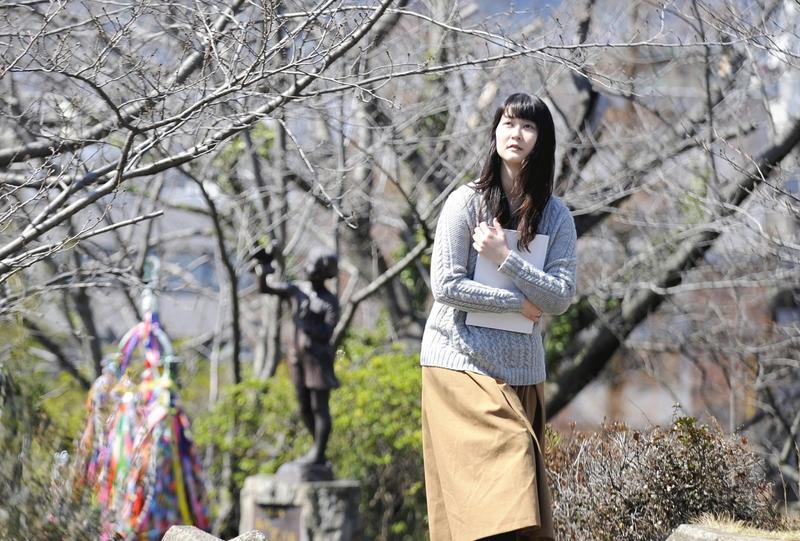 Nana Sato, a graduate of a postgraduate program in nursing, works as a nurse in Nagasaki, Japan. (PHOTO / THE JAPAN NEWS)

NAGASAKI — Having completed her postgraduate studies in Nagasaki, Nana Sato started working as a nurse in a hospital in the city in April with a firm goal in mind. As a native of Fukushima prefecture, she wants to help people who have suffered from prejudice and misinformation about radiation exposure.

“I want to make sure no one goes through the same agony that I did,” said the 24-year-old Sato, who participated in a ceremony on March 25 to mark the completion of her postgraduate program and has landed a job at Nagasaki University Hospital.

Sato, from the city of Iwaki, completed a two-year master’s course in nursing as part of a postgraduate medical science program jointly organized by Nagasaki University and Fukushima Medical University.

By using my newly learned knowledge, I want to help people hurt by prejudice and groundless rumors

Sato encountered prejudice herself from mistaken notions and rumors about radioactivity, which spread following the 2011 nuclear accident at the Fukushima No. 1 nuclear power plant run by Tokyo Electric Power Company Holdings Inc.

The Great East Japan Earthquake hit when Sato was a first-year high school student. When it was revealed that the nuclear power station about 35 kilometers from her house was emitting radiation, Sato and her younger sister evacuated to a relative’s home in Nagoya for about a month.

After finishing high school, and hoping to follow in her mother’s footsteps as a nurse, Sato entered a nursing college in a different prefecture. With no end to the nuclear tragedy in sight, Sato heard of news reports about discriminatory remarks being aimed at people affected by the nuclear accident around the country.

“So when anybody asked [where I was from], I only said ‘Tohoku,’” Sato said referring to the region that includes Fukushima. “I was afraid of discrimination.”

However, she found she could not completely steer clear of the bias. In her second year of college, one lecturer said during a lesson, “You shouldn’t go to Fukushima.” Sato was the only one in the class from the prefecture, and at that moment, she felt as if all eyes in the room were focused on her.

Another day, she felt unwell and went to the college health center, only for a school employee to suggest that her condition may be because she came from Fukushima prefecture. She was not only deeply hurt by this, but also realized that she did not have the facts to offer a rebuttal of such notions.

In the summer of her third year in college, she learned that a joint graduate school would be established to train medical doctors and nurses capable of responding to complex disasters that involve radiation exposure. Upon graduating, Sato went to the graduate school’s Nagasaki campus in fiscal 2017, when she began her studies to gain expertise in radiological nursing.

The atomic-bombed city of Nagasaki has long emphasized the horrors of radiation exposure, and Sato found support from many people she met there. Professors at the graduate school and Nagasaki prefectural government employees who had been dispatched to Fukushima prefecture to aid in post-quake reconstruction, among others, did not see Sato as different. “Fukushima is a good place,” and “The food there is great,” they would say.

As part of her practical training, Sato visited a home in Nagasaki for elderly victims of the atomic bombing. She heard their tales of discrimination throughout the years following the end of World War II. It gave her renewed commitment to her work.

Sato said, “By using my newly learned knowledge, I want to help people hurt by prejudice and groundless rumors.”