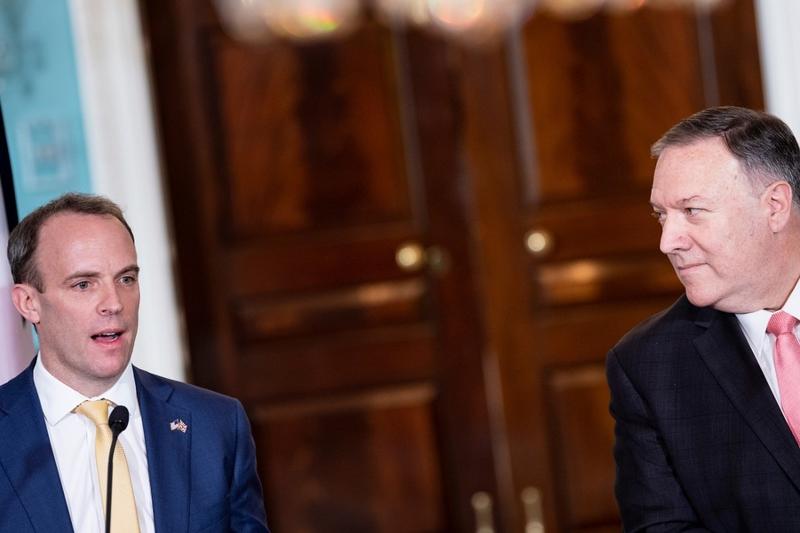 British Foreign Secretary Dominic Raab (left) and US Secretary of State Mike Pompeo speak to reporters during a press conference at the US Department of State on Aug 7, 2019, in Washington, DC. (BRENDAN SMIALOWSKI / AFP)

WASHINGTON — US Secretary of State Mike Pompeo said Wednesday that the missile launches by the Democratic People's Republic of Korea (DPRK) would not dampen the environment for negotiations on denuclearization.

The US objective of denuclearization of the DPRK has not changed

Mike Pompeo, US secretary of state

Pompeo made the remarks during his joint press conference with visiting British Foreign Secretary Dominic Raab, highlighting Pyongyang's moratorium on nuclear and long-range missile launches, which he called as "good things."

"We are hopeful that in the coming weeks we'll get back to the negotiating table to achieve that," said the US top diplomat, adding that the US objective of denuclearization of the DPRK has not changed.

Kim Jong-un, top leader of the DPRK, watched the demonstration launching of new-type tactical guided missiles at daybreak Tuesday, sending an adequate warning to the US and the Republic of Korea (ROK) that is currently holding a joint military drill, the official Korean Central News Agency reported Wednesday.

Tuesday's launch was the fourth of its kind by the DPRK in less than two weeks.