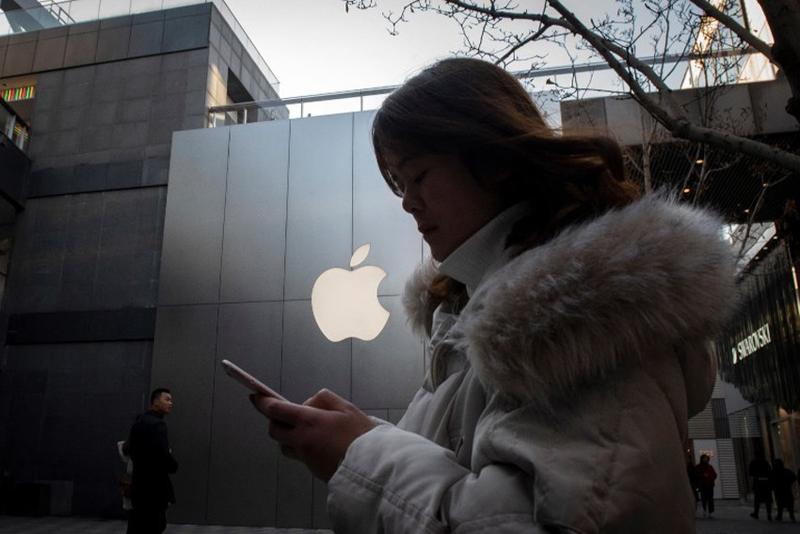 A Chinese woman uses an iPhone outside an Apple store in Beijing, Jan 4, 2019. Apple cut its revenue outlook for the latest quarter on January 3, citing steeper-than-expected "economic deceleration" in China and emerging markets. iPhone shipments to China plunged 22 percent in 2018 on a yearly basis, according to a report by market researcher Strategy Analytics. (NICOLAS ASFOURI / AFP)

NEW YORK – Apple's iPhone shipments in China plunged 22 percent in the final quarter of 2018 as the US-based tech giant struggles in the world's largest smartphone market.

Market researcher Strategy Analytics on Thursday released a report on the smartphone shipment in China in the last quarter of 2018, saying Apple replaced Xiaomi and became the fourth largest smartphone maker in China with 10-percent market share.

Apple encountered headwinds in the Chinese market over the past few years as local smartphone markers including Huawei, OPPO, Vivo, and Xiaomi expanded vigorously

Apple encountered headwinds in the Chinese market over the past few years as local smartphone markers including Huawei, OPPO, Vivo, and Xiaomi expanded vigorously with fine quality, reasonable prices and extensive retail channels.

Ongoing patent litigation between Apple and Qualcomm as well as criticism on Apple's increasingly high product price have been weakening the tech giant's competitiveness in China.

Meanwhile, "longer replacement cycles and weak consumer spending" are new norms confronting all smartphone makers in the country, according to Strategy Analytics.

Earlier this month, Apple CEO Tim Cook warned investors that partially due to unexpected sales shortfall of product portfolio in the Chinese market, it had to adjust down revenue forecast for the three months ending December 2018.

Apple's open letter triggered US equity market panic and pulled the Dow down by 2.8 percent, or 660.02 points, on the day's trading session.

Apple is to release the financial results for the quarter ending December 2018 next Tuesday. Over the past few weeks, analysts have cut their forecasts for iPhone sales, although Apple had said it would stop disclosing the number its iPhone sales and hoped investors to focus more on the revenue.