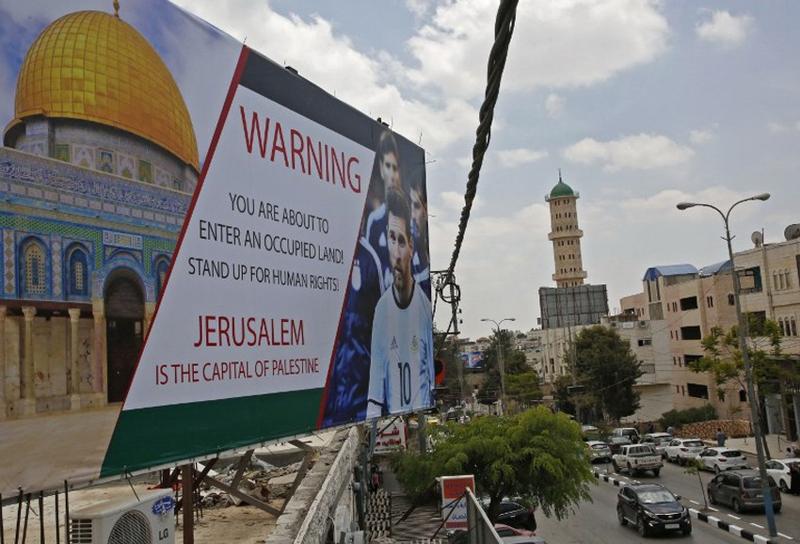 This June 5, 2018 picture shows a poster erected on a main street in the West Bank town of Hebron, denouncing a planned friendly football match between Argentina and Israel. (HAZEM BADER / AFP)

UNITED NATIONS — Israel has refused to allow the UN Security Council to visit the territory that the Palestinians claim for a future independent state, UN diplomats said Wednesday.

Palestinian Ambassador Riyad Mansour immediately responded, saying a council visit would be viewed "in the most positive way."

A council visit requires support from all 15 council members and approval by the countries concerned. Several other members confirmed Danon's rejection.

Al-Otaibi, the Arab representative on the council, said he expressed regret that the visit won't take place, noting there have been many requests for the UN's most powerful body to visit the West Bank, Gaza and east Jerusalem, which the Palestinians want as their capital — all unsuccessful.

UN deputy spokesman Farhan Haq said there is no record of the Security Council ever visiting Palestinian areas.

"We want to continue our consultation," Al-Otaibi said. "Hopefully we reach a consensus, because we said this issue has been on the council agenda for decades."

"We want an official trip — this is what we asked for, not to go illegally or not to be invited as tourists," Al-Otaibi said.

The Security Council asked the council president to meet the Israeli and Palestinian ambassadors to discuss a visit after the United States blocked an Arab-backed Security Council statement put forward by Indonesia and Kuwait expressing regret at Israel's suspension of an international observer mission in the West Bank city of Hebron.

The Temporary International Presence in Hebron was established in 1994 following Israeli settler Baruch Goldstein's massacre of 29 worshippers at the Ibrahimi Mosque in the West Bank city, which triggered riots across Palestinian areas. The mosque is located at the site that is also revered by Jews as the Tomb of the Patriarchs.

Israel's Danon accused the Hebron mission of acting as "a violent, biased" force, which its members strongly denied.