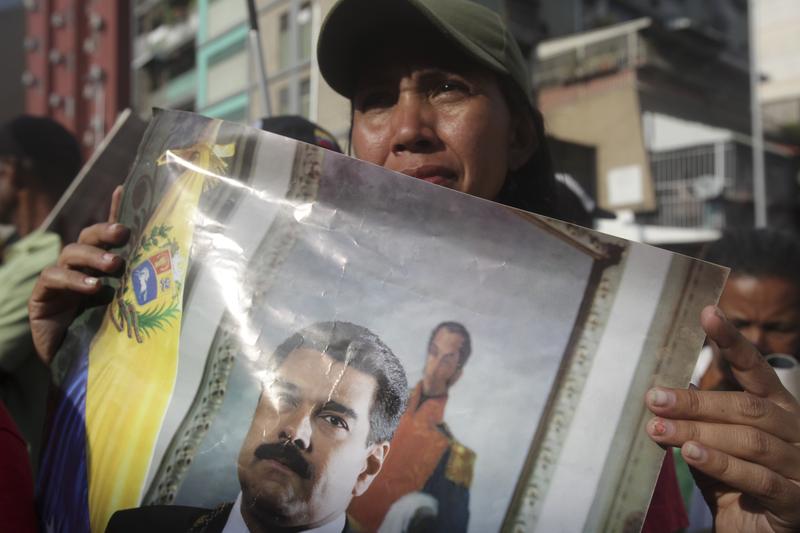 A supporter of Venezuela's President Nicolas Maduro holds a poster of him outside Miraflores presidential palace during an attempted military uprising in Caracas, Venezuela, April 30, 2019. (BORIS VERGARA / AP)

WASHINGTON—The war of words between Washington and Moscow escalated on Wednesday over the latest situation in Venezuela.

On Tuesday, Venezuelan opposition leader Juan Guaido, who had proclaimed himself as the interim president, reportedly called on the Venezuelan people and military to take to the streets to overthrow Venezuelan President Nicolas Maduro, which was later frustrated by security forces.

In a statement released on Wednesday afternoon, the White House said that the United States denounced Russia's "continued support" for the Maduro government.

The White House said that "the Trump Administration views interference from the Russian government and their support of the Maduro regime as extremely troublesome and unacceptable."

The statement read that "President Trump has made it clear to Russia that they must leave and renounce their support of the Maduro regime."

Earlier on Wednesday, US Secretary of State Mike Pompeo said that the United States will continue to raise cost for Russia over the behaviors on Venezuela-related issue.

In an interview with Fox Business Network, Pompeo said that "as the president said, they've got to go, and the Russians need to have the cost for that raised."

On the same day, Pompeo called his Russian counterpart Sergey Lavrov to discuss the Venezuela situation.

According to the State Department, Pompeo said during the phone call that the role of Russia in Venezuela is "destabilizing" for the nation and "for the US-Russia bilateral relationship."

For his part, Russian Foreign Minister Sergei Lavrov on Wednesday denounced Washington's support for the Venezuelan opposition in their attempt to seize power.

In the telephone conversation with Pompeo, Lavrov noted the latest situation in Venezuela where the opposition had tried to seize power with "obvious support" from the United States, according to a statement by the Russian Foreign Ministry.

"The Russian side stressed that Washington's interference in the internal affairs of a sovereign state and threat against its leadership is a gross violation of international law," the statement read.

READ MORE: US, Russia divided on Venezuela after talks in Rome

Lavrov said that only the Venezuelan people have the right to determine their destiny and that destructive external influence has nothing to do with a democratic process.

In a televised address on Tuesday night, Maduro called on other countries "which continue to support the coup opposition" to rectify their positions.

The United States has been pursuing a policy of economic sanctions and diplomatic isolation against the Venezuelan government in support of Guaido. It recognized Guaido as the nation's "interim president" on Jan 23, days after Maduro was inaugurated for a second term.