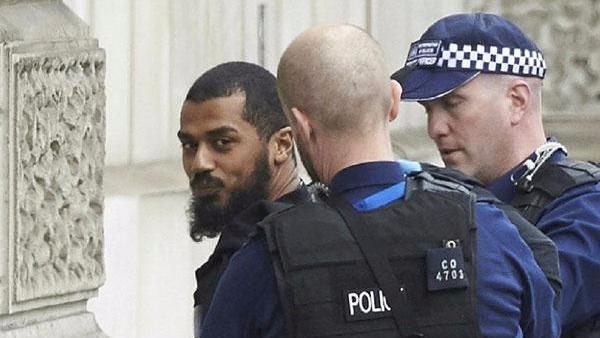 Firearms officers from the British police detain a man (left) on Whitehall near the Houses of Parliament in central London on April 27, 2017 before being taken away by police. (Niklas HALLE'N / AFP)

The 27-year-old man was detained by counter-terrorism officers on Parliament Street, a stone's throw from the parliament building, May's Downing Street office and government departments, during a stop-and-search in an ongoing security operation, police said.

A Western security source said the man, from London, was on the radar of counter-terrorism officers and the domestic intelligence agency MI5 before his arrest.

No one was injured in the incident, and May was not at Downing Street at the time because she was campaigning in northern England for a June 8 parliamentary election.

A source familiar with the investigation said the suspect had been arrested as part of an intelligence-led operation.

The knife incident came just over a month after a British-born convert to Islam ploughed a car into pedestrians on nearby Westminster Bridge, killing four people, before stabbing to death a police officer in the grounds of parliament. The man responsible, Khalid Masood, was shot dead at the scene.

That attack prompted police to review security around parliament and led to a greater visible armed police presence.

"Detectives from the Counter Terrorism Command are continuing their investigation, and as a result of this arrest there is no immediate known threat," police said in a statement about Thursday's incident.

"The man ... was arrested on suspicion of possession of an offensive weapon and on suspicion of the commission, preparation and instigation of acts of terrorism. Knives have been recovered from him."

The suspect may have had contacts with militants outside Britain and may have travelled to meet them, a source familiar with the investigation told Reuters. The source said investigators did not currently believe that the suspect had been in contact with Islamic State militants. 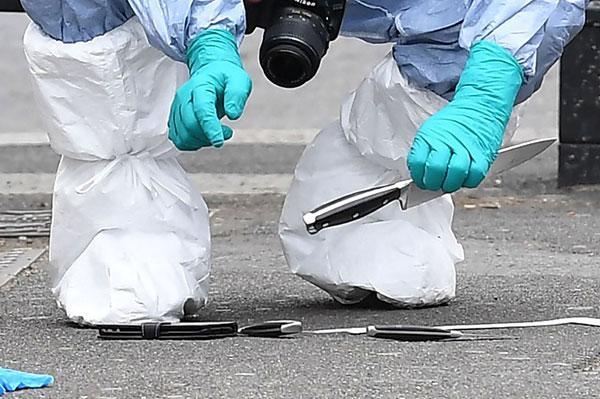 A British police forensics officer holds a knife as he collects evidence on Whitehall near the Houses of Parliament in central London on April 27, 2017, at the scene where a man was detained and taken away by police. Metropolitan police attended an incident on Whitehall in central London near the Houses of Parliament where one man was arrested. (Justin TALLIS / AFP)

A Reuters reporter and photographer saw police detaining a dark-skinned, bearded man dressed in a hooded, black coat. The man was stood between two armed police officers with his right hand in a loose bandage.

Dramatic pictures of the man's arrest on social media showed a large group of heavily armed officers surrounding the suspect, and the Reuters photographer saw three knives and a rucksack lying on the ground. Police said the suspect was being questioned at a south London police station.

Two hours after he was detained, police reopened streets in the Westminster district, indicating they saw no further public risk.

"Obviously I can't say much more about it because it is an ongoing police investigation but I think it shows that our police and our intelligence and security services are on the alert as they always are, looking to keep us safe and secure."

In a separate development, the Scottish parliament said on Thursday that three suspicious packages containing "white powder type substances" were sent to political offices between April 25 and 26.

Labour Party lawmaker Peter Hain, who represents an area in Wales, confirmed via text to Reuters a Guardian newspaper report that police were investigating a letter sent to him containing white powder. Police were not immediately available to comment.

Since August 2014, Britain has been on its second-highest alert level of "severe", meaning an attack by militants is considered highly likely.

Just weeks before Masood's attack in Westminster, London's counter-terrorism police chief said the security services had thwarted 13 terrorism attempts since May 2013, with hundreds of investigations ongoing at any time.

Although police said Masood had come to the attention of MI5 as a peripheral figure in an investigation into violent extremists, sources told Reuters he was probably a "lone wolf", self-radicalised by material on the internet.