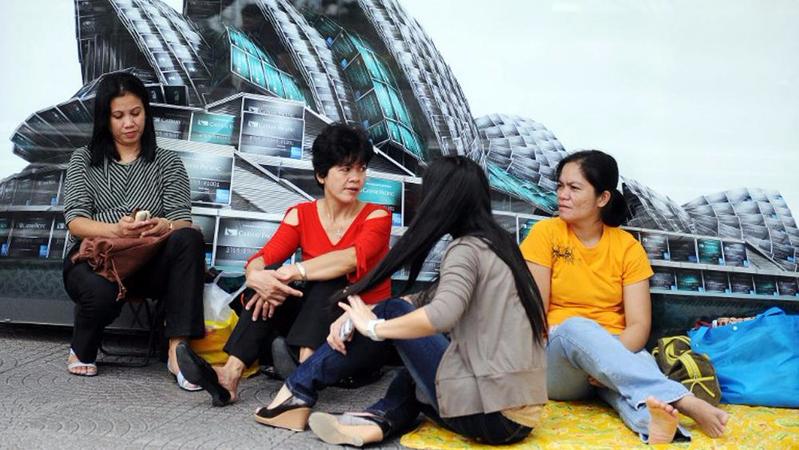 Foreign domestic workers chat in front of a financial advertisement poster in Hong Kong on Oct 12, 2008. Labor and welfare secretary of China's Hong Kong Special Administrative Region (HKSAR), Law Chi-kwong, said on Aug 10, 2017 that the HKSAR government has made every effort to protect the rights and welfare of domestic helpers. (LAURENT FIEVET / AFP)

PHNOM PENH – Law Chi-kwong, labor and welfare secretary of China's Hong Kong Special Administrative Region (SAR) government, said here on Thursday that the Hong Kong SAR government has made every effort to protect the rights and welfare of domestic helpers.

"We have been stepping up our measures in Hong Kong, trying to protect them, and particularly in terms of law enforcement," he said during a joint press conference after meeting with Cambodian Labor Minister Ith Samheng in Phnom Penh.

Law, who arrived in Cambodia on Wednesday for a three-day visit, said the Hong Kong authorities have worked closely with employment agencies and consulates general of respective countries to protect the domestic helpers and to educate them about their rights and welfare.

He said domestic helpers in Hong Kong can seek help from the Hong Kong SAR government, police or the consulate general of their country when they face any difficult situation.

Meanwhile, Law said his visit to Cambodia was to talk with the Cambodian labor minister and recruitment agency representatives about arrangements for Cambodian women to work in Hong Kong as domestic helpers.

"Through our discussion, the first group of Cambodian laborers will probably depart for Hong Kong in late 2017," he said during a joint press conference.