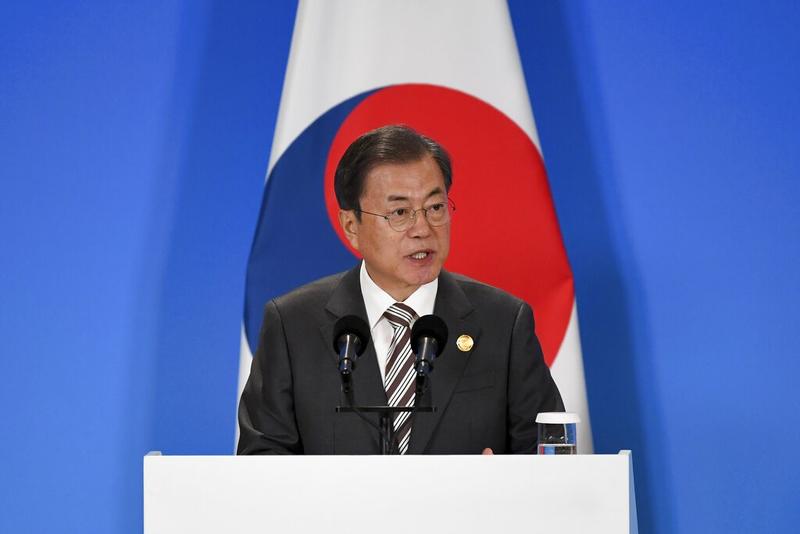 President of the Republic of Korea Moon Jae-in speaks during a joint press conference after the trilateral leaders' meeting between China, ROK and Japan in Chengdu, southwest China's Sichuan province, on Dec 24, 2019. (WANG ZHAO / POOL PHOTO VIA AP)

SEOUL - The Republic of Korea's (ROK) President Moon Jae-in vowed Thursday to build a peace community of co-existence and prosperity on the Korean Peninsula this year.

Moon made the remarks during a New Year's event at the headquarters in Seoul of the Korea Chamber of Commerce and Industry (KCCI), a major local business lobby group, according to the presidential Blue House.

Moon stressed that peace would not come without "action," pledging to continue efforts for a wider "room to maneuver" in relations between the two Koreas

"With our people's aspiration for peace on the Korean Peninsula, (the government) will build a peace community of co-existence and prosperity," said Moon.

Moon noted that the leaders of the Democratic People's Republic of Korea (DPRK) and the United States maintained their willingness for dialogue, while the ROK government gradually moved toward the peninsula peace last year in coordination with the international community.

He stressed that peace would not come without "action," pledging to continue efforts for a wider "room to maneuver" in relations between the two Koreas.

Regarding domestic affairs, Moon vowed a "clear change" this year in the ROK's society based on the reform of agencies of power and the building of a fair society.

In the ROK, the agencies of power refer to the prosecution service, the police, the state intelligence agency and the national tax service.

"No agency of power can stand above people," said Moon who pledged that he will never stop legal and institutional reforms until the power institutions gain the trust of people.

'No change' in ROK-US drills

Meanwhile, a ROK Defense Ministry's spokesperson said there is no change in the stance that annual ROK-US joint military drills will be carried out in an adjusted manner to support diplomatic efforts for the denuclearization of the Korean Peninsula.

Speaking at a press briefing Thursday, spokesperson Choi Hyun-soo said that the exercises will be conducted under close coordination between the two sides.

Asked about whether large-scale military drills will resume in the future, Choi noted that it remains to be seen how things go, declining to elaborate further.

The war games were replaced by a modified command post exercise, codenamed Dong Maeng, to back efforts for the complete denuclearization of and the permanent peace settlement on the Korean Peninsula.