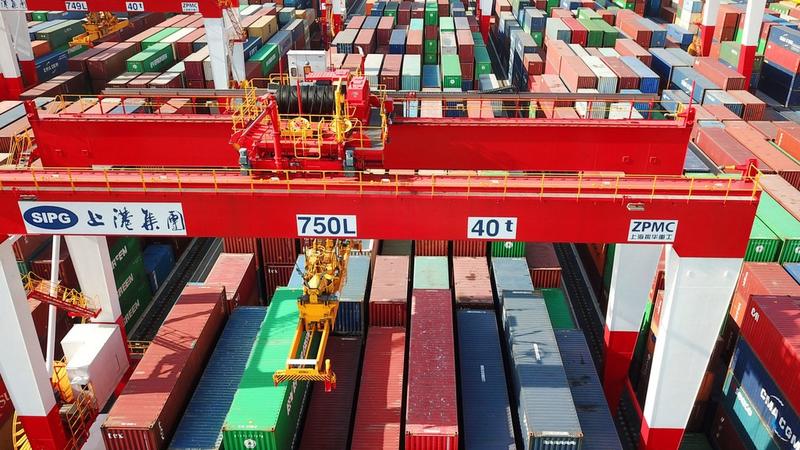 An aerial view of containers at the fourth phase of the Yangshan Deep-Water Port, the world's largest automated cargo terminal, in Shanghai, April 10, 2018. (PHOTO / IC)

The actual utilized value of foreign investment in China rose 7.2 percent from a year ago to reach 478.33 billion yuan during the January-June period, according to the Ministry of Commerce (MOC).

The actual utilized value of foreign investment in China rose 7.2 percent from a year ago to reach 478.33 billion yuan during the January-June period

In US dollar terms, the amount stood at 70.74 billion US dollars, up 3.5 percent year on year.

During the same period, a total of 20,131 new foreign-funded enterprises were established.

The reading amounted to a total of 16.13 billion US dollars, a 3-percent growth compared to the same period last year.

Banking, securities and insurance sectors were not included in the monthly data, the MOC said.

FDI into the high-tech sector saw faster expansion, with the sector's actually utilized FDI rising 44.3 percent year on year and accounting for 28.8 percent of the total FDI, Gao said.

Some 87.56 billion yuan flowed into the high-tech service industry, a sharp increase of 71.1 percent year on year. FDI in services of information. R&D and design, as well as sci-tech achievement transformation surged by 68.1 percent, 77.7 percent and 62.7 percent, respectively.

Foreign investment from the Republic of Korea and Germany climbed quickly in H1 2019, posting growth of 63.8 percent and 81.3 percent year on year, respectively.