The conflict that changed China 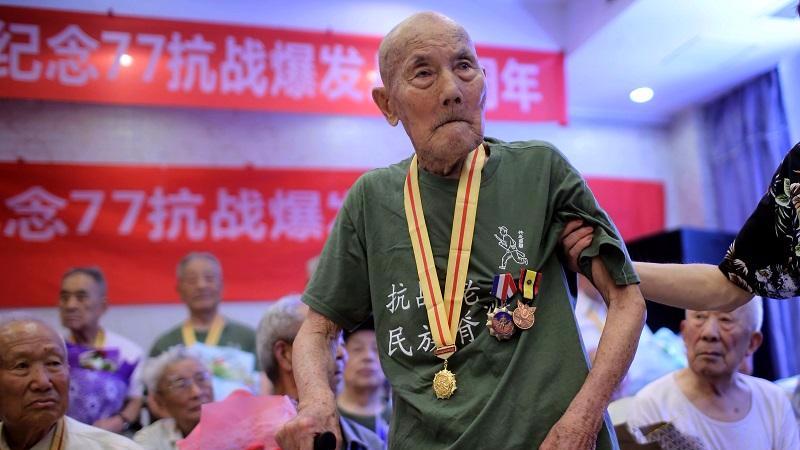 Wang Qiu, 95, and 30 other veterans gather on Thursday in Nanjing, Jiangsu province, to mark the 80th anniversary of a skirmish in Beijing that led to full-scale fighting in the War of Resistance Against Japanese Aggression (1931-45). (Yang Bo / China News Service)

"This flag I give you,

Keep it always by your side,

For it can wipe your blood while you are still alive,

And wrap your body upon your death."

Those words are from a poem in a letter written by Wang Jiantang's father on a piece of white cloth that he gave to his son as the young man left for the front lines of war in December 1937. It later served as a bandage when Wang sustained leg injuries.

A reproduction of the letter is now displayed in Beijing at the Museum of the War of the Chinese People's Resistance Against Japanese Aggression, one of the most protracted and bloody conflicts of World War II.

The letter is displayed alongside a section of tree trunk riddled with bullet holes and a metal helmet unearthed from beneath the city wall, a few hundred meters from the museum. Together, they tell a story of survival that started in Wanping county in south Beijing.

Today, many Chinese historians regard the event, known as the July 7 Incident, as the start of Japan's full-scale invasion of China and the country's long, and ultimately successful, fight against the invaders.

On the night of July 7, 1937, a Japanese army battalion stationed in the area, claimed one of its soldiers had gone missing, and was presumed captured, during a training exercise about 1 kilometer northwest of a citadel known as the Wanping Fortress. The Japanese also claimed to have heard gunfire, which they said must have come from within the citadel's walls.

At midnight, they demanded to be allowed to search the citadel, which housed the Wanping government.

The demand was refused, and at about 5:30 am on July 8, Japanese artillery began pounding the area. According to Hu Zongxiang, a soldier stationed nearby, the bombardment "destroyed five buildings, killed two people and wounded five".

The next few weeks saw sporadic fighting erupt between the two sides. Discussions were held, but Hong Dazhong, then-secretary of the Wanping government, believed the talks were nothing more than a Japanese ruse.

"For one thing, they were bringing in more and more troops. I knew they were newcomers because their dust-covered fatigues suggested they were at the end of a long journey, and their hats were unlike those worn by the soldiers I'd seen here for a long time," he said. "There were many artillerymen among them, busily unloading canons onto the platforms of the train station."

It was later revealed that the soldier, Private Shimura Kikujiro, had returned to his barracks at about 1 am on July 8, but his brief disappearance was used as a pretext for conflict.

Both Hu and Hong appear in video interviews released by the museum in preparation for an exhibition that opens on Friday, the 80th anniversary of the incident. Between 1999 and 2002, museum researchers - including Luo Cunkang, 47, now the museum's deputy director - conducted interviews with survivors and witnesses nationwide.

"During those years, we traveled all over China looking for people who were part of that crucial event. Sadly, all those we spoke with have since passed away," he said. 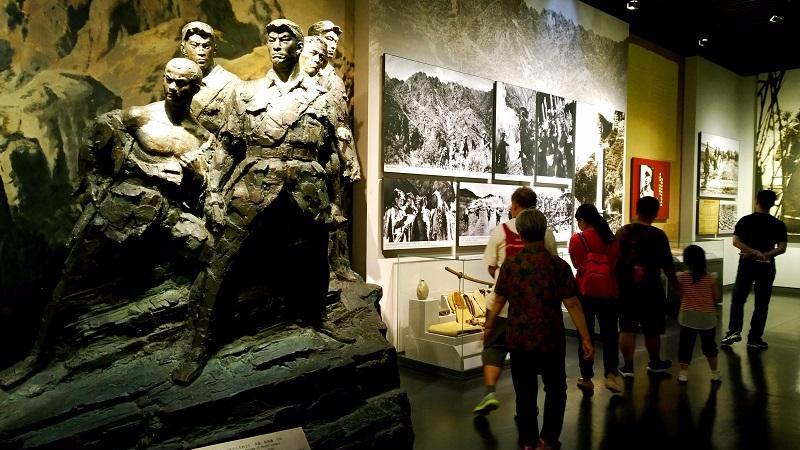 Visitors view the exhibits at the Museum of the War of the Chinese People's Resistance Against Japanese Aggression. (Lu Jinfu / For China Daily)

Cao Yi, 49, Luo's colleague and fellow researcher, remembers the veterans vividly. "The moment they started speaking, they were no longer men in their twilight years, but hot-blooded youths who thought nothing of dying," she said.

One of the video interviewees was Liu Zhao, a member of the Trainee Regiment - 1,500 students who had chosen the blood of the battlefield over the comfort of the classroom.

Liu describes the loss of young lives: "From where I stood, on the battleground, I saw three soldiers shooting at droning Japanese aircraft from the top of a blockhouse. A bomb fell over their heads and the next moment they were all gone."

"Light machine guns were the best weapons they (the Chinese) had. Most of the soldiers were given broadswords, which some of them used to engage the Japanese in close combat at the Nanyuan Airport, 20 kilometers from Wanping and fiercely fought over by the two sides, on July 28th. But that was after the Japanese bombers had almost completely destroyed all the camps," Du said.

Having spent the night of July 27 with his gun hidden under his clothes, Liu couldn't wait to join his comrades when his regiment was ordered to withdraw.

"To retreat, we had to cross an airfield that used to be our training ground. The Japanese had taken over the eastern perimeter, and as we ran, the sound of continuous shooting filled our ears," he said.

"Bullets whistled past. Fellow student soldiers were hit and fell one after another as the rest of us kept running. 'Lie down!' our instructor, a veteran, shouted. Occasionally, the Japanese needed to reload, and that's when he shouted 'Run!' and we all jumped up and started running frantically until the shooting resumed," he added.

"We did this a couple dozen times before we reached our camp at the other end of the airfield. Of the 120 people in our group, only about 40 made it."

The students tried to move further north, into Beijing, but the Japanese had cut off the shortest route, so they had to detour, ducking into expansive fields of sorghum, before eventually arriving at the Zuo'an Gate, one of the entry points to the capital.

"Chinese soldiers guarding the gate tower shouted down to us, saying they had orders not to let anyone in. Gunfire erupted as we spoke: the Japanese were coming! The next minute, we jumped into a roadside trench and provided supporting fire for those in the tower until the Japanese retreated," Liu recalled.

Still refused entry, Liu and his group traveled further west to the Yongding Gate, where, after being given permission by headquarters, the defenders used wicker baskets to lift them over the wall and into the city, one by one. At this point, only 30 of the soldier students were still alive.

"Once inside, we were surrounded by crowds of people who applauded our bravery. But all we felt was guilt: the Nanyuan Airport was lost," he said. Beijing fell the next day, and Tianjin was captured on July 30, signaling the start of Japan's eight-year invasion.

Between 1937 and 1945, about 2.6 million young men - including Wang Jiantang, the recipient of the farewell letter - left their homes in the southwestern province of Sichuan to fight the Japanese; 640,000 never returned.

The War of Resistance Against Japanese Aggression (1937-45) ravaged the land, but also united the Chinese, irrespective of political affiliation.

One telling photo in the museum's collection was taken in 1944, when 12 members of the same family posed for the snapshot, standing next to a giant date tree in front of their home in Shandong province. They were all Communist soldiers who had fought in and outside their native province in East China. 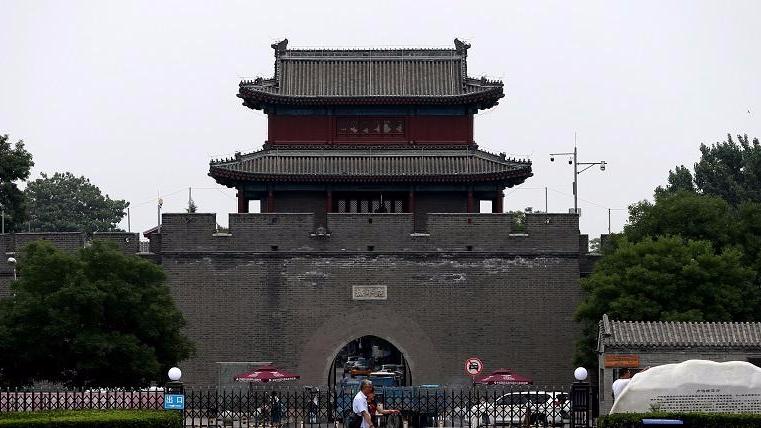 People stroll past the gate of the Wanping Fortress. (Wang Zhuangfei / China Daily)

Overseas Chinese also joined the war effort. While many donated money, others returned to China to serve as fighter pilots, drivers or mechanical engineers. About 4,000, most from Southeast Asian countries, worked along the "Burma Road", a crucial supply line linking Kunming in Yunnan province with Lashio in Burma, now Myanmar. They helped to transport about 300 metric tons of wartime materials every day.

Only 1,800 survived; the rest died in bombing raids, of disease, or were reported missing in action.

Although 2 billion people across the globe fought in WWII, the number of Chinese combatants was 450 million, 22.5 percent of the total. In all, 35 million Chinese, including civilians, died, compared with 27 million Soviet citizens, 1.2 million Britons and 1 million United States nationals.

On Sept 9, 1945, Japan formally surrendered to China at a ceremony in Nanjing, capital of Jiangsu province, 25 days after Emperor Hirohito announced his country's surrender to the Allies on Aug 15.

"On Aug 16, the firework celebrations by people of the Republic of China went on from night until the next morning. All we could do was lower our heads, and go from being Japanese soldiers to simply being Japanese," wrote Kensuke Konishi on a homemade Japanese flag he had kept since leaving his homeland in January 1945, and on which he diligently recorded the major events during his period of service. The flag is now owned by the memorial museum in Beijing.

The journey took the new recruit first to Korea and then Northeast China, both Japanese colonies at the time. From there, the Japanese army marched south, arriving in Nanjing in mid-February.

In recent years, Xu Yong, a senior researcher at Peking University in Beijing, has regularly visited Japan, where he has researched archival materials that shed light on what he believes was the "inevitability" of the July 7 Incident.

"We found a file released by the Japanese army at around 3 am on July 8, 1937, two and a half hours before they bombed Wanping. The documents say the conflict was due to 'the illegal conduct of the Chinese army'," he said. "This was the version of events used by all Japanese media in the following days. Given the time of the release, we have reasons to believe the document had actually been prepared beforehand."

There was no mention of a missing soldier in the document. In fact, in an interview published by the Japanese newspaper Asahi Shimbun on June 30, 1938, Kiyonao Ichiki, an officer who had taken part in the incident, admitted that Private Kikujiro had returned to camp before 1 am on July 8, 1937.

Du, from the memorial museum, said: "The Japanese army, by the way, was outside of Beijing at the time as a direct result of the unequal treaties signed between China and Japan in 1901. The military exercise they put on was an unambiguous gesture of provocation."

Now, despite the changes that have taken place - Wanping is now officially part of the expanded city of Beijing - reminders of the war are still visible.

The walls of the citadel, built in the mid-17th century, still carry the scars of the bombs, and 500 meters away, on the other side of the Yongding River, sits the Daiwang Temple, which served as the headquarters of the Chinese soldiers who guarded the area in 1937.

Between the county wall and the temple is the 267-meter-long Lugou Bridge, also known as the Marco Polo Bridge named after the Italian explorer (1254-1324) who raved about the 12th-century stone structure in his memoirs. The bridge, known for its 501 distinctly individual stone lions, is probably the oldest witness to the events of July 7, also known as the Lugou, or Marco Polo Bridge, Incident.

For nearly 20 days, before the Nationalists' retreat on the afternoon of July 28, Ma Buxian guarded the bridge. The river was almost dry, and the Japanese, backed by heavy machine gun fire and artillery, charged repeatedly over the muddy riverbed towards the Chinese defenders.

Ma, who appears in the museum's video footage, said he had felt no fear.

"I heard nothing but the deafening roars of my fellow Chinese," he said.