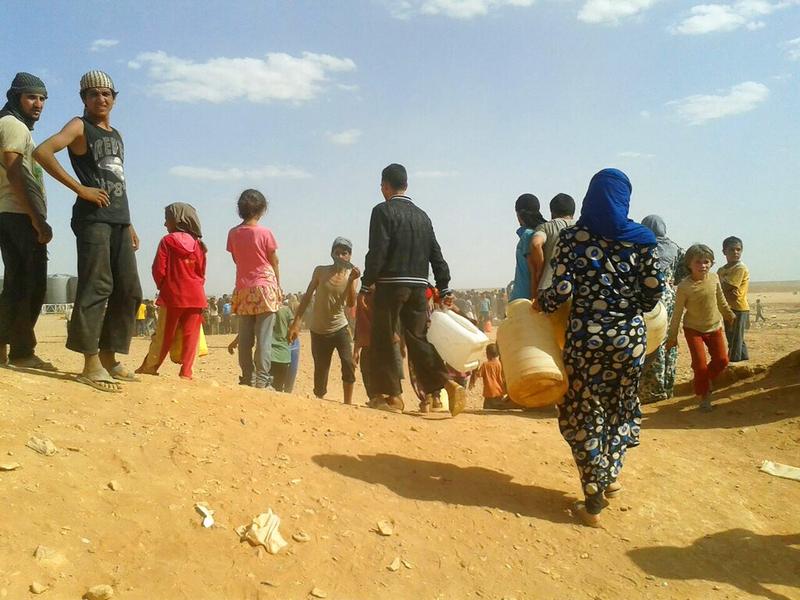 In this June 23, 2016 file photo, Syrian refugees gather for water at the informal Rukban camp for displaced Syrians, between the Jordan and Syria borders. (PHOTO / AP)

UNITED NATIONS — The UN humanitarian chief urged Syria's warring parties on Wednesday to ensure the delivery of desperately needed aid to Syrians stranded near the border with Jordan and warned again that a major military operation in extremist-controlled Idlib would be a humanitarian catastrophe.

Mark Lowcock said the UN wants an aid convoy, with more than 100 trucks accompanied by some 250 UN and Syrian Arab Red Crescent personnel, to leave for the isolated Rukban camp on the Syria-Jordan border by Feb 5. Its 42,000 people "remain stranded in deteriorating conditions since the last convoy to the area in early November," which was the first since January 2018, he said.

Lowcock also appealed for money to buy basics from blankets to baby milk and bandages for millions of Syrians living under tents or tarpaulins or in unheated buildings in severe winter conditions that have seen freezing temperatures, snowfalls and flooding that has forced tens of thousands of people to move.

His address to the UN Security Council came amid rising concern over the plight of some three million people in Idlib, which was the last major stronghold of the Syrian opposition. Earlier this month, al-Qaida-linked militants seized more than two dozen towns and villages in northern Syria from rival insurgents in the most serious blow to a September cease-fire brokered by Russia and Turkey that averted a major government offensive in Idlib province.

Lowcock said that January saw an increase in fighting between armed groups in Idlib, "placing civilians at risk and resulting in injury and death."

"Today I reiterate the importance of sustaining the Russia-Turkey agreement and remind you that a large-scale military operation in Idlib would have catastrophic humanitarian implications," he told council members.

The envoys from the United States, Britain, France and other council nations echoed Lowcock and stressed that all efforts must be made to sustain the Idlib cease-fire.

Russia's UN Ambassador Vassily Nebenzia told the council that Moscow shares concerns about the situation in Idlib and the increase in cease-fire violations, saying about a thousand cases have been reported "as a result of which 65 people have died and more than 200 have been injured." 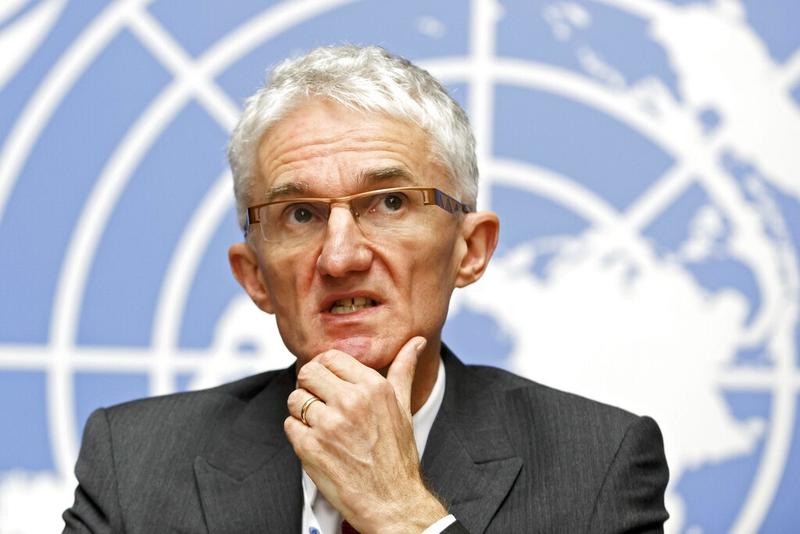 In this Dec 4, 2018 file photo, Mark Lowcock, UN Under-Secretary-General for Humanitarian Affairs, talks during a press conference at the European headquarters of the United Nations in Geneva, Switzerland. (SALVATORE DI NOLFI / KEYSTONE VIA AP)

He said the Idlib de-escalation zone has come under the control of al-Qaida-linked militants allied with the group Hayat Tahrir al-Sham. And he recalled Russia's warning "right from the start ... that freezing the situation where there are terrorists is something that is not sustainable in the long-term."

Nebenzia said after talks Sunday in Moscow between the Russian and Turkish leaders, "work was stepped up to develop effective, feasible and agreed upon measures regarding the Idlib de-escalation zone."

He gave no details but reiterated that Russia continues to believe that the "the best solution for stabilizing the situation in the northwest or the northeast of Syria" is to transfer the areas' control to the Syrian government.

As for the aid convoy to the Rukban camp, Jordan closed the border over security concerns and the Syrian government and its ally Russia have blamed US troops stationed nearby for failing to provide security for aid shipments  — allegations denied by the Americans.

Lowcock, the undersecretary-general for humanitarian affairs, said the UN received verbal approval on Jan 27 for the convoy to proceed as well as security guarantees from Russia and international coalition forces.

"Planning is now under way for loading of the trucks to begin before the end of this week, and for them to set off by Feb 5," Lowcock said. "We call on all parties to ensure that this goes ahead without any further delay."

Acting US Ambassador Jonathan Cohen said the convoy "is vital," but "sustained humanitarian access is crucial."

Kuwait, Belgium and Germany, who are in charge of humanitarian resolutions on Syria, echoed that view saying almost 12 million Syrians are in need of humanitarian aid including more than 5 million children according to UN statistics.

Kuwait's UN Ambassador Mansour Al-Otaibi, speaking on behalf of the three countries, said about 80 percent of the people in Rukban camp are women and children.

"A cease-fire, not only in Idlib, but nationwide, would enable the flow of humanitarian assistance and the evacuation of the wounded and sick," he said.