Iron painting is reshaped for a new era 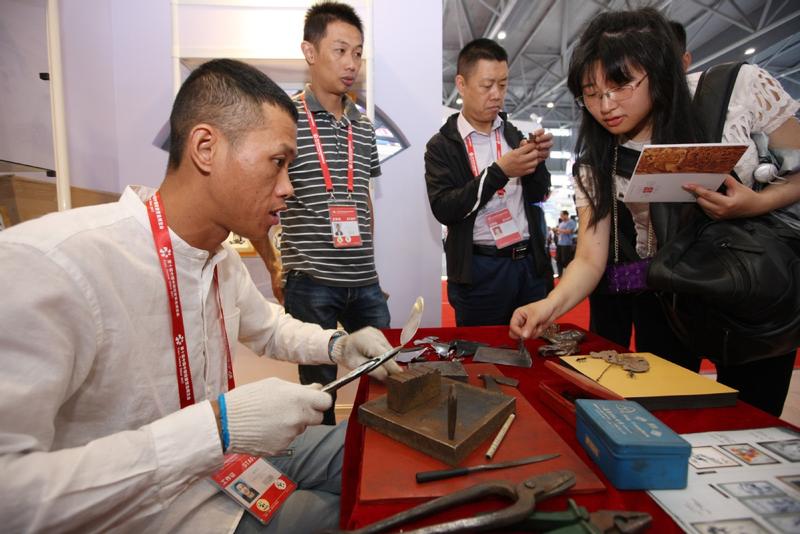 In this undated photo, visitors watch a demonstration of Wuhu iron painting at an exhibition in Hefei, Anhui province. (HU WEIGUO / FOR CHINA DAILY)

HEFEI－As Xu Gang lays an iron rod on an electric welding machine, the high temperature instantly reddens and softens it.

He immediately bends the rod and shapes it with a hammer. Soon, an iron crane takes form.

Xu is an "iron painter" in the city of Wuhu, Anhui province. The city has abundant iron mines, and iron painting became an important part of local art thanks to advanced metal refining skills in ancient China and the emphasis on traditional culture.

Recently, Xu's iron paintings stole the spotlight at the Jiuzi Old Town in Wuhu last month, when the expanded tourist attraction officially opened to the public as part of the local government's attempts to promote the province's cultural heritage.

Artists use hammers, tongs, iron blades and rods to create a variety of shapes and forms. China listed the craftsmanship as a national intangible cultural heritage in 2006.

Before Xu became an iron painter, he was an ordinary, skilled worker at an iron plant in Wuhu.

"Although I was working at the iron plant, my heart yearned for iron paintings," he said.

In Wuhu, there were already workshops specializing in iron paintings, and Xu made up his mind to learn the art.

"The lessons were basically one-on-one," Xu recalled. "There was no systematic way of teaching, so we had to follow our masters very carefully."

To craft a good painting, it is important to understand the delicate strength when making the curves of iron.

At first, Xu did not master the techniques, and his failures often frustrated him. However, he would spend hours learning until he owned the skills.

"It was boring. We mainly spent our time pounding the iron rods to learn about precision," he recalled. "I needed to make sure that every blow pounded the thin iron wires."

Xu said he would beat the rods thousands of times a day. The practice lasted a month, before he started working on entire paintings. "Because there were sparks everywhere, it was normal to get burned," Xu said. "It was tiring, but I am glad I made it."

Xu said iron painters often have burns on their hands, and the fingerprints on their thumbs, index and middle fingers because they are constantly bending the iron wires with their hands.

"We need to have a picture first, fire the furnaces, and bend the iron rods into the shapes and add lacquer and color," he said.

"Works like the crane I can swiftly create because I have done it so many times."

But for tailor-made products, it usually takes more time and energy. "There are no two identical iron paintings in the world," he said. "Every painting is unique."

Xu said that the majority of iron paintings are not adorned with colors these days because "the black color perfectly represents the styles of Chinese calligraphy and brush paintings."

The intricacies involved in the craft have scared away many young people from learning the craftsmanship.

"You need to have a deep understanding of iron paintings and work really hard," he said.

In 2017, the Wuhu government issued a regulation to protect iron painting. It encouraged colleges and vocational schools in the city to set up courses to produce artists in the field.

Xu said he is working with universities to increase the art's influence among young people.

"I often invite students to come over to visit, and we communicate," Xu said. "I want them to appreciate the essence of the art."