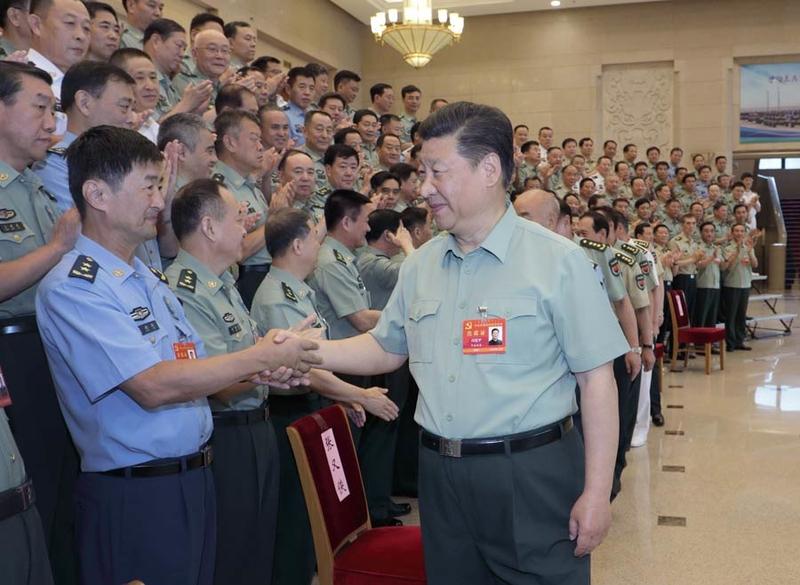 Xi Jinping, general secretary of the Communist Party of China Central Committee, president, and chairman of the Central Military Commission, greets delegates at a CMC meeting on Party building held from Friday to Sunday in Beijing. (LI GANG / XINHUA)

President Xi Jinping has called for efforts to extensively strengthen the leadership of the Communist Party of China and Party building in the country's armed forces to offer effective political support in breaking new ground in pursuit of a stronger military.

Xi, also general secretary of the CPC Central Committee and chairman of the Central Military Commission, was speaking at a CMC meeting on Party building held from Friday to Sunday in Beijing, attended by senior military leaders.

Strengthening CPC leadership and Party building in the military is required to advance the "great new project" of Party building and the building of a strong country with a strong military, Xi said.

The whole military should comprehensively implement the Thought on Socialism with Chinese Characteristics for a New Era and the spirit of the 19th CPC National Congress, Xi added.

Xi ordered the armed forces to maintain absolute loyalty to the Party, regulate officers and soldiers with Party regulations and discipline, and focus on boosting their combat capabilities to make sure that their goals and missions set by the Party in the new era can be accomplished.

Xi recalled that after the 18th CPC National Congress in 2012, the CPC Central Committee and the CMC made all-out efforts to improve Party leadership and Party building inside the military, which consequently became a solid political foundation for the military's historic achievements and reform.

Xi asked the military to spare no effort in overcoming obstacles and shortcomings in Party building and to enhance Party organizations.

Every important decision in a military unit must be made by the unit's Party committee, Xi said.

Xi requested that senior Party officials of the military should keep fostering political awareness and ability, and should boost capabilities in terms of strategic planning, combat preparedness, reform and innovation, as well as unit management.

The military must pay more attention to the training of officers and talented people, Xi said.

Commanders should hone young talent by placing them in crucial positions, Xi said.

He demanded that more resources should be allocated to the training of joint-operation commanders, professionals of new types of fighting forces, high-level science and technology researchers, and top-tier strategic planners.

Military leaders should encourage talented people and help stimulate their enthusiasm and creativity, according to Xi.

In addition, Xi said the fight against corruption and extravagance, as well as bureaucracy, will continue inside the military.

The anti-corruption fight must be unswervingly pursued, and will not change direction or form, Xi said, adding that there will be zero tolerance for anyone who violates discipline, regulations or laws.

He also ordered that the armed forces must administer troops in accordance with laws, regulations and discipline.