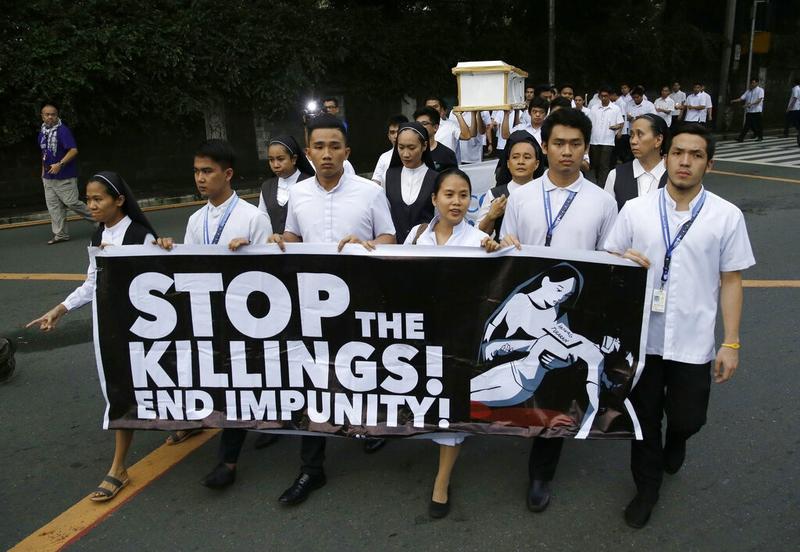 In this Aug 29, 2018, file photo, seminarians and nuns carry slogans and a mock coffin during a rally in Manila, Philippines, against drug-related killings and martial law. (AARON FAVILA / AP)

MANILA, Philippines — Amnesty International urgently called for international pressure and an immediate UN investigation to help end what it says are possible crimes against humanity in the Philippine president's bloody anti-drug crackdown.

The London-based rights watchdog said in a study released Monday that extrajudicial killings in President Rodrigo Duterte's 3-year-old campaign remain rampant and the scale of abuses has reached "the threshold of crimes against humanity."

About 6,600 people, most of them accused of petty drug crimes, have been killed in the crackdown Duterte launched as his centerpiece project when he took office in mid-2016

About 6,600 people, most of them accused of petty drug crimes, have been killed in the crackdown Duterte launched as his centerpiece project when he took office in mid-2016. But nongovernment groups claim a much higher death toll, including many suspects killed by motorcycle-riding gunmen human rights groups suspect were financed by police officers.

There was no immediate government reaction to Amnesty's report but Duterte and the police have denied any authorization of extrajudicial killings. Duterte, however, has repeatedly threatened drug suspects with death in televised speeches and encouraged law enforcers to shoot suspects who fight back. He has warned the crackdown would be more dangerous for suspects in the final three years of his six-year term.

Amnesty said Bulacan province north of the capital has become "the country's bloodiest killing field" after some officers involved in the crackdown were transferred there from the Manila metropolis, which used to be the "epicenter of killings."

"Within marginalised communities, police continue to kill with total impunity, fueling a pervasive climate of fear in cities, towns and neighbourhoods," Amnesty said in its study. "The reliance on violent and repressive policies continues to perpetuate human rights violations and abuses in the country."

The group said it investigated 20 drug-related incidents in which 27 people were killed across Bulacan from May 2018 to last April by interviewing witnesses, families of the dead, local officials and rights activists.

Slain suspects, who struggled to earn a living, were accused of being "big-time" drug dealers, Amnesty said, citing interviews with families of suspects. Police officers always justified the deaths by claiming that suspects fought back during so-called "buy-bust" operations, where undercover agents posed as drug buyers, but Amnesty said it doubted the police reports, saying they did not "meet the feeblest standards of credibility."

Some suspects who police claimed fired back were too poor to buy a gun. Others died after police forcibly broke into homes and opened fire then later claimed the suspects fought back after sensing they were being entrapped in police "buy-bust" transactions, Amnesty said, citing accounts by suspects' relatives and witnesses.

Amnesty also questioned the legitimacy and accuracy of drug "watch lists," which it said contain the names of drug suspects targeted in police raids.

The group called on the UN Human Rights Council to immediately initiate an investigation into the killings. It asked an International Criminal Court prosecutor to hasten the examination of complaints sparked by the massive deaths for The Hague-based tribunal to open a separate investigation.

Foreign governments should "use all diplomatic and political tools at your disposal to put pressure on the Philippines to immediately end all crimes" committed under the crackdown and stop foreign aid or any support that may contribute to the commission of human rights violations by police officers," Amnesty said.