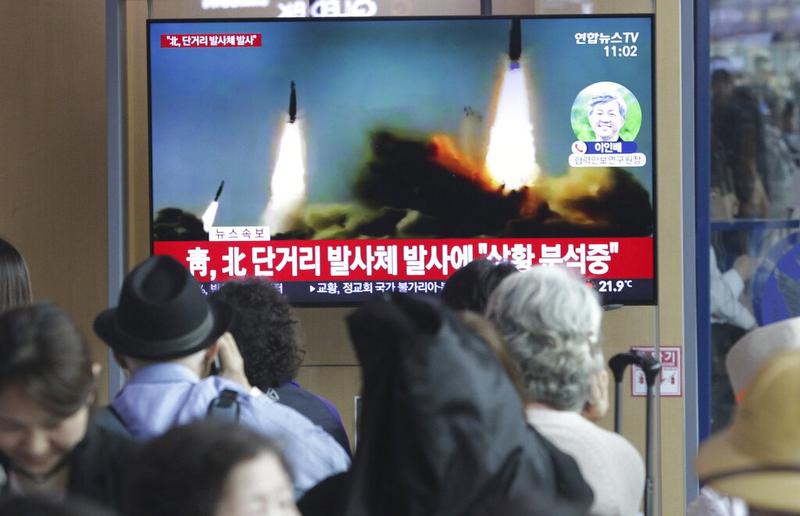 People watch a TV showing a file footage of the Democratic People’s Republic of Korea's missile launch during a news program at the Seoul Railway Station in Seoul, the Republic of Korea, May 4, 2019. The DPRK fired several unidentified short-range projectiles into the sea off its eastern coast on Saturday, according to the ROK Joint Chiefs of Staff. (AHN YOUNG-JOON / AP)

SEOUL – The presidential Blue House of the Republic of Korea (ROK) expressed deep worry Saturday over launchign of short-range projectiles by the Democratic People's Republic of Korea (DPRK), saying the launches escalated tensions on the Korean Peninsula.

The DPRK launches went against the purpose of the inter-Korean comprehensive military agreement, Blue House spokesperson Ko Min-jung said in a statement.

The spokesperson urged Pyongyang to stop such launches that escalate military tensions on the peninsula.

The statement came after the DPRK fired unidentified short-range projectiles off its east coast Saturday morning.

Several projectiles were launched towards the northeast from the DPRK's east coast city of Wonsan for 21 minutes from about 9:06 am local time (0006 GMT) Saturday, according to ROK Joint Chiefs of Staff (JCS).

The projectiles traveled some 70 km to 200 km into the eastern waters. Further details were being analyzed by the military authorities of the ROK and the United States.

Following the DPRK's projectile launches, the top national security advisor for ROK President Moon Jae-in, the country's intelligence agency chief and the defense minister gathered at the national crisis management center to closely monitor situations and assess why the DPRK fired the projectiles.

The ROK and US military authorities shared detailed information on the launches, precisely analyzing what type of projectiles were fired, according to the Blue House.

The ROK paid attention to the launches that came at a time when dialogue on the denuclearization of the Korean Peninsula came to a lull, calling for the DPRK to actively join efforts to rapidly resume the denuclearization negotiations, said the Blue House spokesperson.

If necessary, the ROK will closely communicate with neighboring countries, she added.

The projectile firings came months after the second summit between top DPRK leader Kim Jong-un and US President Donald Trump ended with no agreement in at the Vietnamese capital of Hanoi.

An unnamed ROK military official was quoted by Yonhap news agency as saying the projectiles were not believed to have been ballistic missiles. The DPRK is banned from testing ballistic missiles under UN Security Council resolutions.

On April 17, the DPRK tested a new tactical guided weapon, which was not seen by the ROK as a ballistic missile. 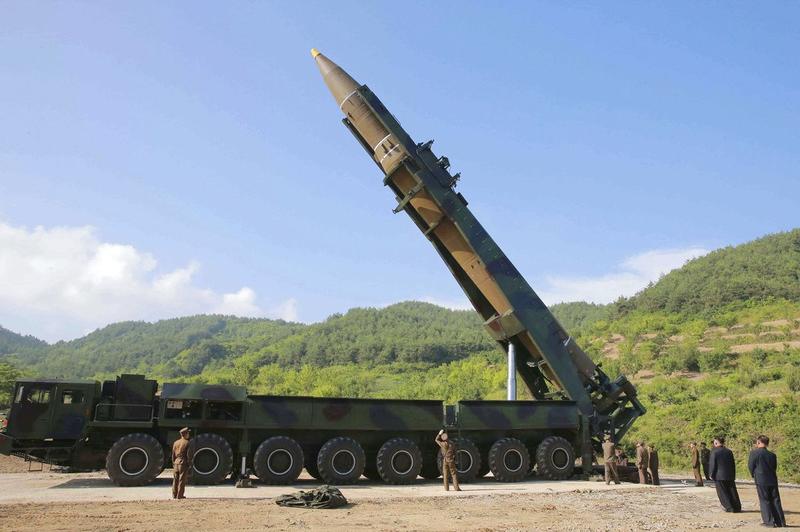 In this July 4, 2017 file photo distributed by the DPRK government, DPRK leader Kim Jong-un, second from right, inspects the preparation of the launch of a Hwasong-14 intercontinental ballistic missile. (KCNA / KOREA NEWS SERVICE VIA AP)

The JCS said the ROK military intensified defense readiness and surveillance in preparation for the DPRK's possibly additional launches, adding that it maintained a full readiness in close cooperation with the US.

Kang and Pompeo agreed to conduct additional analyses on the launches and cautiously tackle it while continuing communications. Kang also held phone talks with her Japanese counterpart Taro Kono.

Lee and Biegun agreed to keep communicating with each other at every level about the issue. Lee also had telephone talks with his Japanese counterpart Kenji Kanasugi.