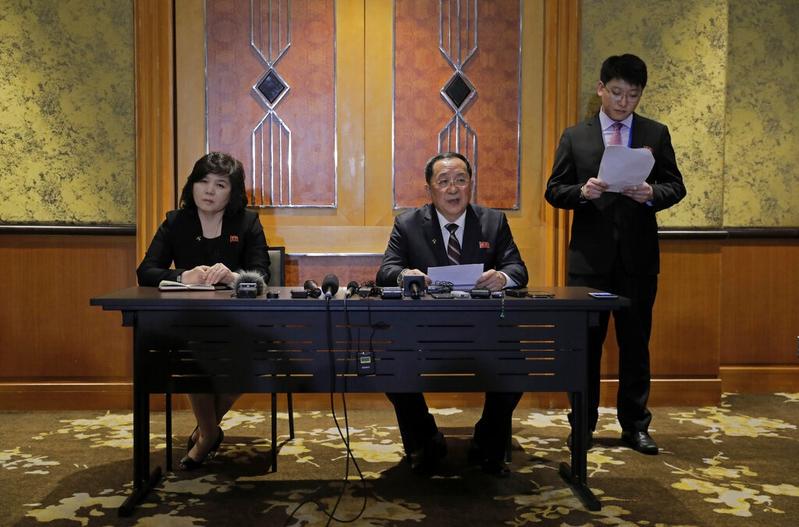 As the second summit between US President Donald Trump and the Democratic People's Republic of Korea (DPRK)'s leader Kim Jong-un ended without a joint agreement, DPRK officials held an impromptu middle-of-the-night news conference at a Hanoi hotel on Friday, offering an account that differed from Trump's.

"What we proposed was not the removal of all sanctions, but the partial removal," Foreign Minister Ri Yong-ho said through an interpreter in Hanoi, adding that the DPRK only asked for those sanctions impeding the livelihood of its people to be removed first.

DPRK's foreign minister said the DPRK sought relief from five UN sanctions imposed in 2016 and 2017 that hurt the country’s economy, out of a total of 11, in exchange for disabling its main nuclear complex

He said the DPRK sought relief from five UN sanctions imposed in 2016 and 2017 that hurt the country’s economy, out of a total of 11, in exchange for disabling its main nuclear complex.

But on Thursday, Trump said at his own news conference after the two leaders’ meeting that Kim "wanted the sanctions lifted in their entirety, and we couldn't do that."

Ri said in exchange for partial sanctions relief, Pyongyang was willing to "permanently and completely dismantle all the nuclear material production facilities in the Yongbyon area, including plutonium and uranium in the presence of US experts."

In addition, Ri said Pyongyang would also put a "permanent halt" on nuclear and long-range missile testing, "in order to lower the concerns of the United States."

He said given the "current level of confidence" between the DPRK and the US, the proposal "was the biggest denuclearization measure we could take."

Ri said that during the bilateral meeting, the DPRK expressed intent to make commitment on permanent halt of the nuclear testing and long-range rocket launch test in written form in order to address the concern of the United States.

"However, during the meeting, the United States insisted that we should take one more step besides the dismantlement of nuclear facilities in Yongbyon area," Ri said. "Therefore, it became crystal clear that the United States was not ready to accept our proposal."

He stressed that the DPRK's principle stand will remain unchanged if the United States proposes negotiations again in the future.