CES 2019: A high-tech spin for the old-school peephole

LAS VEGAS — The CES 2019 gadget show is revving up in Las Vegas. Here are the latest findings and observations from Associated Press reporters on the ground. 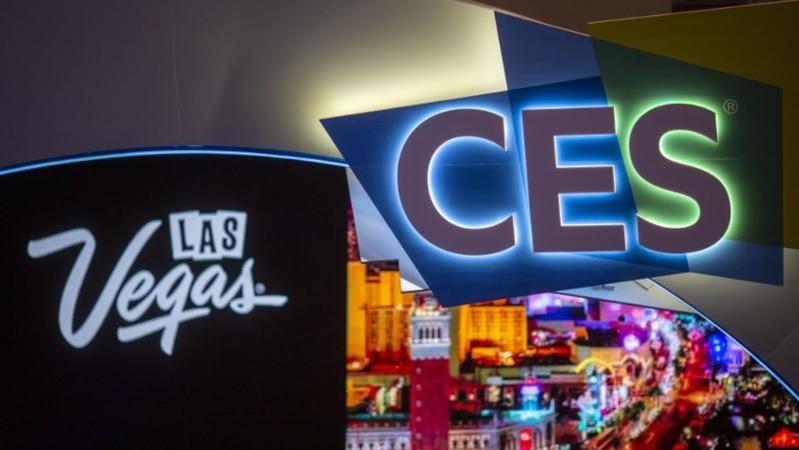 In this photo taken on Jan 8, 2019, the CES logo is seen inside the Las Vegas Convention Center during CES 2019 in Las Vegas. (DAVID MCNEW / AFP)

DING-DONG, THE PEEPHOLE IS RINGING

Ring is giving the old-school peephole a high-tech spin.

The company unveiled a new internet-connected video doorbell that fits into most peepholes. The new device is aimed at apartment dwellers or college students who want a video doorbell, but may not be allowed to install one next to their doors.

Amazon bought Ring last year, giving it a shot at competing better with Google's Nest, which also makes cameras and doorbells. Privacy experts have long sounded the alarm on Wi-Fi connected cameras and how video is stored. Amazon recently filed a patent application for a facial-recognition system involving home security cameras, which would allow multiple cameras to create composites of faces to identify people who may be trying to burglarize a house. It doesn't appear Ring uses facial recognition yet, as Nest already does, though Ring may add such features over time. Amazon did not respond to a request for comment.

Ring's Door View Cam will go on sale in March for US$199. Ring's new device will still act as a peephole, but will also send alerts to user's smartphones when the doorbell is pressed or someone knocks the door. 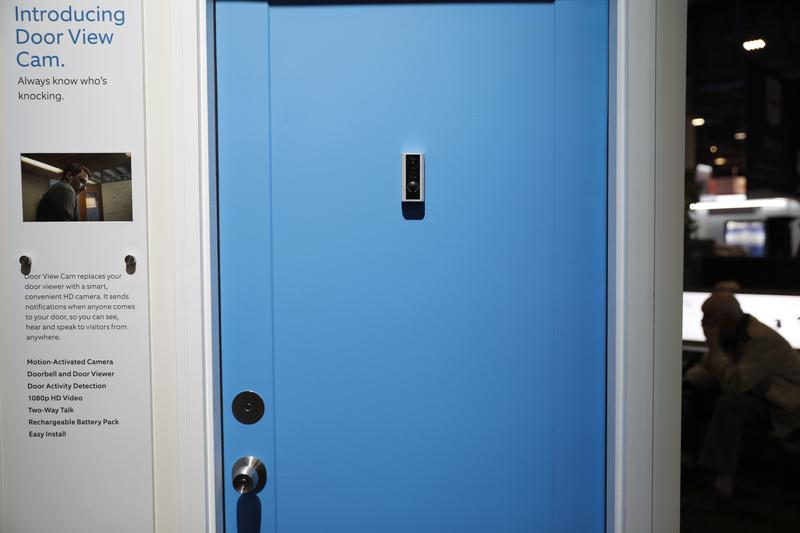 In this photo taken on Jan 7, 2019, the new Door View Cam is on display at the Ring booth before CES International, in Las Vegas. (JOHN LOCHER / AP)

EYE OF THE BEHOLDER?

The makers of a robotic "personal massager" for women won a prestigious CES award. Then organizers took it away.

Its maker, the startup Lora DiCarlo, was also banned from exhibiting on the show floor (though it's in Las Vegas at a separate media event).

The show's organizer, the Consumer Technology Association, said in an email to Lora DiCarlo that it reserved the right to disqualify any entry "deemed by CTA in their sole discretion to be immoral, obscene, indecent, profane or not in keeping with CTA's image."

Ose's makers say it's sexism, noting that "a literal sex doll for men launched on the floor at CES in 2018." Lora Haddock, the CEO of Lora DiCarlo, says that makes for a double standard at the tech show already under fire for not including enough women. 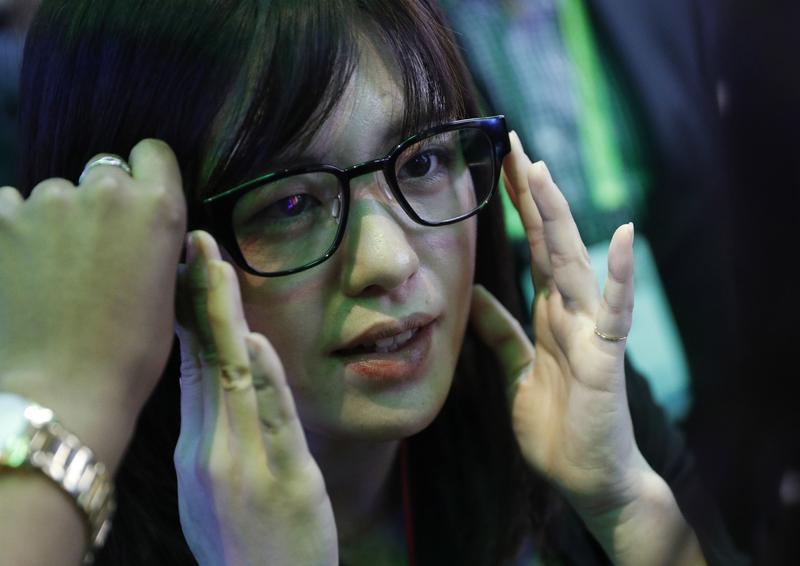 In this photo taken on Jan 9, 2019, Yumi Dobashi tries on the Focals smart glasses at the North booth at CES International in Las Vegas. (JOHN LOCHER / AP)

Smart glasses haven't been a hit, but at least one startup still sees them in our future.

A company called North will be delivering its US$999 smart glasses to customers in the coming weeks. Called Focals by North, they pair with a smartphone and show text messages, weather and mapping directions on the glass that only the wearer sees.

Users also need to wear a ring with a joystick on their index finger, so they can flip through messages or respond with their thumb. It can also be controlled using the built-in Amazon Alexa voice assistant, but the joystick has to be pressed down for it to start listening.

Getting people to buy smart glasses has been a challenge — Google famously stopped selling its smart glasses to the public about four years ago.

Aaron Grant, North's co-founder, says his product is different because they are designed to look like regular frames. And prescription lenses can be added.

But there's a small projector on one side, and the frames on the side are slightly thicker. 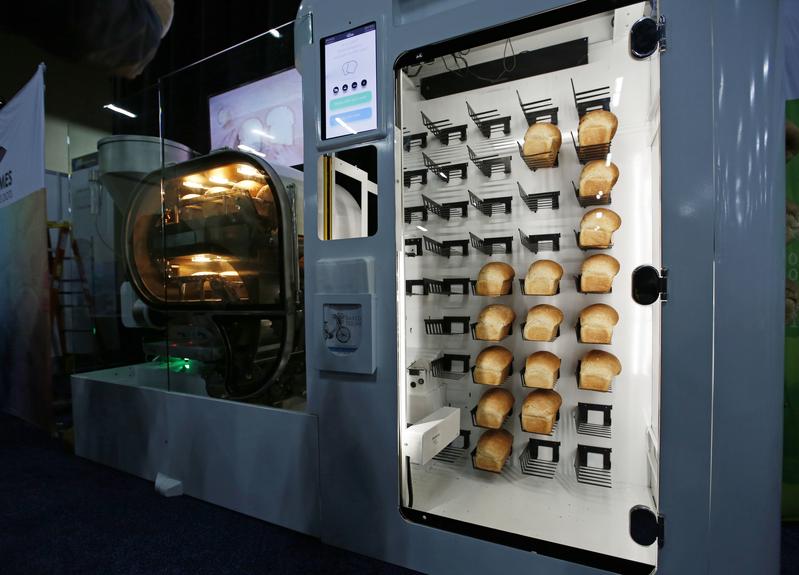 In this photo taken on Jan 6, 2019, the Breadbot automatic bread baking machine is on display at the Wilkinson Baking Company booth during CES Unveiled at CES International in Las Vegas. (JOHN LOCHER / AP)

That smell wafting through the CES show? Freshly baked bread.

Wilkinson Baking Co. unveiled a 22-square-foot machine that can bake 10 loaves of bread every hour — no baker needed. But a human is needed to dump the ingredients into the machine, which then mixes them, forms the dough and starts baking. Someone also needs to slice the bread, although the company says it's working on a way for the machines to do that, too.

The BreadBot, as it's called, is being pitched to supermarkets as a way to deliver fresh bread to shoppers who are increasingly worried about the ingredients in their foods. The machine is covered in glass, so customers can watch bread get made. They then select the loaf they want on a touch screen, sort of like a vending machine.

Three local supermarkets are already testing it. The company says a couple of big chains have agreed to try it out soon, but it won't say which. 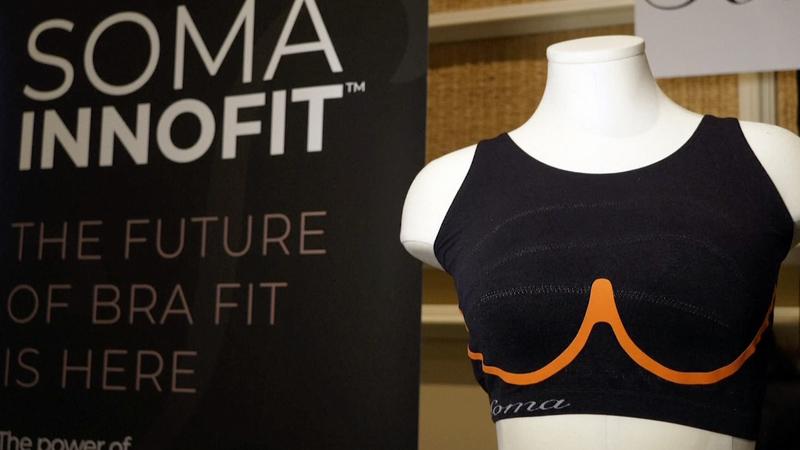 In this Jan 8, 2019 photo, the Soma Innofit bra is displayed at CES International in Las Vegas. (PHOTO / AP)

Is your bra dumb? An underwear company is pitching a solution to an age-old problem for women: finding a bra that actually fits.

In the past, women could get help from an expert human in finding their right size. A simple measuring tape wouldn't do, as it doesn't reflect other factors such as the shape of a woman's breasts. But these old-school "bra fitters" are hard to find these days.

To address that, a company called Soma has added some circuits to a brassiere and connected it to an app.

The Soma Innofit has four lines of circuitry hooked up to a circuit board in the back, which then connects to an app via Bluetooth. The smart US$59 bra then recommends a bra — from Soma's line, of course.

The smart bra isn't meant for regular wearing, though it could be used again if sizes change because of pregnancy or other factors. The company says people who don't want to buy one can use it at a Soma store.