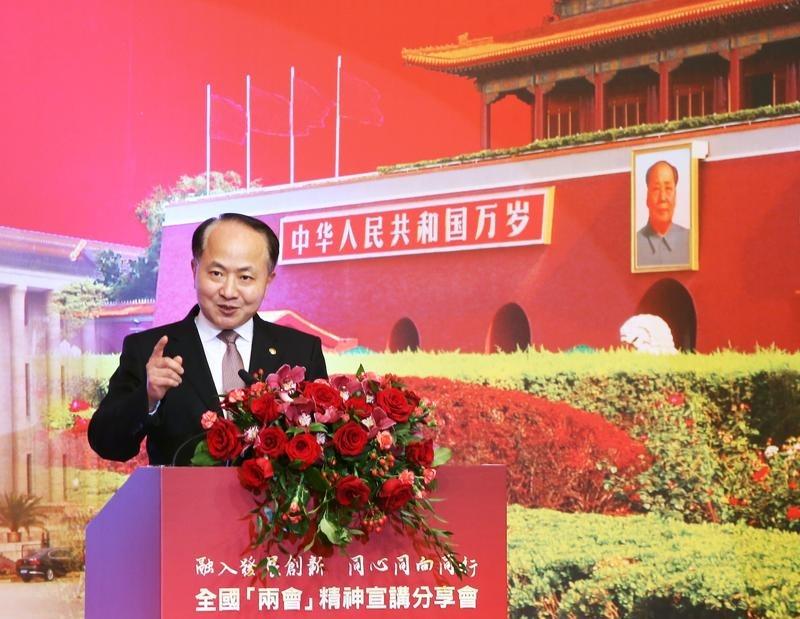 Wang Zhimin, director of the Liaison Office of the Central People’s Government in the Hong Kong Special Administrative Region delivers a speech at a seminar held in Hong Kong on March 20, 2019 on the just-concluded annual two sessions. (EDMOND TANG / CHINA DAILY)

The head of the central government’s top liaison body in the Hong Kong Special Administrative Region has called for more innovative attempts at formulating policies and regulations as development in the Guangdong-Hong Kong-Macao Greater Bay Area gathers steam.

Wang Zhimin – director of the Liaison Office of the Central People’s Government in the HKSAR -- made the call at the opening of an equestrian competition at Conghua Racecourse in Guangdong province over the weekend.

Set up by the Hong Kong Jockey Club, the racecourse is the club’s first such project on the Chinese mainland and is also the mainland’s first world-class racecourse.

Wang called the project a significant outcome of cross-boundary collaboration and innovative explorations by the governments of Guangdong province and the Hong Kong SAR.

He said it shows the huge potential in equestrian sports development in the Bay Area, as well as the enormous benefits to be derived from promoting the region’s tourism industry.

Moreover, the racecourse has set a good example for future cross-boundary cooperation in this area.

For greater development of the Bay Area, Wang urged local governments in the region to maintain the spirit of innovation when formulating policies and regulations for future cooperation.

To support the development of equestrian sports and related industries in the Bay Area, the region’s newly released development outline vowed to strengthen cooperation between Hong Kong and the mainland in areas like cross-boundary inspection, quarantine and customs clearance of horses, forage grass and fodder, veterinary medicine, and biological products.

Some of the guests, including Zhang and Wang, visited Guangzhou and Dongguan to gain a deeper understanding of the latest results in technology development, as well as youth entrepreneurship in the Bay Area. The tour ended on Sunday.

In Guangzhou, the delegation visited an incubation center for young entrepreneurs from Hong Kong and Macao SARs, a new economic area in Nansha district, and several technology companies.

In Dongguan, they toured two new economic zones and Huawei Device – a giant in the telecommunications industry.