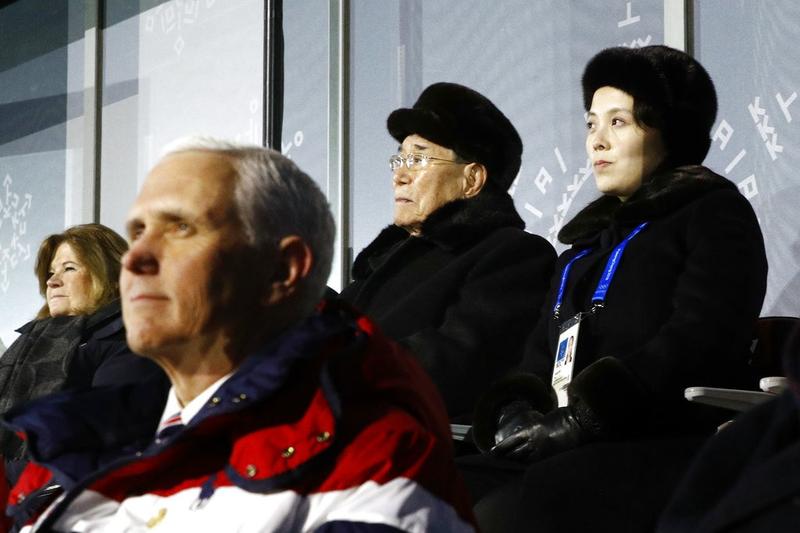 Kim Yo-jong, top right, sister of the Democratic People’s Republic of Korea’s top leader Kim Jong-un, sits alongside Kim Yong-nam, resident of the Presidium of the DPRK Supreme People's Assembly, and behind US Vice President Mike Pence as she watches the opening ceremony of the 2018 Winter Olympics in Pyeongchang, Feb 9, 2018. (AP / PATRICK SEMANSKY, POOL)

PYONGYANG – The Democratic People's Republic of Korea (DPRK) has condemned US Vice President Mike Pence’s verbal attack on top DPRK leader Kim Jong-un’s sister by labeling her as "the center of a vicious regime."

Kim's sister, Kim Yo-jong, attended the opening ceremony of the Pyeongchang Winter Olympics in the Republic of Korea (ROK) on Feb 9.

Pence, who also attended the opening ceremony of the games, reportedly said at a conservative group meeting in Maryland State on Feb 23 that Kim Yo-jong, who is officially a first vice department director of the Central Committee of the Workers' Party of Korea (WPK), is "the center of a vicious regime" and "a central pillar of the most tyrannical and oppressive regime on the planet."

A spokesman of the Korea Asia-Pacific Peace Committee said in a statement issued late Saturday night that Pence's speech was a "disgraceful behavior" and "an act of rogue without an equal in the world."

"Unpardonable are that Pence dared to defame the inviolable DPRK government, terming it 'dictatorial regime,' and absurdly slandered our congratulatory missions including the first vice department director of the WPK Central Committee," the spokesman said in the statement.

The statement was read out by a male broadcaster of the Korean Central Television.

He said the DPRK's army and people are "sharing their destinies with their leader and their social system to find out and punish without mercy those insulting the dignity of the supreme leadership and the social system of the DPRK no matter whoever and wherever they are."

The statement came before the closing ceremony of the Winter Olympics in Pyeongchang Sunday evening.

Ivanka Trump, the daughter of US President Donald Trump, is scheduled to attend the ceremony, so is a high-level delegation from the DPRK.

The spokesman ruled out any contact with the US side at the closing ceremony by the DPRK delegation, saying, "We will never have face-to-face talks with them even after 100 years or 200 years."